People in China are seeking more exquisite high-end consumer goods with their spending on both imports and foreign brands continuing to be a key driver for consumption upgrade, according to a new report from e-commerce giant JD's Consumption and Industry Development Research Institute. 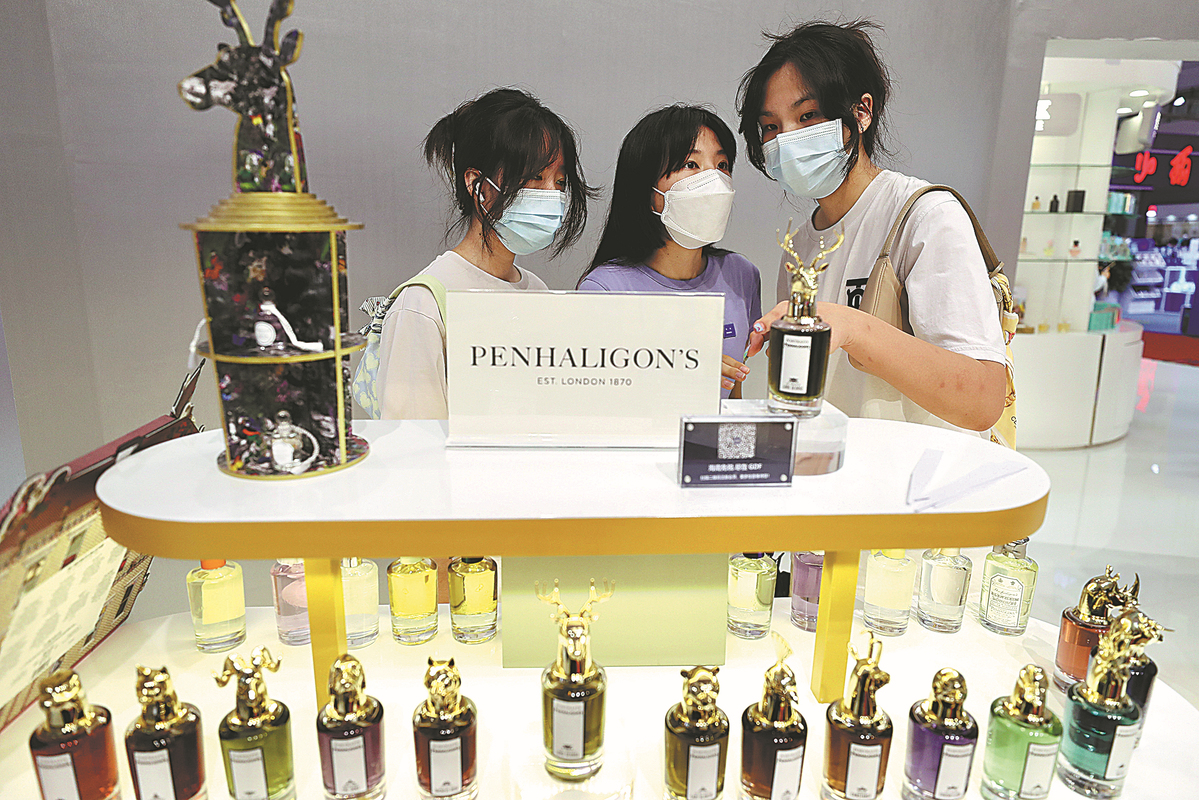 The country's consumer goods market is gaining growth momentum fueled by better containment of the COVID-19 pandemic and a series of stimulus measures to spur consumption, industry experts said, adding that the recovery of spending sentiment will inject strong impetus into the global economy.

The report, which was released during the ongoing second China International Consumer Products Expo, said young people aged between 26 and 35 are the major demographic eyeing imports and foreign brands, accounting for nearly half among all age groups.

In addition, consumers between 46 and 55 have evinced increasing enthusiasm for overseas brands, as their spending on imports increased 283 percent in 2021 compared with that in pre-COVID 2019.

Mobile phones, computers, maternal and infant commodities, beauty and skincare products, and home appliances are the most favored categories by Chinese consumers among all imported products, the report noted. For instance, sales of foreign-branded mobile phones accounted for more than 30 percent of all imported goods in the first half.

Generation Z consumers, those born between the mid-1990s and the early 2010s, are more willing to buy watches, eyeglasses, jewelry and digital products from international brands, whereas senior shoppers favor food, beverages, clothing and adult beverages, according to the report.

In the first half, consumers from first and second-tier cities accounted for 55 percent of the sales of imported consumer goods. Meanwhile, rising interest in foreign brands has also been seen in rural areas. According to JD sales data, the transaction volume of global-branded products generated from rural areas grew 174 percent in 2021 compared with that in 2019.

China's cross-border e-commerce sector has been growing exponentially over the past few years as the country's middle and high-income shoppers are demanding increasingly diversified and personalized products and services. The Ministry of Commerce said total imports of consumer goods reached 1.73 trillion yuan ($255.7 billion) in 2021, up 9.9 percent year-on-year.

"In the long run, the strong resilience and immense potential of consumption will remain unchanged, and consumption will play a bigger role in driving economic growth," said Wang Yun, a researcher with the Academy of Macroeconomic Research, adding that Chinese shoppers are pursuing high-quality and diversified products, given their steady income growth.

"With expanding domestic demand and advances in emerging retail technologies, China has introduced preferential policies, such as lowering import taxes and expanding the range of goods allowed to be imported. This has prompted a surge in cross-border e-commerce imports despite the COVID-19 pandemic, underlining a period of rapid growth for China's imported goods market," said Zhang Tianbing, head of Deloitte Asia-Pacific's consumer products and retail industry.

Zhang said overseas brands are moving to cross-border e-commerce platforms as they expand their distribution channels in light of COVID disruptions to offline retail.

The number of imported stock keeping units or SKUs surged 51 percent on a yearly basis in the first six months, and the transaction volume of more than 400 brands through JD Worldwide－the company's cross-border e-commerce platform－skyrocketed by more than 100 percent during this year's June 18 online shopping festival, JD said.