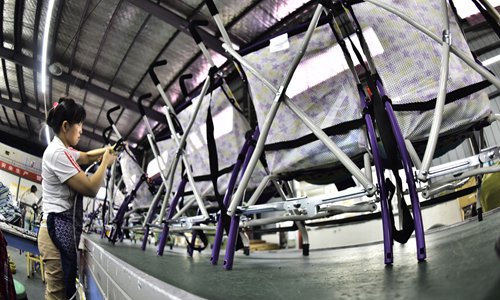 Employees produce prams for export to countries including India at a factory in East China's Anhui Province in June 2017. Photo: IC 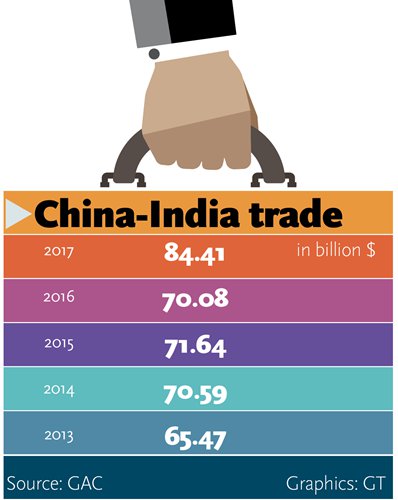 India has launched a series of anti-dumping probes against Chinese products in sectors including chemicals, textiles and steel since the beginning of the year, and experts said India should avoid abusing such measures as trade friction will harm both countries.

On the website of China's Ministry of Commerce (MOFCOM), the Global Times found that India has so far launched about eight anti-dumping investigations against Chinese goods in 2018.

Also, the country launched anti-dumping probes into imports from China of Dimethylformamide on January 22, coated paper on January 23 and Meta-Phenylene Diamene-4-Sulphonic Acid on January 24, MOFCOM said.

India has frequently adopted trade remedy measures against China during recent years because it feels pressure from competition with Chinese industries as India's industrial structure is similar to that of China, He Weiwen, senior fellow with the Beijing-based Center for China and Globalization, told the Global Times on Thursday.

Zhuang told the Global Times on Thursday that the China-made products probed by India are ones with which India has a similar competitive advantage.

The trade imbalance between China and India is another key factor, experts said.

China's trade with India was about $84.41 billion in 2017, with imports from India reaching about $16 billion and exports from China worth around $68 billion, according to data released by China's General Administration of Customs on January 12.

Experts said that China has not deliberately sought a trade surplus with India and the country should not blindly blame China for the trade deficit.

During the past two years, India has continuously increased trade probes against Chinese products. In 2016, India initiated 21 investigations against Chinese goods, more than any other country, even the US, which launched 20 trade remedy probes, according to MOFCOM data.

India should be more cautious and restrained in employing trade remedy measures, and should conduct probes in compliance with WTO rules, MOFCOM spokesperson Gao Feng told a meeting in August 2017.

"India should not neglect WTO rules and launch anti-dumping probes based on its own needs," He Weiwen said. "A trade war between China and India is unlikely, but rising bilateral trade frictions would harm both countries," He noted.

Bilateral trade friction between China and India would have a limited negative effect on China but a larger impact on India since India is more dependent on China's products, according to experts.

China has faced many trade frictions in global markets and this situation is partly down to the country's current development phase and its traditional trade model, Zhuang said.

China's exports of labor-intensive products accounted for most of the country's total exports in previous years and this traditional trade model needs to be further improved by the transformation and upgrading of domestic industries, according to Zhuang.

The country is expected to advance capital-intensive and technology-intensive exports in the coming years, she said, adding that China is also expected to increase imports from the international markets, which would help in reducing trade friction.

The first China International Import Expo will be held in Shanghai from November 5 to 10.