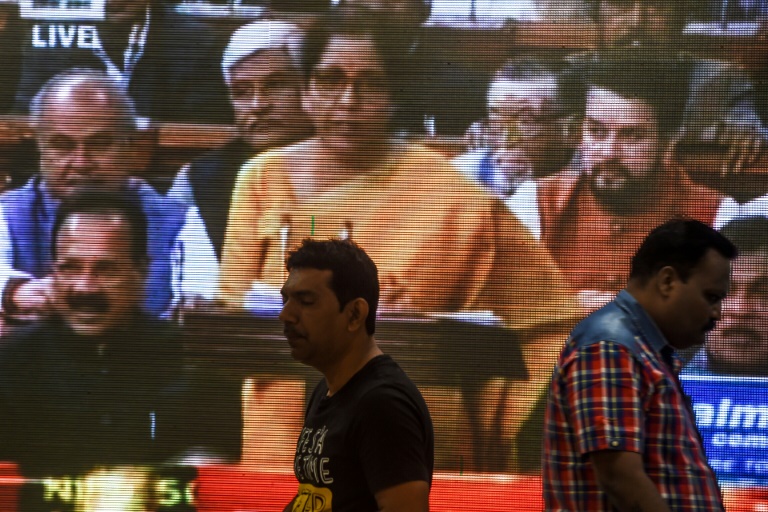 India relaxed its fiscal deficit target Saturday, raising spending and slashing taxes as it seeks to attract foreign investment and increase consumption in the wake of a prolonged economic slowdown.

In a sprawling three-hour speech peppered with references to ancient Indian history and poetry, Sitharaman said the fiscal deficit target for the current financial year was now 3.8 percent of GDP, up from an earlier 3.3 percent.

It will edge down to 3.5 percent next year, she added.

Prime Minister Narendra Modi's right-wing government has been trying desperately to revive the economy, which has flagged for several quarters, with per capita consumption falling for the first time in four decades.

The finance minister said Indians earning under 1.5 million rupees ($21,000) a year could pay lower taxes if they agreed to forego existing exemptions, with a view to raising their purchasing power.

Indian taxpayers are allowed to claim exemptions for a range of expenses, from medical insurance to vacation spending, under a labyrinthine tax regime that Sitharaman has vowed to simplify during her tenure.

She also announced that companies would no longer have to pay dividend distribution tax, terming it a "bold move meant to attract foreign investors".

"Wealth creators will be respected in this country ... and this government assures taxpayers they will not be harassed," she said in her second budget speech since Modi won a landslide re-election last May.

The key agriculture sector will receive a cash infusion of 2.83 trillion rupees to help farmers set up solar power units and storage facilities.

Sitharaman said this would enable farmers, many of whom are burdened by crushing debts, to sell power to energy companies.

She also revealed New Delhi was seeking to shed its 100-percent stake in the country's largest insurer, Life Insurance Corporation, to generate revenue.

Earlier this week, the government also announced plans to sell its 100 percent stake in debt-crippled national carrier Air India after an earlier push to sell part of the airline found no takers.

Experts say India's state-run companies, which manufacture anything from bicycles to condoms, are a major drag on the economy due to their unprofitability, barring the government-owned enterprises in the coal sector.

Prime Minister Modi said the budget would "boost income and investment. It will improve demand and consumption and help improve credit flows".

"It has been created with a focus on the current situation and future requirements of the country," he added.

But analysts and opposition politicians said the budget was too piecemeal and failed to offer a clear roadmap for a possible revival.

"There is nothing dramatic or substantially new in the budget," said Ashutosh Datar, an independent economist from Mumbai.

"Given how constrained its finances are, government did not have fiscal legroom to manoeuvre," he told AFP.

Rahul Gandhi, former leader of the opposition Congress party, told reporters the budget was devoid of "any concrete strategic ideas" to tackle unemployment, which is at a four-decade high.

"It describes the government quite well. Lot of repetition, rambling and all talk but nothing happens. The country is of course suffering and youngsters feel they don't have a future," he said.