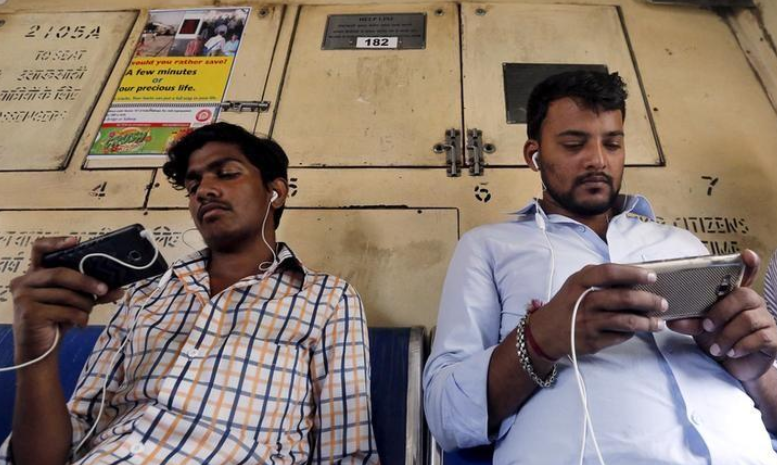 Commuters watch videos on their mobile phones as they travel in a suburban train in Mumbai, India, April 2, 2016 (Photo: Reuters)

“This will be a step in a good direction. This is how full-scale manufacturing happens,” said S.N. Rai, co-founder of Lava, adding the move will gradually also boost local production of components such as smartphone cameras and screens.

The move, if implemented, would be the latest step in Prime Minister Narendra Modi’s phased manufacturing program (PMP), a plan unveiled in 2016 to step up local value addition every year in the smartphone manufacturing space.

About 134 million smartphones were sold in India last year, the world’s second-biggest market after China.

Modi’s government has since raised duties on a range of low-value items such as batteries and chargers and on imported phones.

Any move to impose duties on populated PCBs, however, could risk a backlash from several countries and heighten trade war concerns. China, Canada and the United States among others last week raised concerns at the World Trade Organization around India’s imposition of duties on such devices.

In its annual budget last month, India’s government outlined higher duties on products including imported smartphones and a range of components.

Modi hopes to turn India into a global manufacturing hub in a bid to boost growth and create tens of millions of new jobs.

While his flagship ‘Make in India’ drive is still a long way from delivering on lofty job promises, Modi has had some success with the PMP. Over 100 local factories currently assemble mobile phones and accessories like chargers, batteries, powerbanks and earphones in India, says tech research firm Counterpoint.

The PMP currently envisions local assembly of camera modules and printed circuit boards in the fiscal year beginning April 1, according to a public electronics ministry document.

“India has a plan to raise duties for all components bit by bit,” said Tarun Pathak an associate director with Counterpoint, adding this will gradually force more domestic manufacturing.