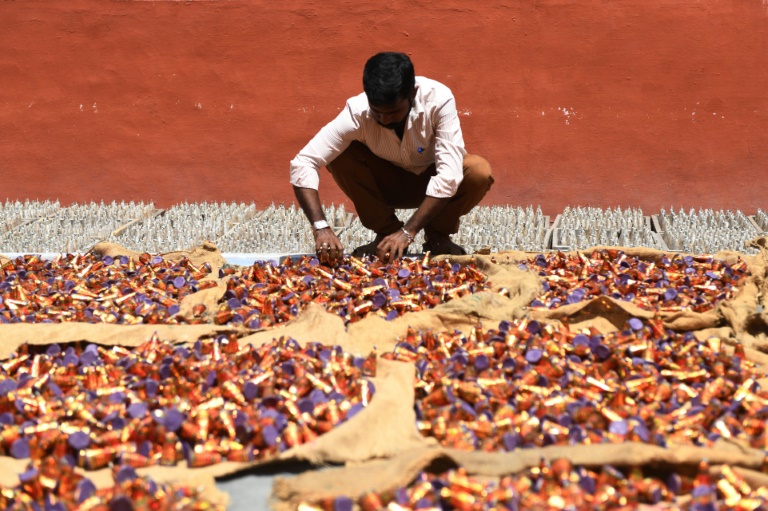 In past years Sivakasi has supplied 90-95 percent of India's firecrackers with revenues of around $800 million. (Photo: AFP)

With thousands of workers painstakingly handmaking vast volumes of firecrackers, Sivakasi in southern India is usually at full tilt before Diwali. But due to efforts to curb air pollution, the pyrotechnics epicentre is fizzling out.

In addition to gifts, elaborate feasts and family get-togethers, the Hindu mega-festival of lights, which falls this weekend, has in recent years also meant setting off firecrackers -- millions of them.

Their smoke combines with other emissions to turn the air of India's cities -- among the world's most polluted -- into a deadly, sickly yellow cocktail that one study says kills a million Indians prematurely every year.

But although the police tried to enforce the new rules, most people set off the old type regardless.

Confusion still surrounds the regulations, but signs in Sivakasi district, which in past years supplied 90-95 percent of India's firecrackers with revenues of around $800 million, suggest the 2019 blowout will be quieter.

"Usually after Diwali the people come to us and place orders for the next Diwali and even give some advance payment," said D Mathan, director of Lima Fireworks -- one of around 1,000 manufacturers in Sivakasi.

"It didn't happen this time around," he told AFP. Production at his company has plunged almost 60 percent.

The industry is the biggest local job creator, directly or indirectly employing hundreds of thousands of people, many of them uneducated women, churning out boxes of crackers with names like "Napoleon Total War".

Now many don't know what they will do.

"Some people migrated to other jobs like daily wage labourers, farm labourers and construction workers," Arvind Kumar, a factory employee in the district in Tamil Nadu state, told AFP.

Many producers switched to manufacturing the "green crackers" after receiving training and assistance from the government. But being more expensive, sales have been slow.

G Karuppasamy, 65, a Sivakasi firecracker shopkeeper and wholesaler, told AFP that sales have slumped almost 50 percent as orders from around India have dried up.

"Authorities talk about pollution but we don't pollute much compared to others. And one day doesn't make a difference for the rest of the year," he said.

"The government shouldn't clamp down on us. Everyone in a 30-kilometre (20-mile) radius is dependent on this sector. Sivakasi's existence isn't possible without this sector," he added.