As largest AIIB stakeholder, Delhi should look beyond geopolitical concerns 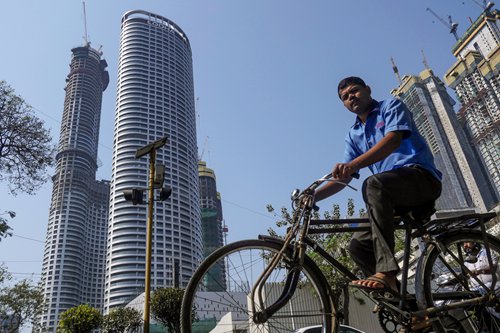 A man rides a bicycle past the construction site of The World Towers, a luxury residential project in Mumbai. (File photo: VCG)

During the opening session of the third annual meeting of AIIB in Mumbai on Tuesday, Indian Prime Minister Narendra Modi said he believes that India and AIIB are both strongly committed to making economic growth more inclusive and sustainable, according to local news site indiatvnews.com.

Modi was quoted as saying that Asia still faces a wide range of disparities in access to education, health care, financial services and formal employment opportunities. Regional multilateral institutions like AIIB can help raise resources, according to the report.

India is now the largest borrower of AIIB, a multilateral development bank (MDB), which is based in Beijing and has been operating since 2016. India has gotten its projects financed to the extent of $4.4 billion since the bank started its operations, which made the country the largest borrower from AIIB, Shri Subhash Chandra Garg, Secretary of Department of Economic Affairs of India, was quoted as saying in a press release published on Sunday.

With a huge population, India is still at an early stage of economic development. And its rapid growth is accompanied by a broadening gap in infrastructure, Wang Yiwei, director of the Institute of International Affairs at Renmin University of China, told the Global Times. "The country has a federal system while its private sector is reluctant to invest in infrastructure projects, which all hinder its infrastructure development," Wang said.

As a result, the South Asian country has high expectations for AIIB to help it bridge this gap, the expert added.

India needs more than $1.5 trillion in investment in the next decade to bridge the infrastructure gap, media reports said in June 2016.

As one of the largest shareholders of AIIB, India has been actively asking for financing from the MDB, which will eventually contribute to its economic sustainability, Zhou Qiangwu, director of the International Economics and Finance Institute, a think tank under China's Ministry of Finance, told the Global Times.

"India, which is also a major country along the routes of the B&R, will upgrade its infrastructure with help from the fund. This move will eventually contribute to connectivity throughout South Asia,"  Zhou said.

Still, India refused to endorse the B&R in spite of warming diplomatic relations between the two countries at the recent Shanghai Cooperation Organisation summit. However, Modi said that connectivity with neighboring countries is India's priority, Press Trust of India reported in June. "We welcome the connectivity projects which are sustainable and efficient and which respect territorial integrity and sovereignty of the countries," the prime minister was quoted as saying in the report.

India's major concerns over the B&R have stemmed from cooperation between China and Pakistan, particularly in the China-Pakistan Economic Corridor, Wang noted. "However, it's not necessary to only focus on certain concepts, but countries should talk more about concrete projects that could yield dividends," he said.

In addition, the B&R consists of multilateral cooperation, which extends beyond infrastructure, Tian Guangqiang, assistant research fellow with the National Institute of International Strategy at the Chinese Academy of Social Sciences, told the Global Times.

"India could boost its trade volume and attract more investment under the B&R, so the South Asian country should abandon its doubts and worries from a geopolitical perspective, although it takes time," he said.

Some experts also forecast that the country, which has ambitious economic plans, will eventually embrace the B&R.

"First above all, it's about confidence-building between China and India to have mutual trust and carry out concrete projects that show tangible benefits," Wang Dehua, head of the Institute for South and Central Asian Studies at the Shanghai Municipal Center for International Studies, told the Global Times.