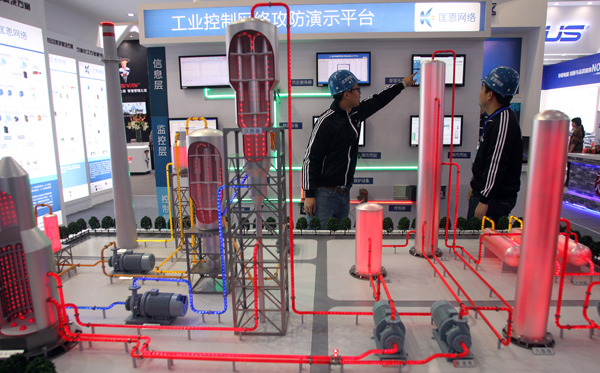 Technicians demonstrate how to deal with cyberattacks during an event in Beijing promoting cybersecurity. [Photo by Zou Hong/China Daily]

China will speed up the implementation of a three-year plan to boost industrial cybersecurity, as the convergence of cutting-edge information technology and industry gathers momentum in the nation.

Chen Yin, chief engineer of the Ministry of Industry and Information Technology, China's top industry regulator, said on Thursday that ensuring cybersecurity should be a high priority as companies are scrambling to promote the development of the industrial internet.

"We will expedite steps to build a nationwide network to track possible attacks on industrial networks, and more efforts will be made to construct an emergency resource pool and an information sharing platform," Chen said at the China Industrial Cyber Security Congress 2018 in Beijing.

Such efforts are part of China's broader push to implement the three-year plan the ministry unveiled in January to build up the nation's capacity to deal with cyberattacks targeting the industrial internet.

Compared with consumer internet applications such as e-commerce, the industrial internet is far more complex and more vulnerable to sophisticated cyberattacks. Once such a network is attacked, it not only compromises personal information, but also harms the whole enterprise, and even brings catastrophic results to a whole industrial chain, said Yin Libo, director of the China Industrial Control Systems Cyber Emergency Response Team.

The industrial internet is a network that combines advanced machines with internet-connected sensors and big-data analytics. It is designed to boost productivity, efficiency and the reliability of industrial production.

According to Yin, large-scale industrial cyberattacks occur frequently. Since 2015, nearly 300 such attacks occur globally every year. Industry has become the "hardest hit area".

As of 2017, more than 100,000 units of industrial control systems and devices are connected to the internet globally, marking 42.9 percent year-on-year growth. China is ranked fifth in the world in that regard, she added.

Qi Xiangdong, chairman of 360 Enterprise Security, said the traditional firewall-type security defense system is outdated, and a new cybersecurity system is growing. The new system will be driven by data analysis, threat intelligence and cybersecurity talent," he added.