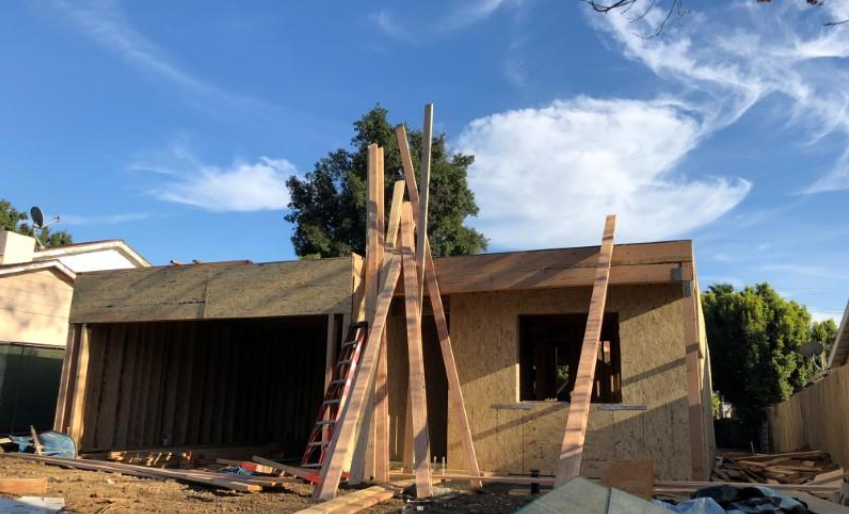 A new home under construction is seen in Los Angeles, California, US February 2, 2018 (Photo: Reuters)

US industrial production increased solidly in April amid an acceleration in manufacturing and mining output, the latest indication that the economy was gathering momentum early in the second quarter.

The upbeat report from the Federal Reserve on Wednesday came on the heels of data on Tuesday showing a pickup in consumer spending in April. But a sharp drop in homebuilding and permits last month put a wrinkle on the brightening economic picture.

The industrial sector is being supported by strengthening domestic and global economy, a still-weak US dollar and tax cuts. But there are concerns that trade tensions between the United States and China could slow momentum.

“Risks continue to hover over our industrial outlook, mainly related to trade policy,” said Gregory Daco, chief US economist at Oxford Economics in New York. “China-US trade tensions are slowly rising while strains between the US and Europe are becoming more visible following the Trump administration’s decision to back out of the Iran nuclear deal.”

A survey early this month showed trade policy as the top concern for manufacturers, with varies industries complaining that the Trump administration’s tariffs on steel and aluminum imports had pushed up commodity prices.

Some manufacturers reported that “business planning is at a standstill” as a result of the tariffs.

Industrial capacity utilization, a measure of how fully firms are using their resources, increased 0.4 percentage point to 78.0 percent, its highest reading since March 2015. It remains 1.8 percentage points below its long-run average.

Officials at the Fed tend to look at utilization measures as a signal of how much slack remains in the economy — how far growth has room to run before it becomes inflationary.

Strong industrial output and a pickup in consumer spending support expectations of second-quarter growth around a 3 percent annualized rate. That should allow the Fed to raise interest rates next month.

The US central bank increased borrowing costs in March and forecast at least two more rate hikes for this year. The economy grew at a 2.3 percent pace in the first quarter.

The dollar rallied to a five-month high against a basket of currencies while prices for US Treasuries fell. Stocks on Wall Street were trading marginally higher.

Building permits fell 1.8 percent to a rate of 1.352 million units last month. Starts fell in the Northeast, West and Midwest, but rose in the South.

Last month’s gain in single-family starts was outpaced by an 11.3 percent decline in groundbreaking activity on multi-family housing units. Residential construction has been hamstrung by rising prices for building materials and shortages of land and skilled workers.

While a survey on Tuesday showed confidence among single-family homebuilders perked up in May, builders complained that “the record-high cost of lumber is hurting builders’ bottom lines and making it more difficult to produce competitively priced houses for newcomers to the market.”

The Trump administration in April last year imposed anti-subsidy duties on imports of Canadian softwood lumber. These constraints have left builders unable to plug an acute shortage of houses on the market, restraining home sales growth.

“The industry is still under capacity constraints and suffers from not being able to hire as many workers as it would like,” said Andres Carbacho-Burgos, a senior economist at Moody’s Analytics in West Chester, Pennsylvania.

“In the next two years, residential construction will also pull back slightly once the Fed finishes increasing short-term rates ... reducing the amount of credit going to real estate development.”