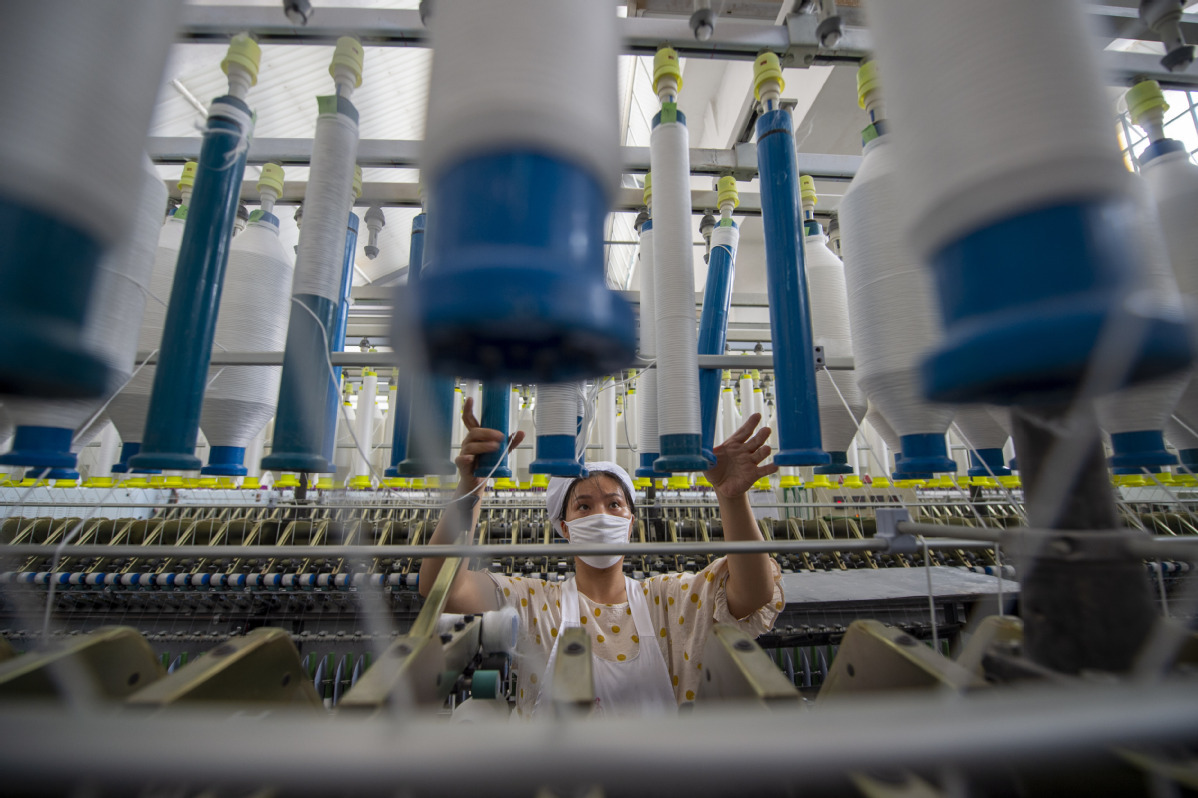 Officials and experts said they are seeing further recovery in the Chinese economy with the strengthening of supportive fiscal and monetary policies in the second half of this year.

Profits of China's major industrial enterprises rose by 11.5 percent year-on-year in June, up from 6 percent in May, the National Bureau of Statistics said on Monday.

Industrial profit growth accelerated last month to－12.8 percent year-on-year in the first six months. That was an improvement compared with-19.3 percent from January to May.

This upward trend was driven by increases in industrial output, which rose to 4.8 percent year-on-year in June from 4.4 percent in May, analysts at Nomura Securities said in a note on Monday.

Another factor was a rebound in the producer price index, which fell 3 percent year-on-year in June, compared with a 3.7 percent decline in May, the analysts said.

NBS senior statistician Zhu Hong said the acceleration of industrial profit growth was mainly driven by four factors: faster growth in industrial production and sales, narrowing of the decline in prices for industrial products, lowering of the cost per 100 yuan ($14.30) of operating revenue posted by major industrial enterprises, and significant improvement in profits of key industries including iron and steel, oil and gas drilling and nonferrous metals.

Although the situation for China's industrial profits improved in the second quarter, market demand is still weak and companies still face hardships in production and operations due to the effects of the novel coronavirus, Zhu said.

"Currently, the pandemic is continuing its spread across the world. Given the complicated and severe international economic and trade situation, whether China's industrial profit growth will continue still remains uncertain," Zhu said.

"The government will endeavor to implement various policies supporting companies to stabilize economic fundamentals and keep consolidating the rebound and upward trend of the industrial economy."

The World Bank published a special report on Monday on China's successful experience in improving the business environment.

Over the past two years, China has moved from the 78th place in the World Bank's "doing business" ranking of 2018 to 31st in the 2020 ranking, the report said.

China was included in the Top 10 fastest global reformers for two years in a row. Key drivers behind the performance included robust private sector participation and strong enforcement of the reform agenda, according to the World Bank.

The Ministry of Finance said on Monday it will continue to implement reform measures to improve the business environment, which is a key element in stabilizing economic growth and industrial production and supporting the corporate sector.

Liu Ligang, managing director and chief China economist at Citigroup, forecast that China's gross domestic product will grow by 5.9 percent year-on-year in the second half. The stepping up of its fiscal policy in the second half will further promote economic recovery, he said.

Major economic indicators suggest that the recovery of production in China was much faster than that of demand in the first half, he said. The growth of value-added industrial output was 4.8 percent year-on-year in June, which was close to the growth rate in the previous few years.

"We are seeing further recovery in the Chinese economy, but the process is still uneven. The recovery of production and infrastructure investment is much quicker than that of consumption and capital expenditures. Therefore, it is necessary to implement an accommodative monetary policy," Liu said.

He estimated that China will lower the one-year medium-term lending facility rate by 20 basis points in the third quarter and cut the reserve requirement ratio twice in the second half by 50 basis points each time.

"We expect GDP growth to rebound to 5.5 to 6 percent year-on-year in the second half, as domestic consumption recovers to positive growth territory and property and infrastructure investment remain strong," Wang said in a report.