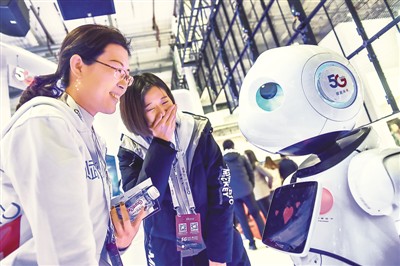 In their position of replacing human beings in simple and repetitive tasks on production lines, industrial robots have created enormous new opportunities for employment in China, according to two reports recently released by China’s Ministry of Human Resources and Social Security (MHRSS).

“Industrial robots involve advanced technologies that have not been mastered by a lot people in many companies, thus prosper from great popularity in technology fields. Jobs in relevant fields of industrial robots give people a sense of achievement, plus the salary is very good,” said Guo Biao, a senior engineer in industrial robots.

Rapid development of industrial robots industry in China brings about emerging demand for talents. According to a recent MHRSS report, in recent years, domestic companies and scientific research institutes have sped up efforts to attract and cultivate talents for technological research.

Such efforts have helped realize significant improvement in the hardware foundation and technological level of institutes and companies, which, however, still haven’t made enough efforts to cultivate applied talents, said the report. This suggests that there will be a growing demand for engineers who have mastered such techniques as operation, maintenance, debugging, troubleshooting, and system integration of industrial robots.

By 2020, the talent gap of relevant fields will reach 3 million, predicted a document jointly released by China’s Ministry of Education, MHRSS, and Ministry of Industry and Information Technology.

The MHRSS and the State Administration for Market Regulation of China has jointly announced 13 new occupations this year, with industrial robot operator and operation and maintenance personnel of industrial robot system included.

The recent report on the career prospects of the two occupations released by the MHRSS predicted that the demand for talents for both occupations will reach around 1.25 million in the next five years.

Great market demand for technological talents in the industry has resulted in profound increase in the salaries of practitioners in industrial robot industry, with technical operators in the industry now enjoying monthly pay ranging from 5,500 (about $781.43) to 7,000 yuan, while that of maintenance engineers is usually between 7,000 and 10,000 yuan and system integration engineers more than 20,000 yuan.