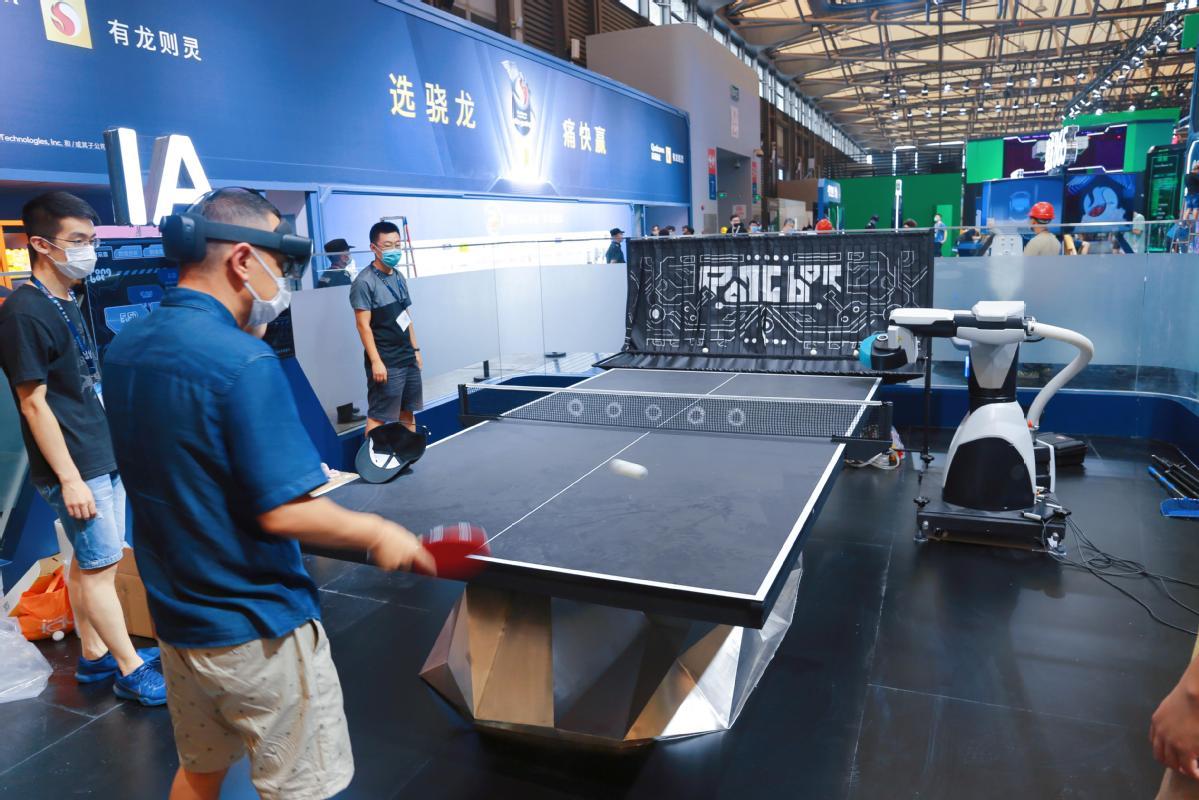 A visitor wearing VR equipment plays table tennis with an AI-enabled robot during an expo in Shanghai. (Photo: China Daily)

Chinese athletes are getting a helping hand from artificial intelligence in their efforts to prepare for the Olympic Winter Games Beijing 2022.

AI is being used in a visual scoring system to help them train for freestyle skiing aerials.

This is a systematic commercial application of AI in the fields of global competitive sports, which is of great significance, said Li Di, CEO of Xiaoice, an AI pioneer that has been spun off from US technology giant Microsoft.

Xiaoice has recently won a bid from China's sports administration to design the visual scoring system.

Based on the unique characteristics of freestyle skiing aerials, Xiaoice is developing an original AI-powered skiing analysis model to help athletes improve training efficiency, and to achieve scientific training.

"AI has a huge potential in the sports sector. Unlike AlphaGo, an AI machine that defeated human beings in the ancient Chinese game of Go, we believe AI has the potential and capability to be a collaborator with human beings," Li said.

The case of using AI in freestyle skiing aerials training offers a peek into how cutting-edge technologies can help overhaul the sports sector.

From improving fans' viewing experience of sports events, boosting training efficiency of athletes, to being virtual umpires and assistant coaches, AI has the potential to inject new vitality into the entire chains of sports, experts and industry participants said.

A research report from accountancy firm PwC shows that AI has a role to play in talent identification and selection, pre-game preparation, in-game activity, post-game analysis, improving media and experience as well as boosting management and operations of sports institutions.

"AI technologies are evolving fast and growing increasingly critical for a sporting organization's ability to win games, improve coaches and players, manage their operations, and grow, serve, and retain their fans," PwC said in the report.

Li from Xiaoice agreed, saying that data and quantitative analysis have been used in games for a long time, but AI is considerably elevating every aspect of sport to a new level.

"Sports is a huge market for the application of AI, which has multiple perspectives to look at. First of all, coupled with wearable sensors and high-speed cameras, AI can really assist athletes to become faster, higher, and stronger through more scientific training," Li said.

"The potential for using AI as virtual umpires in competitions is also huge. Meanwhile, sports is also a culture and AI can further increase the popularity of that culture."

Sensing the huge opportunities, China has highlighted that more efforts will be made to accelerate the integration of the internet, big data and AI into the sports industry in a 2019 plan to build a powerful sports country.

The State Council, China's Cabinet, also issued a guideline in September 2019 for wider application of emerging technologies such as smart manufacturing, big data, and AI in the field of sports manufacturing, and support the development of smart sports events related to snow sports, football, basketball, and motor racing.

Chinese companies, universities and sports associations are scrambling to answer the call. In November, the Shanghai University of Sport, for instance, inked a partnership agreement with the United States chip heavyweight Qualcomm and Pong-bot, a Shanghai-based developer of robots, to empower the development of smart sports with technologies like 5G and AI.

The school said the collaboration aims to exploit the full potential of 5G and AI technologies in the application of sports training, sports education and mass fitness, with each partner contributing its advantages and resources.

Chen Peijie, president of the Shanghai University of Sport, said that the use of novel technologies in sports will help improve the quality and effectiveness of sports development and promote deepened integration of mass fitness and mass health.

"We aim to allow technology-driven sports activities to be applied in diverse scenarios so that more people can enjoy the fruits from the integration of sport and technology," he said.

The China Ping-pong College at the Shanghai University of Sport has since 2015 collaborated with Pong-bot to conduct technological research and development to apply ping-pong sport in more application scenes, and multiple intelligent ping-pong robots have been developed.

At the third China International Import Expo held in Shanghai in November, a ping-pong robot training system－one of the achievements of the R&D collaboration, involving a robot that serves the ball using a vision system and intelligent training－was exhibited.

The school said national-level coaches were involved in the design of the training models, which cover those for both beginners and professional athletes.

"With the assistance of such robots, the learning efficiency of students of ping-pong will be improved significantly," the school said.

As part of the agreement, WSC Sports will also provide Tencent Sports (and other Tencent divisions) with its automatic video solutions for content distribution through Tencent's digital platforms, such as its website, apps and social media channels－all of which combine to boast over 100 million users and subscribers.

"China boasts one of the most robust sports fan bases in the world, with interest across multiple sports and leagues worldwide," said WSC Sports co-founder and chief business development officer, Aviv Arnon.

"This partnership is aimed at growing that fandom by providing Chinese sports fans with personalized and innovative experiences and exposing them to a large variety of content with which they can engage."

Migu Co Ltd, a subsidiary of telecom operator China Mobile, is also partnering with the Chinese Basketball Association to jointly build a 5G laboratory and explore how to leverage the superfast wireless technology to empower sports.

The move is part of a broader strategic deal the two sides inked to deepen their partnership and bring China's professional basketball games into the 5G era.

Migu said the two sides are working together to bring immersive watching experiences to basketball enthusiasts using 5G technology. Under the deal, Migu also becomes strategic digital media partner of the CBA for the next five years.

But, amid the increasing use of technologies in sports, efforts are also needed to ponder ethical aspects of using AI in sports.

A PwC report said: "If a specific sporting team employed the best engineers to build powerful AI applications to direct strategic and tactical real-time in-game decisions to support coaches and players, what does this actually mean to the sport and its participants as a whole?

"Will players and coaches get better or worse; or is their job, role and value just different? Will the sport become sterile or boring because it's played in the most efficient and effective way, or will new exciting game play be introduced to combat this effective game play?

"Boards of sporting codes and teams need to have the appropriate governance arrangements in place to manage the introduction and use of AI into their industry, including strict compliance with any guidance set by the governing bodies to ensure and maintain fair competition amongst teams."