By ZHENG YIRAN in Beijing and PEI PEI in Shenzhen, Guangdong | China Daily 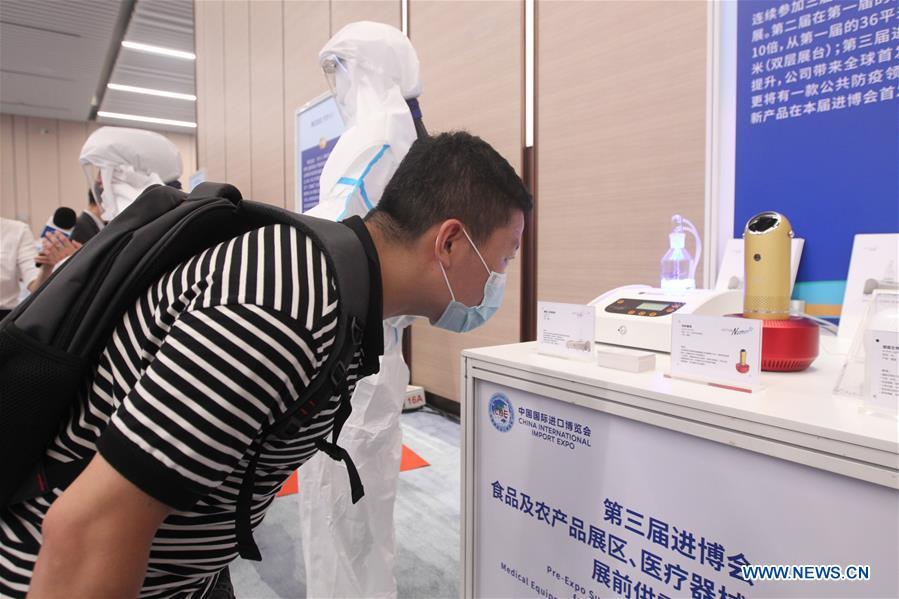 A visitor looks at exhibits during a supply-demand matchmaking meeting ahead of the 3rd China International Import Expo (CIIE) in Shanghai, East China, on July 26, 2020. (Photo: Xinhua)

China is stepping up efforts in innovation breakthroughs in the medical devices sector in a bid to enhance the independence and controllability of industrial and supply chains.

The goals were released in a statement after the country's Central Economic Work Conference concluded in December, highlighting that China will make efforts to build more independent and controllable industrial and supply chains.

The security and stability of industrial and supply chains is the foundation of forming a new development paradigm, the statement said.

Efforts should be made to achieve breakthroughs in key and core technologies, break bottlenecks at the earliest time possible and obtain more exclusive technical advantages, it said.

On Jan 6, the National Innovation Center for Advanced Medical Devices in Shenzhen, Guangdong province, officially launched operations. Approved by the Ministry of Industry and Information Technology eight months ago, the facility is the country's first national-level innovation center in the medical equipment sector. By effectively integrating innovative resources from leading enterprises, research institutes and industry associations, the center is expected to serve the entire industry and important application areas, and create an open global platform for innovation, entrepreneurship and industrial integration.

The Shenzhen Municipal Industrial and Information Technology Bureau said there are now around 900 manufacturing enterprises engaged in the medical equipment sector in the city. Nearly 20,000 patents have been approved to use the products, among which more than 4,000 involve invention patents. Between 2010 and 2018, the compound annual growth rate of the production value of the industry reached 12.43 percent.

Zheng Hairong, the center's director, said the facility will adopt a dynamic market-oriented mechanism, gathering leading enterprises in the medical devices sector, such as Mindray and United Imaging. Through technological innovation, the center is expected to fill the gap between academia and industry, realizing its leading role in solving sector bottlenecks.

The problem of bottlenecks in the country's medical devices sector was specifically demonstrated during the COVID-19 pandemic, especially regarding high-end medical equipment. For example, since March, although global demand for Chinese ventilators skyrocketed, core components related to ventilator manufacturing, including turbo fans, sensors and chips, mainly relied on imports.

According to the General Administration of Customs, in the first half of 2020, Chinese medical devices exports surged 22.5 percent year-on-year to $16.3 billion, while such imports stood at $10.3 billion, down 17.7 percent on a yearly basis.

To enhance the independence and manageability of industrial and supply chains in the medical devices sector, industry experts suggested that reforms be constantly carried out to build an innovation-friendly environment. Core components imports should be expanded and storage preparations should be made.