China’s remarkable progress in rice technology is driven by innovation, it being only one part of a broader picture of success. 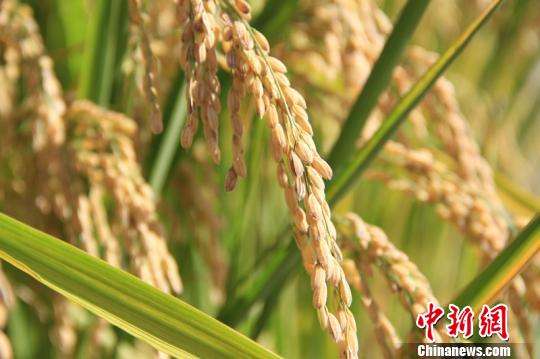 Renowned Chinese agricultural scientist Yuan Longping and his research team's experiment of planting saltwater-tolerant rice in desert areas of Dubai proved to be a success, with one type of rice yielding more than 7.5 tons per hectare.

It was the world's first successful case of planting rice in a tropical desert area. According to the cooperation plan, the rice is scheduled to cover more than 10 percent of the United Arab Emirates. The rice will not only raise the country’s capability to feed itself, but will also improve the local environment.

The Chinese rice technology was widely applauded by media in both the Middle East and around the world.

The “Chinese rice miracle” has become a global phenomenon. Last year, China’s two-meter high “giant rice” made headlines in many media outlets. Hybrid rice, which is a global record holder in terms of its yield per hectare, also amazed the world.

“Who will feed the world in the 21st century?” a US researcher with the Worldwatch Institute asked 22 years ago. The answer to that question seems very obvious now.

China is not only increasing rice yields steadily, but is also making breakthroughs in agricultural technologies. Take hybrid rice as an example, the rice has not only fed 70 million people in China, but has also been introduced in India, Vietnam and the Philippines among other countries and regions, now being grown on a large scale.

Last year, the yield of sea rice per hectare reached 415 kilograms in China. It’s estimated that if sea rice is planted on around six million hectares of land, its yield of 30 billion kilograms of rice per mu (0.07 hectare) could feed 80 million people.

For instance, in Dubai, Chinese technologies enable the water and fertilizers to automatically reach the roots of rice plants while the unabsorbed water fertilizers that seep out of the soil will be directed for recycling. The smart irrigation system can control the amount of water and fertilizer based on the demand of soil conditions and other factors.

Technological innovation has made impossibilities become possible one by one.

China’s progress and development has surprised the world in a good way, with the little rice seed as just one example. Other cases include the launch of Huiyan, or Insight, China's first space satellite, the takeoff of the large homegrown passenger plane C919, the successful development of the quantum computer and the sea trials of China’s first homemade aircraft carrier.

From running after other countries to finding itself ahead in the race, China has changed its role in developing edge-cutting technologies. Emerging technology could make China the world’s next innovation superpower, The Hill of the US said.

The essence of innovation-driven development is talent. Chinese scientists, including Qian Xuesen, Deng Jiaxian, Yuan Longping and Tu Youyou, have made great contributions to not only China but also the world, and used positive energy to improve the well-being of mankind.