CLEVELAND, the United States, Oct. 4 (Xinhua) -- The US administration under President Donald Trump might have reason to believe it could lessen international competition for American manufacturers by using a whole arsenal of import tariffs. 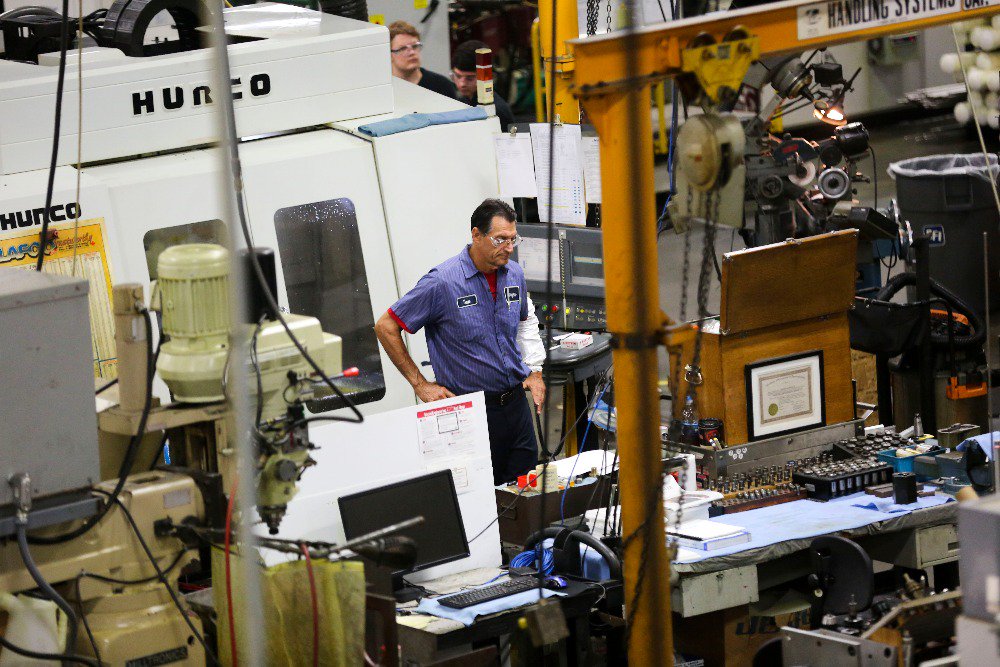 Staff members work at the workshop of Jergens Inc., a machining manufacturer in Cleveland, Ohio, the United States, on Aug. 22, 2018. (Photos: Xinhua)

However, the success of the 76-year-old Jergens Inc., a machining manufacturer in Cleveland, Ohio, tells a different story.

It is the product and service innovation, workforce development and pursuit of new market that have helped the fourth generation family business stay "alive and well" in a highly competitive global market, said Jack Schron Jr., president and CEO of Jergens Inc., in a recent interview with Xinhua. 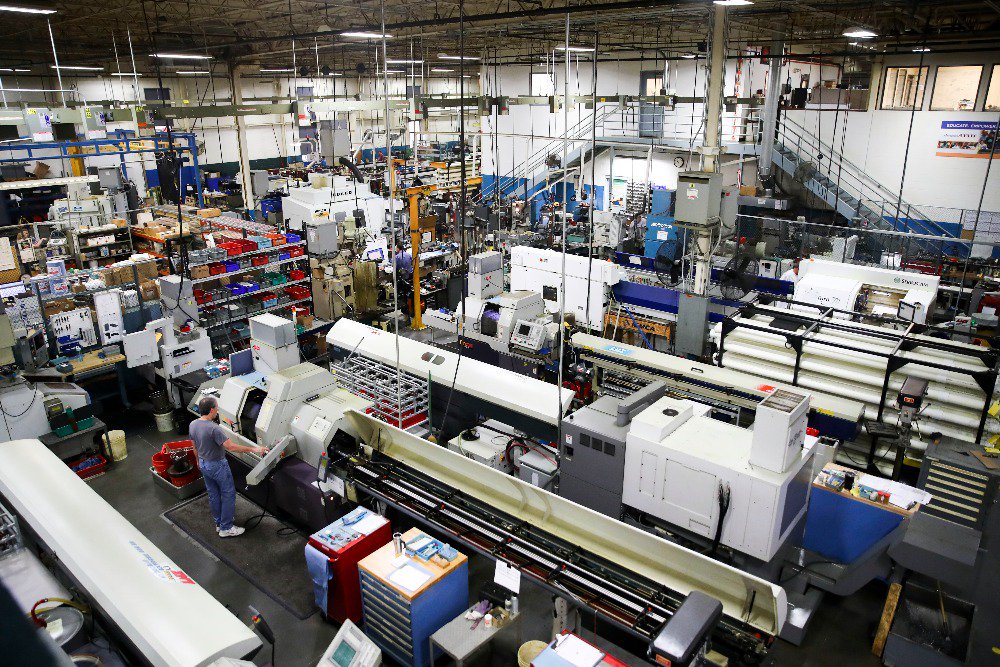 Staff members work at the workshop of Jergens Inc., a machining manufacturer in Cleveland, Ohio, the United States, on Aug. 22, 2018.

Built on a 47-acre (about 190,000 square meters) site, Jergens Inc. opened its doors in 1942. Now it is one of the world's largest manufacturers of standard tooling components, vises and other workholding equipment.

Though it remains a traditional manufacturer in many ways, the company which owns about 400 employees and three divisions has been leveraging changing technologies to solidify its competitive advantage.

Jergens started using a digital information back in the early eighties and put all its products onto an electronic Computer Aided Design (CAD) database, initially stored in big reels of tape, then to small micro-based desktop.

Since last September, it has put more than 6,500 workholding products on MachiningCloud, a product data provider for cutting tools, Computer Numerical Control machines and workholding.

With the convenience of cloud-based technology, Jergens' customers can get instant access to 3D CAD models for the company's line of workholding products without having to search through catalogs.

To stay ahead of the competition, manufacturers need to be flexible, think creatively, embrace changing technologies and reinvent itself for the future, Schron noted.

For about 30 years, Jergens has bought and resold computerized electronic screwdrivers made in Japan. The high-tech device makes sure the right pressure is applied in assembling items.

"About seven or eight years ago, we started to manufacture our own precision electronic screwdrivers, that would be the next generation beyond the Japanese products that we're bringing here," Schron said, adding Jergens-made screwdrivers are sold worldwide at prices that range from 7,000 to 25,000 US dollars.

The company also reinvented its ways to sell the products.

"We provide vending machines for our individual customers. In the vending machines will be the drill, the safety gloves, safety glasses, things of that nature that are routinely consumed in the manufacturing process," Schron said.

With the Internet controlled machines, Jergens knows when to send out a truck to stock supplies. 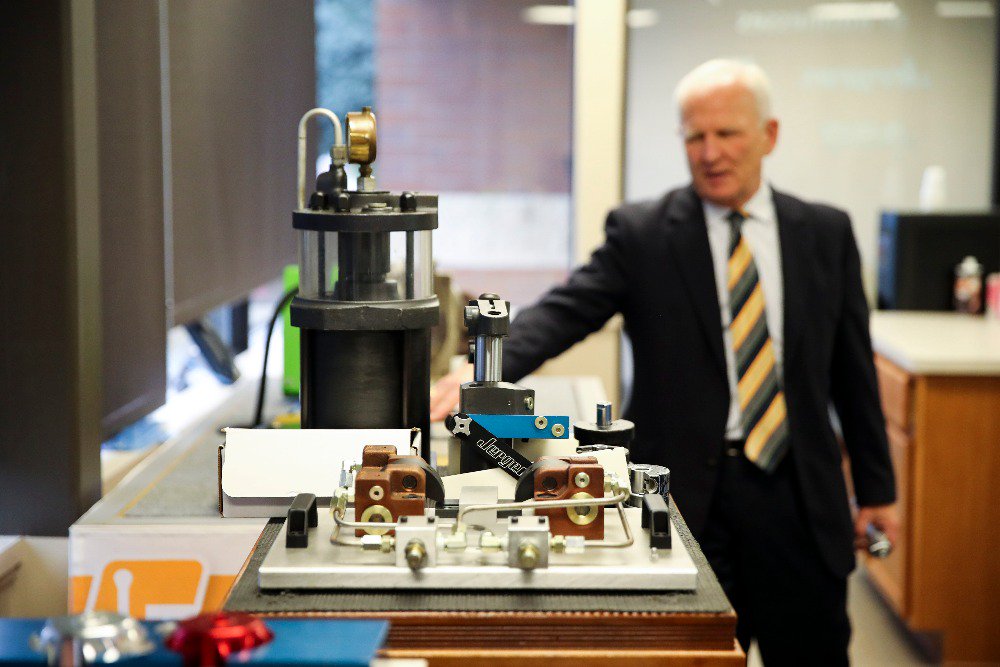 Products are seen at a showroom of Jergens Inc., a machining manufacturer in Cleveland, Ohio, the United States, on Aug. 22, 2018.

An attorney by profession, Schron has been involved in Jergens' manufacturing operations since 1978. He believes it is important to introduce the next generation to manufacturing, a major sector of Ohio's and national economy.

"Our television tells us that it's a dying industry and as result, don't send your children into the manufacturing side, see it dying," Schron lamented.

Schron, who disagrees with the opinion, is the co-founder of the company's online courses called "Tooling University," saying today's manufacturers need the right people, the right knowledge to survive and flourish.

The program offers over 800 online training classes for metal manufacturers, welders, assemblers and maintenance professionals, as well as customization tools, content-development services and multi-language support, according to Schron.

The United States lost about 5.5 million manufacturing jobs in 2000-2017, according to a study from the University of Chicago (UC).

The job losses were highly concentrated among lower-skilled positions and the manufacturing sector is hiring more highly skilled workers, said Erik Hurst, professor of economics at the UC Booth School of Business and co-author of the report.

"We have experimental programs where we are constantly exposing young people to why you should come into the education, be educated, why you should be in manufacturing," Schron said.

The average age of a Jergens' employee is "maybe 33, 34 years old," he said. "That's pretty good. We're pushing very hard to try and get a younger workforce, but it's not easy." 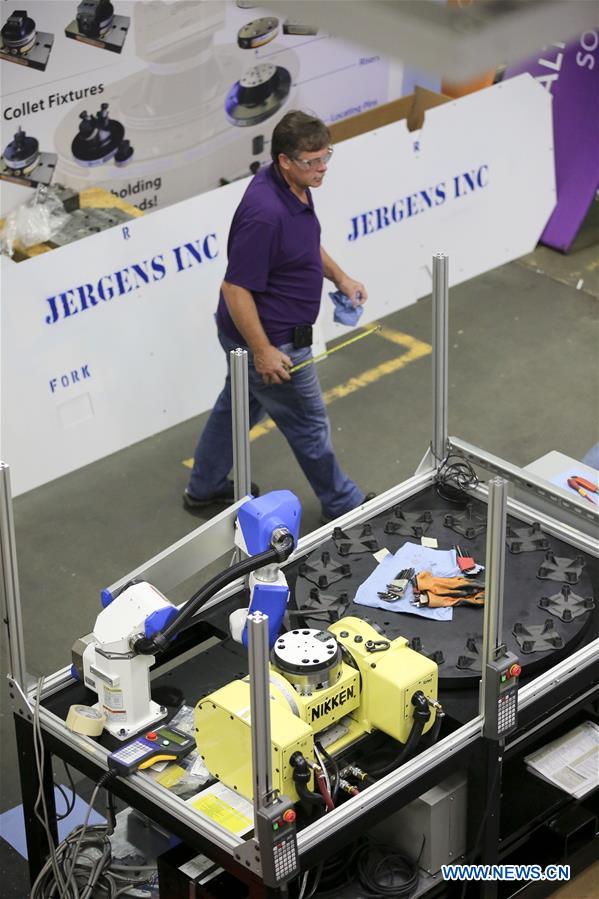 A robot hand working at the workshop of Jergens Inc., a machining manufacturer in Cleveland, Ohio, the United States, on Aug. 22, 2018.

Jergens has not felt the problems from the tariff battles between the United States and its trading partners including China, Schron said, because most of its products, most of the steel and aluminum it uses, are locally produced.

However, like other US manufacturers, Schron is worried about more tariffs and rising prices, contributing to feelings of uncertainty as the tit-for-tat tariffs between Washington and Beijing keep escalating.

"There's always concern about (tariffs)," he said. "Trading is trading...The economic reality should not be dragged by (neither country's) political reality."

The changes China has undergone in the past decades are "amazing", he said, noting that each time he visited Beijing he found something new popped up in the streets around the hotel he used to stay.

"That means the market is for you too. That's why we started with one employee, we now have about 20 (in China)," Schron said.

The new facility of Jergens Shanghai Commercial Company Ltd. is located in a new economic development technology park in the Jinqiao District in PuDong, Shanghai, China.

"Even though we have physically had an office there for over 12 years, we've been actually selling product there for probably 15 to 20 years," he said.

Schron is making his plan to attend China International Machine Tool Show, one of the largest and most influential machine tool shows in the world, in Beijing next April.

"What's the future plan for (our) Chinese presence? I know they'll grow, grow, grow!" he chuckled.