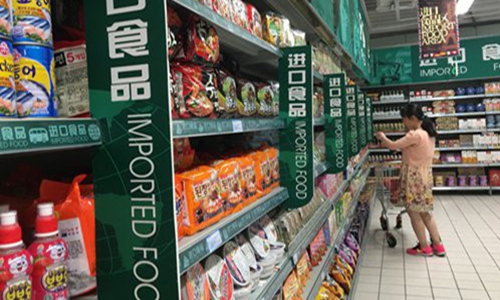 As more Chinese people are staying home and avoiding outdoor activities amid the coronavirus outbreak, sales of fast foods such as instant noodles - whose sales plunged in a trend of consumption upgrading - have peaked in recent days, with more people sharing cooking videos on social media platforms.

On JDDJ, an online-to-offline retail and delivery platform, sales of instant noodles have jumped 740 percent year-on-year since January 24 . A spokesperson for the company told the Global Times on Thursday that beef, pork, seafood and vegetable flavors are popular among consumers.

Supermarket chain Walmart told the Global Times that demand for instant noodles has "skyrocketed" in recent days, without providing detailed figures. A spokesperson for Suning said instant noodles had become one of "the most popular items" on its online stores during the Spring Festival holidays.

"If you come earlier in the morning, there are stockpiles," said the employee.

The Global Times observed that some consumers attempting to buy instant noodles had failed and instead turned to other fast foods like quick-frozen dumplings and self-heating hotpot.

Sales of instant noodles are so hot that some popular brands are running out of stock in certain regions. A white-collar worker surnamed Li from Nanjing, capital of East China's Jiangsu Province, said she looks to buy a certain type of spicy instant noodle on Tmall supermarket, but the noodles have been sold out.

"Our company allows employees to work at home due to the onslaught of the coronavirus. I don't want to order food due to concerns over infection, but my time for cooking is very limited. Cooking instant noodles, which saves time, is a best option," Li told the Global Times on Thursday.

Li cooks instant noodles with other ingredients like eggs and meat to make them more tasty.

On Chinese short-video platform Douyin, cooking lessons for instant noodles have been circulating. One video teaching people how to stir fry the noodles had received 1.15 million likes as of press time.