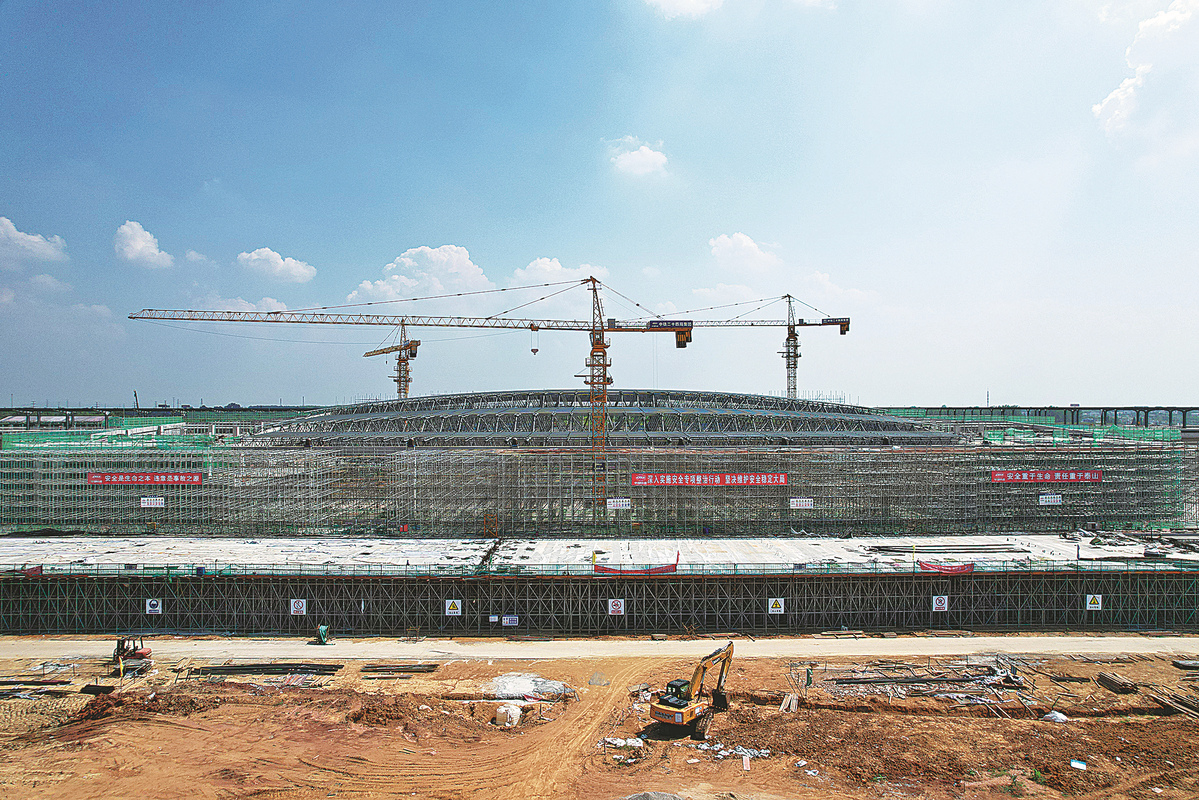 Construction of an intercity railway project along the river in southern Jiangsu province sees a leap forward as the main building of Jurong Station, a major station along the rail and a future transportation hub for the county-level city, is nearing completion with a "breakthrough" achieved in capping work recently, the project builder said.

China Railway 24th Bureau Group Corp Ltd (CR24), a unit of State-owned China Railway Construction Corp, said its team completed cap installation for Jurong Station on Friday and started the interior decorating work, readying the station for the official operation of the intercity railway along the Yangtze River within this year.

"Lifting a 380-metric-ton framework 10.8 meters high, moving it inch-by-inch to its destination and then settling it on the main building of a railway station covering 14.9 square kilometers… We knew at the beginning that the capping work would be difficult, but the real construction turned out to be harder," said Qiu Fuxiang, a project manager with CR24.

Leveraging the BIM (building information modeling) simulation before launching on-site construction, Qiu's team, together with experts from Southeast University and building institutes in Jiangsu's Zhenjiang city where Jurong is located, managed to lift and "help the station wear" its "giant steel hat "with 12 hydraulic jacking machines placing the cap framework in the planned position, the manager said.

"To build the cap framework in one go is tough, but worth all the effort as the work not only marks a milestone in construction of Jurong Station, but it will also lay a solid foundation for the future expansion project," Qiu said, adding that preparation of the combined construction work of a new station which has two platforms and will be linked by six other rails nearby with the Jurong Station, is also underway.

According to the State-owned builder, Jurong is among a batch of areas benefiting from the intercity railway, which will bring one-hour intercity trips to more passengers living in the Yangtze River Delta region.

With a designed speed of 350 kilometers per hour, the 278 km intercity line is a major part of China's riverside railway construction plan, and is the second intercity line between Shanghai and Nanjing, Jiangsu province. After completion, the railway will enhance connectivity in the delta region by facilitating trips between Nanjing, Zhenjiang, Changzhou, Wuxi, Suzhou in Jiangsu province and Shanghai.

The National Bureau of Statistics said investment in the infrastructure sector rose 7.1 percent year-on-year in the first half, reflecting the nation's resolve described in the 14th Five-Year Plan (2021-25) to upgrade its infrastructure nationwide, despite disruptions by external uncertainties and COVID-19 resurgences.

Local governments in the same period have issued 3.41 trillion yuan ($504.8 billion) worth of new special bonds, which offer support to over 23,800 projects, 13,000 of them being newly launched, the Ministry of Finance said. The nation saw the beginning of construction on nearly 170 new highways and national and provincial road projects, with total investment reaching 291 billion yuan.