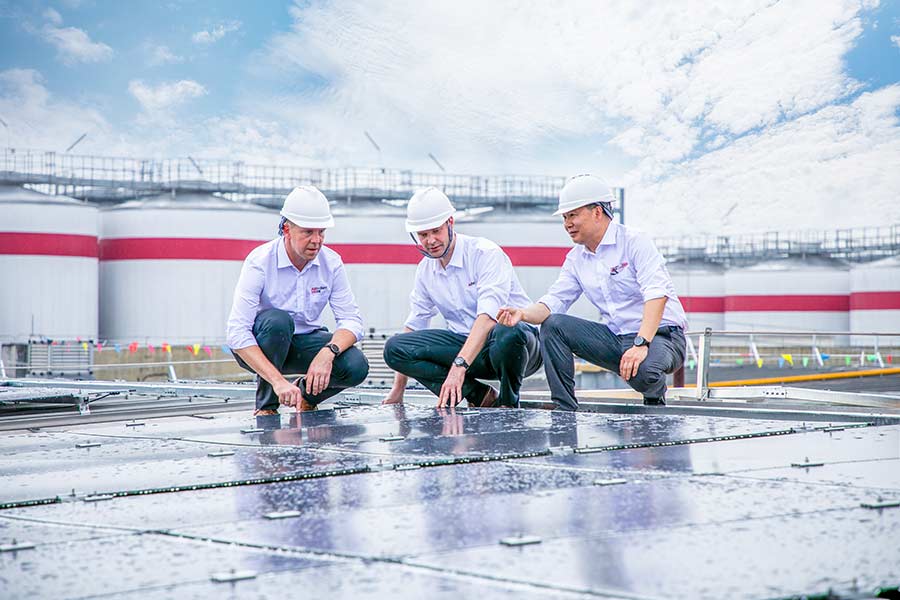 Anheuser-Busch (AB) InBev, the world's largest brewer by production volume, will add more premium brands and install solar panels in nine of its Chinese breweries by the end of this year.

In addition to creating diversified product and brand portfolios in China – the company's second-largest market after the United States – AB InBev plans to further develop a premium segment in China, which currently accounts for less than one percent of the country's beer market.

Jan Craps, CEO and president for AB InBev's Asia-Pacific region, said the company has identified premium products as an important growing trend across most consumer goods in China.

Compared with wine and spirits, he said premium beer is still in its early stages of growth in China.

"We will continue to enrich China's consumption upgrading with a big focus on building new capabilities that are key for sustainable market performance over the long run, such as investing in new beer styles, smart and green factories, e-commerce, digital marketing and analytics," he said.

The Belgium-headquartered brewer has invested more than $3 billion in China since 1995.

The company expects its Foshan brewery, sitting in a strategic location in the Guangdong-Hong Kong-Macao Greater Bay Area, to embrace grid-connection at the end of June and generate about 5 million kilowatt hours of electricity on an annual basis from 2019.

As AB InBev's biggest Budweiser brewing and bottling facility in the world, the Foshan brewery in Guangdong province delivers 20 percent of its global production volume.

AB InBev has teamed up with the United Nations Environment Programme in Foshan to advance the 2025 Sustainability Goals in China.

With China the host country, the 48th World Environment Day on June 5 had a Chinese slogan that said "Take action to save the blue sky".

Regarding the company's plan to upgrade power supply systems in nine of its Chinese breweries by the end of this year, Craps said that the breweries' solar panels cover a combined floor area of 410,000 square meters, equal to the size of 57 football pitches.

Altogether they stand for a total installed capacity of 41 megawatts and an estimated annual power output of 41 million kilowatt hours.

This supply is able to recharge 4 billion smart phones, or launch 12 rockets to the moon, according to the company.

Around 30 percent of Budweiser, one of AB InBev's brands, in China is to be brewed with renewable electricity.