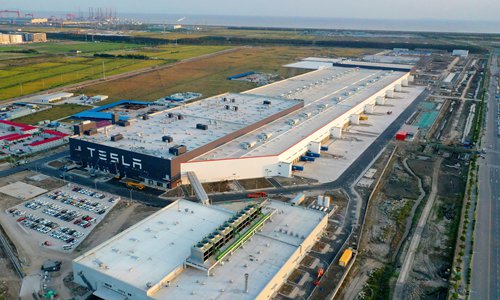 The second China International Import Expo (CIIE), scheduled for early next month in Shanghai, is definitely not an event that many overseas businesses will want to miss. Having attracted over 3,600 participants last year, enthusiasm for the upcoming expo is strong.

The CIIE provides a platform for foreign companies to seek out the potential of the Chinese market while helping them understand the needs of Chinese customers more clearly.

Many foreign businesses, CIIE participants and non-participants, have already expanded their presence in the world's second-largest economy, setting up manufacturing bases, regional headquarters, and research and development (R&D) centers.

Tesla's Gigafactory in Shanghai, which took less than 10 months to build, is ahead of schedule and already producing full vehicles on a trial basis.

"China is by far the largest market for mid-sized premium sedans. With the Model 3 priced on par with gasoline-powered, mid-sized sedans, we believe China could become the biggest market for the Model 3," the US electric car maker said in its earnings report this week.

Tesla purchased a plot of land in Lingang, Shanghai, for its Gigafactory in mid-October last year. The factory broke ground in January and is now the largest foreign-invested manufacturing project in Shanghai, with an investment of 50 billion yuan ($7 billion) and a designed annual production capacity of 500,000 units.

Tesla CEO Elon Musk said in August that he was "astounded" by the Gigafactory's construction progress, and that its speed was beyond what he had seen before. "I really think China is the future," he said.

China is Tesla's largest market outside the US, with sales jumping 41.8 percent year-on-year to $1.47 billion in the first half of 2019, according to Tesla.

Swiss tech giant ABB, which moved the global headquarters of its robotics business to Shanghai in 2006, began construction of a $150 million robotics manufacturing and research facility in Kangqiao, Shanghai, last month.

The new facility, expected to be put into operation in 2021, is designed to be the most advanced, automated and flexible factory in the global robotics industry, utilizing the latest manufacturing processes and becoming a cutting-edge center where robots make robots.

Sami Atiya, president of ABB Group's Robotics and Motion Division, said that the company's robotics product line will double in terms of both scope and depth in the next few years.

This means that ABB needs a new factory with a bigger capacity so that it can produce more types of robots to meet the ever-changing market and technological trends, Atiya said in an interview.

ABB has invested more than $2.4 billion in China, now its second-largest market, since 1992, and has a total workforce of over 18,000 in the country.

AkzoNobel, a Netherlands-based supplier of paints, coatings and specialty chemicals, entered the Chinese market in the early 1980s and has since set up 15 production bases in the country, its biggest single market.

"We know well that if we seek to win the global market, we should first win the Chinese market," said Mark Kwok, president of AkzoNobel China/North Asia.

The company has provided customized, environmentally-friendly solutions for the renovations of old neighborhoods in the Songjiang District of Shanghai. By 2018, it had helped revitalize 2.83 million square meters of Songjiang's old neighborhoods with colorful paints, brightening previously grey urban areas.

Through Shanghai, Kwok said that he can see China's determination for a wide-ranging opening-up, which can provide good opportunities for the growth of multinational companies in China and globally.