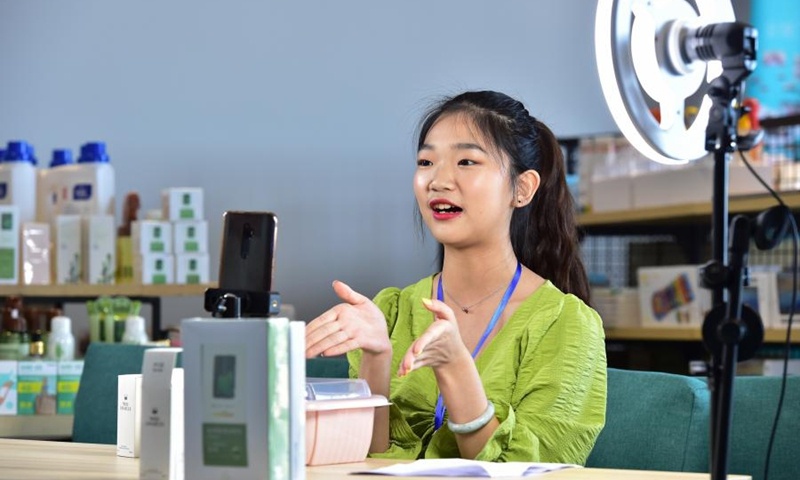 An applicant takes part in a qualification test for selling products via livestreaming in Yiwu, east China's Zhejiang Province, May 8, 2020. (Photo: Xinhua)

Despite the hurdles caused by the pandemic, providers of products and services worldwide can still reach out to the vast pool of Chinese consumers as global exhibitors embrace booming Chinese live-streaming platforms during their participation in the third China International Import Expo (CIIE) in Shanghai.

Against the backdrop of the growing digital trend, this year - for the first time - the CIIE integrated the new format of e-commerce live-streaming, allowing exhibitors and buyers who cannot be present to participate online. This new format has brought companies from China and abroad a bumper harvest amid the outbreak.

In front of the stand of kitchenware maker DeLonghi Group, the Global Times saw two employees doing live-streaming in front of a cellphone, demonstrating the functions of a blender to the audience.

This is the third consecutive year for DeLonghi to use live-streaming at the CIIE, and the group doubled the number of live-streaming events to twice a day, eyeing the business opportunity brought by China's booming live-streaming economy, Cai Huiting, product manager of the DeLonghi Group, told the Global Times on Monday.

"We gained tens of thousands of views for each live-streaming at the CIIE. Those who can't visit our stand in person are interested in our latest products," Cai said.

Cai said that the rise of live-streaming this year brought more business opportunities to the group.

"This year, nearly 20 percent of orders on our online stores were placed through live-streaming," Cai said, noting that sales of the company's  high-end food processing and cooking machines grew 50 percent in the first half of the year as people spent more time cooking at home during the pandemic and spent more money to improve their quality of life.

Singapore oral care brand Pearlie White, a newcomer to live-steaming at CIIE, told the Global Times on Monday that its Tmall livestreaming on the spot at the CIIE drew hundreds of views.

"We hope to use the format of live-streaming to strengthen our connection with consumers and introduce imported oral products to the Chinese market," Song Guanhua, general manager of Pearlie White China, said on Monday, noting that the brand plans to strength cooperation with big oral-care clinics in China, eyeing the fast-growing consumption market.

During the Expo, CCTV host Zhu Guangquan worked with Taobao host Wei Ya on Saturday, bringing a special live broadcast of goods from Russia, France, Spain and Germany, leading to sales of more than 105 million yuan ($15.9 million). Just a day earlier, another CCTV host Kang Hui teamed up with Taobao host Li Jiaqi and delivered a live show with goods from Italy, which led to sales of 40 million yuan.

Live-streaming e-commerce is becoming more popular and an integral part of online channels, and its scale is expected to reach 961 billion yuan in 2020, which will account for 10 percent of e-commerce in China, according to a report by Nielsen, a global data analytics company.

"Live-streaming e-commerce is gaining popularity as an alternative platform for brand marketing, and it is positioned to be another frontier of e-commerce," Justin Sargent, president of Nielsen China, told the Global Times on Monday.