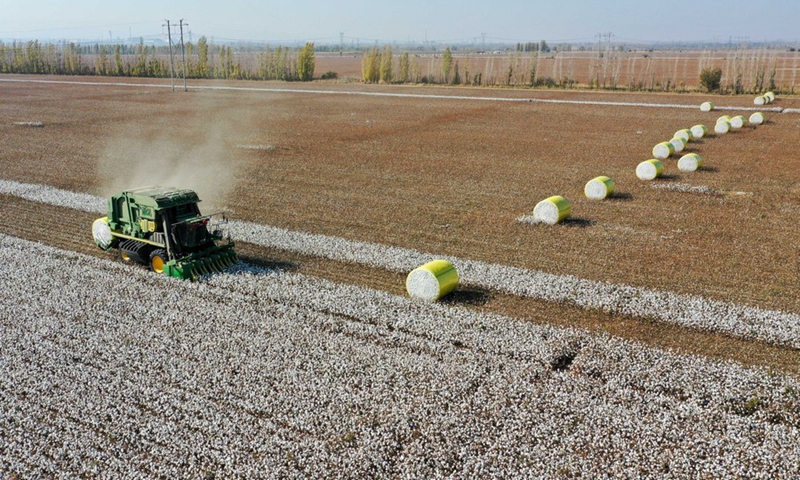 International fashion industry representatives have found themselves in an unprecedented situation as they are being forced to make a hard choice between cotton-related goods from China's Xinjiang region, a key global supplier, and elsewhere, as a result of the recent US import ban on all Xinjiang-related goods due to claims about "forced labor."

The administration of US President Joe Biden is trying to crack down on Xinjiang cotton and this has caused major problems for global industry participants, including those from countries in Asia, which are major suppliers for US garment companies. This comes at a time when the global supply chain is already facing high raw material costs, logistical hurdles and inflation, industry insiders said.

AI Manun Mridha, joint secretary-general of the Bangladesh-China Chamber of Commerce and Industry (BCCCI), told the Global Times in a recent written interview that Bangladesh is well aware of the US ban and is monitoring the issue very closely.

"We are against any kind of restrictions on free business. Ultimately, the business community and their consumer base around the world suffers badly due to this one-sided decision," Mridha said, noting that the world is still suffering from COVID-19 and the Russia-Ukraine conflict, and the US move will have a negative impact all over the world, including Bangladesh.

While Bangladesh does not import much cotton from Xinjiang, almost 60-70 percent of the country's yarn and fabric comes from China, the 2nd-largest garment producer in the world, according to the BCCCI.

"It's very hard to differentiate which yarn or fabric was or was not manufactured using cotton from China's Xinjiang region ... we are anxious about our supply chain as it is heavily inclined toward China and many of our members are large garment and textile manufacturers, so this decision has put them under huge pressure," Mridha noted.

Mridha said that their main markets for garment products are in Europe, and the US also buys garments from them.

Recently, the country passed the $52 billion mark for exports, and among that almost $42 billion came from exports of garments and textiles, according to the BCCCI.

The Uyghur Forced Labor Prevention Act (UFLPA), which came into force on June 21 after being signed into law by Biden on December 23, 2021, assumes that any product partly or wholly made in Xinjiang, is linked to the US hyped "forced labor" claim and subject to an import ban.

While some global industry representatives have managed to find other sources of imports to avoid falling victim to the ban, the industry is still in a tough position amid high inflation and rising cost pressures.

In the ninth annual Fashion Industry Benchmarking Study recently released by the US Fashion Industry Association (USFIA), it shows that US fashion companies are adopting a more diverse sourcing base in response to supply chain disruptions and the need to mitigate growing sourcing risks. But Asia remains the dominant base of sources for US fashion companies; eight of the top 10 most-utilized sourcing destinations are in Asia, led by China, Vietnam, Bangladesh, and India.

Reducing "China exposure" is one crucial driver of US fashion companies' sourcing diversification strategy, the USFIA said, especially with the implementation of the UFLPA.

The USFIA claimed that one-third of their surveyed respondents report sourcing less than 10 percent of their apparel products from China this year, but the association admitted that over 95 percent of respondents said they expect the UFLPA to affect their sourcing.

Asia, particularly China, continues to play a dominant role as a textile supplier, especially for fabrics and accessories, providing 93.8 percent and 87.5 percent respectively of the respondents' total imports, according to the USFIA.

Vietnam, another major player in the global fashion supply chain, has also felt the impact of supply chain disruption due to the US ban.

Do Pham Ngoc Tu, vice chairperson and secretary general of Vietnam Cotton & Spinning Association (VCOSA), told the Global Times that Vietnamese firms will need to wean themselves off raw materials produced in China's Xinjiang region in order to ensure long-term access to the US market.

Xinjiang produces 20 percent of the world's cotton. It is sent to countries in Southeast Asia, woven into a shirt or other piece of clothing, and then shipped on to the US - 16 percent of the clothing in the US contains cotton fiber from Xinjiang, Do Pham Ngoc Tu noted.

In order to abide by the new US law targeting China's Xinjiang goods, Vietnamese manufacturers must prepare documents to prove due diligence in evaluation of their supply chain, and the manufacturer must replace materials from Xinjiang, or they must fulfill corresponding documents.

Regarding the impact of the Xinjiang cotton ban, the issue mostly affects the garment manufacturers, not spinners in Vietnam, the vice chairperson said.