Intl carmakers must ensure quality, services of their products: Experts 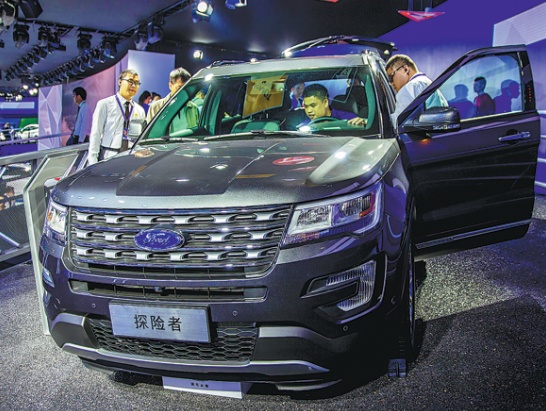 Visitors try out a Ford Explorer model at an auto show in Guangzhou, Guangdong province. (Photo provided to China Daily)

International carmakers should ensure the quality of both their products and services in China, which would prove crucial to their development in the largest and most competitive automotive market, experts warned on Tuesday.

"They should at least have a correct attitude to problems when they arise. It is obvious that people will turn away from irresponsible brands," said Yale Zhang, managing director of Shanghai-based consulting firm Automotive Foresight.

Zhang's remarks came after China's CCTV revealed that United States carmaker Ford and Japanese carmaker Nissan's premium marque Infiniti failed to repair faulty transmissions in some of their models, and even tried to cover it up.

In footage aired Monday night on CCTV, Infiniti dealerships admitted that the QX60 SUV's transmissions were problematic, but they coerced car owners to keep silent about the issue.

Some of Ford's models, including the Ecosport SUV, were found to have poorly-designed transmissions. Though they have replaced the transmissions in new models, they have failed to take good care of those who own the faulty ones.

Both Infiniti and Ford's Chinese joint venture, Changan Ford, apologized after the program aired. Infiniti promised to extend the warranty for all the customers concerned, and Changan Ford said it would repair transmissions free of charge.

China was one of the largest markets for Infiniti, but its sales have been shrinking in the country in the past years because of its small number of models and dealerships. Ford suffered a sales fall in China for about three years beginning in 2016 but its sales gradually rebounded in 2020.

Roy Lu, director of Auto Gasgoo Research Institute, said the exposure of Infiniti and Ford by Chinese media, including CCTV, should serve as a lesson to others, and it is better to solve the problem before a brand image is tarnished.

"It is such a competitive market, where you can find so many brands, and those who are not trustworthy will lose their chance," he said.

Chinese authorities are strengthening supervision and making it easier for customers to report faulty products to protect their rights and interests.

Statistics from the State Administration for Market Regulation showed that carmakers in China made 199 recalls of a combined 6.78 million vehicles last year, which was 3.9 percent more than in 2019. Engines, brakes and transmissions were the major culprits.

Lu called for more attention from authorities and customers to electric and smart vehicles, as their numbers are growing in the country, as well.

China has been the largest market for electric cars and plug-in hybrids for six years in a row, with 5.5 million units on its roads by the end of 2022, according to the China Association of Automobile Manufacturers.

"So I think the legislators could take into consideration such vehicles that are more and more controlled by batteries and software," Lu said.