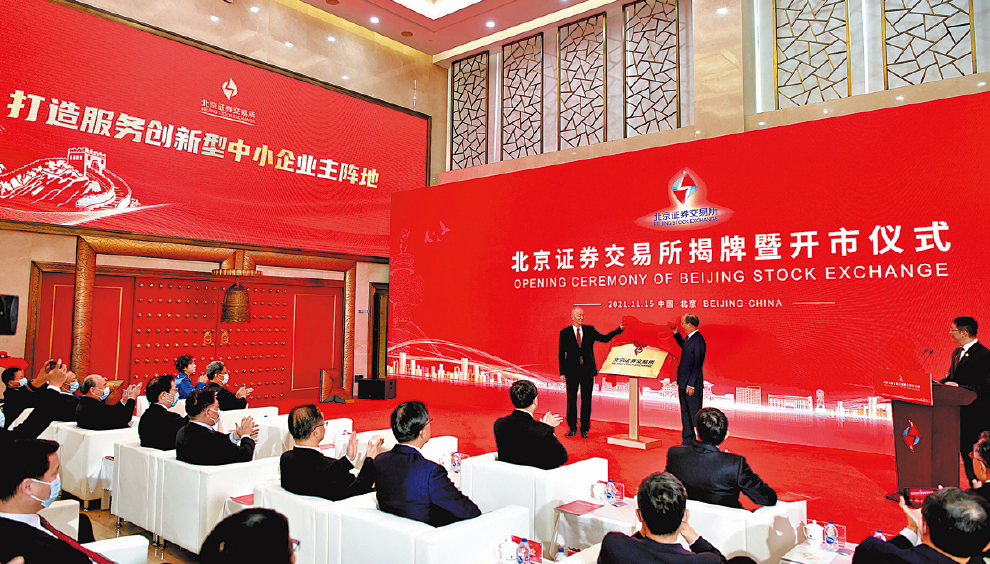 Cai Qi, a member of the Political Bureau of the 19th Central Committee of the Communist Party of China and secretary of the CPC Beijing Municipal Committee, and Yi Huiman, chairman of the China Securities Regulatory Commission, attend the opening ceremony of the new Beijing Stock Exchange on Monday. [Photo/Xinhua]

Investors' enthusiasm for the Beijing Stock Exchange, which debuted on Monday, can be seen in the burgeoning prices of the 10 companies trading on the new bourse, all of which surged more than 60 percent and triggered the intraday trading suspension mechanism twice.

The daily price fluctuation of BSE-listed companies has been set at 30 percent, though there was no limit on the first trading day. However, trading will be suspended for 10 minutes if a company's price is up by 30 percent from the opening quotation, and paused for another 10 minutes if the price is up a total of 60 percent.

It took only 74 days for the BSE, which is seen as nurturing more technologically advanced small and medium-sized enterprises, to grow into full swing from inception. The bourse is initially built upon the NEEQ Select, the highest tier of the 8-year-old National Equities Exchange and Quotations system.

The average sales revenue for the first 81 BSE-listed companies came at 600 million yuan ($94 million) last year, while their average net profit approached 69.4 million yuan. The vast majority of the companies－87 percent－are from advanced manufacturing, modern services or strategic emerging industries, with the average annual research and development investment valued at over 25.3 million yuan in 2020.

The inauguration of the BSE marks another major step in the high-quality development in China's capital market, said Yi Huiman, chairman of the China Securities Regulatory Commission, at the opening ceremony for the new exchange. Signaling a new start for China's inclusive financial services, the BSE should coordinate its development with other exchanges in China so that a wholesome multilevel capital market can be built, he said.

The BSE's chairman, Xu Ming, said at the opening ceremony that efforts will be made so that small and medium-sized enterprises will have easier access to the exchange. More trading products and tools will be tested at the BSE to facilitate companies' financing, he said.

There are now about 2.1 million eligible BSE investors, and the exchange estimated that the number will exceed 4 million by the end of the year.

Eugene Qian, chairman of UBS Securities, said that the threshold of 200 million yuan of market cap for BSE-listed companies, with no emphasis put on net profit, will better serve innovative SMEs. It is hoped that the BSE will differentiate itself from the other boards in China and become the Chinese version of Nasdaq, where technology startups can grow into large-cap companies, he said.