Chinese investors have rushed into the domestic chipmaking sector, as they remain positive on the industry's growth after being cornered by the Trump administration, industry analysts said on Sunday. 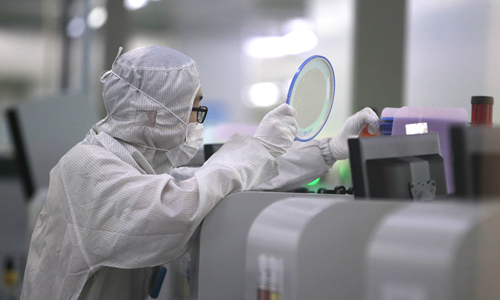 More than 140 billion yuan ($21.6 billion) flowed into semiconductor companies in 2020, nearly four times the amount in 2019, according to media reports. It was also the year when China's chip companies received the most investment on the primary market.

Experts said that the investment frenzy was a kind of collective awakening, after the US placed sanctions on Chinese semiconductor companies such as Semiconductor Manufacturing International Corp.

"Chinese investors are confident that China's chipmakers will be forced, as a result of the US crackdown, to grow on their own, and the industry has great potential because of China's huge market and production capabilities," independent telecom analyst Xiang Ligang told the Global Times.

Zhang Yi, CEO of Shenzhen-based iiMedia Research, said that investors previously hesitated because most of these companies had no way to be listed in China, since they often had difficulties making profits in the short term. Now that the Science and Technology Innovation Board has come into being, those worries have dissipated.

According to Xiang, the lack of capital hindered the development of China's chip industry, particularly production, in the past 20 years. The costs of chip assembly lines and chipmaking equipment were very high, and private companies were reluctant to invest.

Since investment capital has started to flow into the industry, experts are confident that companies will grow fast and break technological bottlenecks.

"I believe it would take China less than three years to research chips used for consumer goods like portable computers and mobile phones, an area where China still lags behind some countries," Zhang told the Global Times.

But Xiang cautioned that there are still some risks. For example, some local governments might see the chip sector as an opportunity and establish industry parks to nurture such companies, but they don't have the ability to guide the companies' direction and will just waste money. Also, he said that speculative funds might enter the sector.