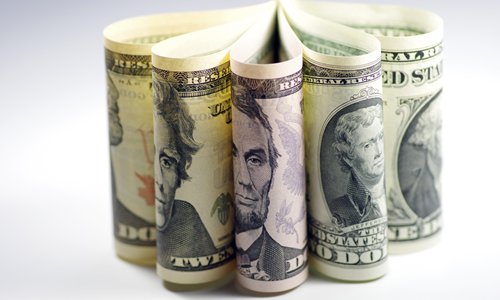 Overseas investors' eagerness for China's freshly issued US dollar-denominated bonds shows their trust in China's economic stability, experts told the Global Times on Thursday.
"They [the investors] know that the possibility of default on the bonds is nearly zero. There are barely any risks with this investment," said Xi Junyang, a finance professor at the Shanghai University of Finance and Economics.
"We can also see that they have firm belief in China and are not swayed by any negative judgment from the major global credit rating agencies about China's economy," he told the Global Times.
US-based credit rating agency S&P cut China's long-term sovereign credit rating by one notch to A+ from AA- in September. Moody's, another US-based rating agency, also cut its credit rating for China in May, the first time it had done so since 1989.
China has not used the ratings of major global credit agencies like S&P in this round of bond issuance, which is "a break with tradition," Shao Yu, chief economist at Shanghai-based Orient Securities, told the Global Times on Thursday.
China's Ministry of Finance (MOF) announced on Tuesday its decision to sell $2 billion worth of US dollar-denominated bonds, its first sale of such bonds in more than a decade. China issued $1.7 billion worth of US dollar-denominated bonds in October 2004.
According to a Reuters report on Thursday, orders from international investors for the new bond offering topped over $10 billion in the first hour after books opened on Thursday.
"The scale of this bond offer is relatively small and global bond interest rates are relatively low on average, which has also increased the popularity of the bonds," Xi noted.
The new Chinese sovereign bonds will be priced to yield 0.5 percentage points over comparable US Treasury securities, according to overseas media reports.
The central government has reportedly entrusted a number of domestic and overseas banks for bond trading. One of them, the UK-based Standard Chartered Bank, didn't comment as of press time when contacted by the Global Times.
Financial opening-up
"The bond issuance shows China's eagerness to participate in global financial activities, as the country is making efforts to promote financial opening-up," Xi noted, adding that the move would also be beneficial for the internationalization of the yuan.
China has launched a series of efforts to open up its financial sector, including launching stock link mechanisms between Hong Kong and the mainland, as well as promoting inclusion of the yuan into the IMF's Special Drawing Rights currency basket.
According to a statement published by the MOF on its official website on Tuesday, raising capital is "not its first consideration" in this bond issuance as China already has abundant foreign currency reserves.
China's foreign currency reserves reached $3.11 trillion by the end of September after rising for eight consecutive months, according to data from the People's Bank of China, the country's central bank.
"Financing is not the No.1 purpose of the issuance. More importantly, the government issued the bonds as part of the efforts to enrich the categories of its offshore financial products, as inadequate financial products would negatively affect overseas credit rating agencies' evaluation of China," said Shao.
Yu Fenghui, a financial commentator, criticized the US credit agencies for adopting an "outdated" method for measuring China's economic status.
"They are not able to get core statistics on the Chinese economy with their use of traditional, instead of novel, technological methods to evaluate a country's economy," Yu told the Global Times Thursday.
"China's issuance of US bonds, and the fact that they have been well received globally, shows China's rising economic competence. It also shows that the judgment of the major credit agencies is not correct," Yu said.
China is expected to have had GDP growth of 6.9 percent in the first three quarters of this year, a statement from the National Bureau of Statistics showed on October 20.