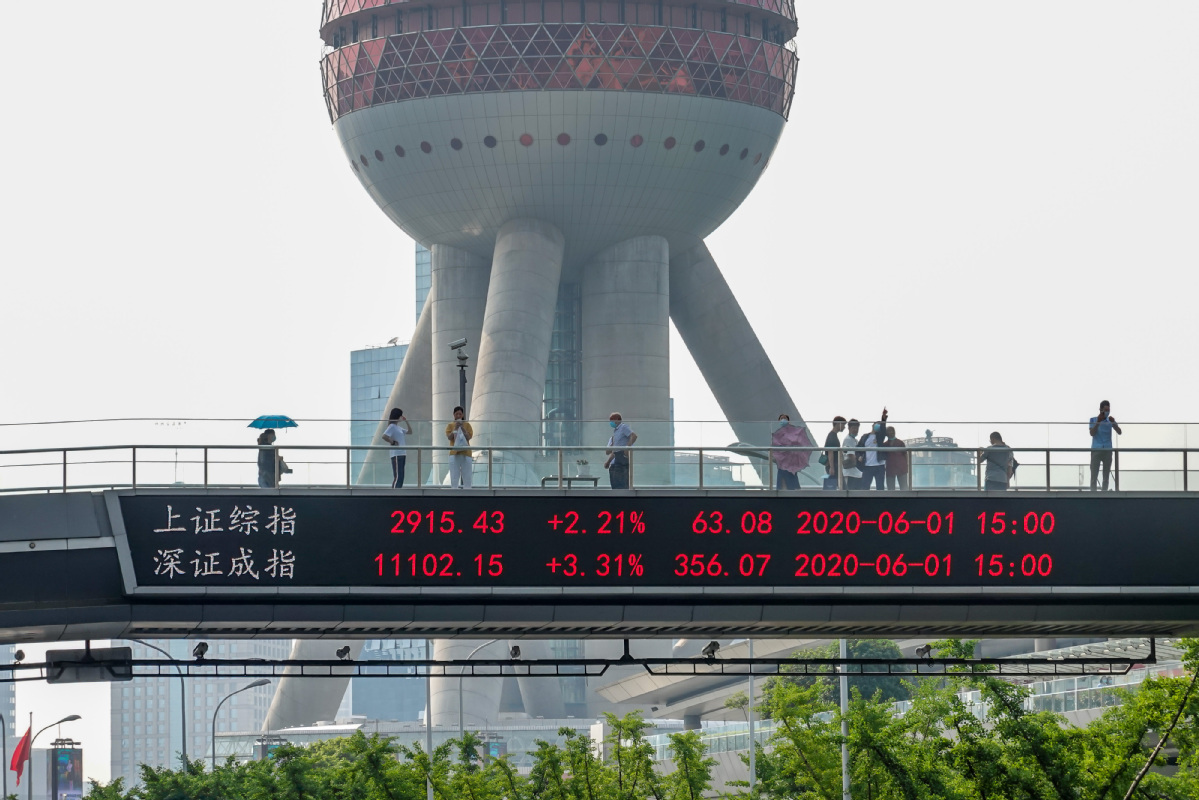 A-share indexes are displayed on a big screen on one side of an overpass in Lujiazui area, Shanghai, on June 1. [Photo by WANG GANG/FOR CHINA DAILY]

While global capital markets have been hit by the COVID-19 pandemic, Chinese bourses have shown resilience by reporting stable initial public offering activity and a strong forecast for mergers and acquisitions for the coming months, said global professional services provider EY.

EY's latest quarterly IPO report released in late March said the A-share market reported 52 IPOs during the first quarter, compared to 30 during the same period in 2019. The majority, or 34 IPOs, were completed on the Shanghai Stock Exchange while the Shenzhen bourse was responsible for the rest.

Total financing of the 52 IPOs stood at $11.3 billion, which is more than three times the value recorded during the same period last year. Financing for Beijing-Shanghai High Speed Railway Co Ltd, which went public on the Shanghai Stock Exchange on Jan 16, amounted to over 30 billion yuan ($4.23 billion), which was the largest IPO worldwide in the first quarter. Thanks to this, the financing registered on the Shanghai Stock Exchange totaled $9.8 billion in the first quarter, and in turn helped the A-share market dislodge all the other markets in the world in terms of total IPO value over the period.

Though the novel coronavirus epidemic hit the country hardest in February, the A-share market recorded 21 IPOs in May, while the number was 16 in January. Industry, technology and healthcare players reported the most IPOs over the first three months.

The technology-focused STAR Market on the Shanghai Stock Exchange also contributed to the record numbers, accounting for 44 percent of IPOs and 36 percent of total financing, EY said.

Publicly available information showed there were 416 companies awaiting IPO approvals from the China Securities Regulatory Commission as of the end of March. The STAR Market had more than 100 companies waiting to be listed.

The country's new Securities Law, which took effect on March 1, said a registration-based IPO mechanism will be implemented on different boards step by step. Once the policy is carried out, companies waiting in long queues for IPOs can submit their applications to stock exchanges, and China's IPO activity is expected to remain stable over the next few months, EY added.

"We are prudently optimistic about China's economic growth and IPO activity for the next three quarters. China has come up with timely policies to better combat and control the COVID-19 outbreak and we expect more stimulus measures to be taken. Once the contagion ends, these policies will further drive up the country's economic development and IPO activity," said Terence Ho, EY China IPO leader.

Meanwhile, in a survey released by EY last month, about 57 percent of 170 polled company executives in China said they would carry out M&As in the next 12 months. Oil and gas, mining and metals as well as high-end manufacturing are sectors in which Chinese companies are looking for the most investment opportunities.