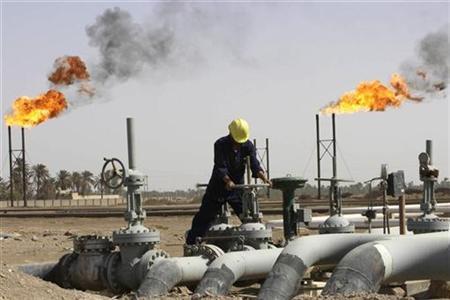 The Iraqi Ministry of Oil signed on Sunday initial contracts with the United Arab Emirates (UAE) Crescent Petroleum company for exploration and development of three oil and gas blocks near Iraq's eastern and southern borders.

The three blocks are Kilabat-Gumar and Khashim al-Hmer-Injana in Iraq's eastern province of Diyala, and Khudhr al-Maa in the southern province of Basra, according to Abdul-Mahdi al-Amidi, director general of Contracts and Petroleum Licenses Department.

The initial contracts will be sent to the Council of Ministers, headed by Prime Minister Haider al-Abadi, for approval before the final signing, a ministry statement cited Amidi as saying.

Such "contracts are optimal investment for oil and gas wealth in these fields and exploration blocks in the border areas which have been neglected for decades," Luaibi noted.

Abdulla al-Qadhi, executive director of exploration and production in Crescent Petroleum company, said the blocks will begin production in three years after signing the contracts, and his company will invest in the associated and non-associated gas reserves in addition to extracting the crude oil.

On April 26, Iraq issued six licenses to foreign firms to explore and drill for oil and gas, three of which were awarded to the UAE Crescent Petroleum.

China's Geo-Jade Petroleum Corporation won the rights to explore the blocks of Naft Khana in Diyala Province and Huwieza in Iraq's southeastern province of Maysan.

Another Chinese company, United Energy Group (UEG), won the license to develop the al-Sindibad block in the southern province of Basra.

April's energy auction was the fifth for Iraq since the country opened its oil and gas sector for foreign investment in 2009.

Iraq wants to increase its crude oil production to more than 5 million barrels per day (bpd) from its current 4.35 million bpd.

Iraq's economy relies heavily on oil, which generates over 90 percent of its revenues.