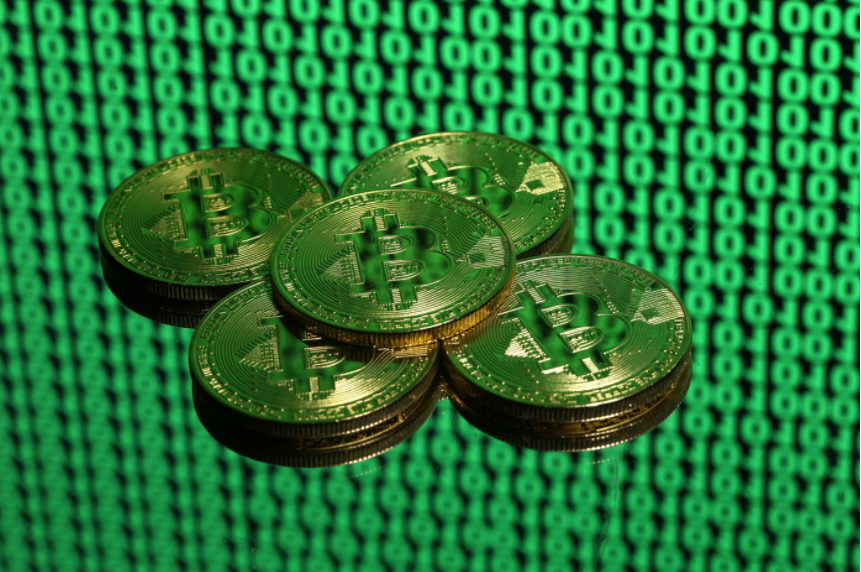 Tokens of the virtual currency Bitcoin are seen placed on a monitor that displays binary digits in this illustration picture, December 8, 2017. Photo: REUTERS/Dado Ruvic/Illustration

Israel’s markets regulator will propose regulation to ban companies based on bitcoin and other digital currencies from trading on the Tel Aviv Stock Exchange, he said on Monday.

Shmuel Hauser, the chairman of the Israel Securities Authority (ISA), told the Calcalist business conference he will bring the proposal to the ISA board next week. If approved, it would be subject to a public hearing and then the stock exchange bylaws would need to be amended.

“If we have a company that their main business is digital currencies we would not allow it. If already listed, its trading will be suspended,” Hauser said, adding the ISA must find the appropriate regulation for such companies.

Hauser did not identify any companies that would be affected by his ban, but at least two firms listed on the Tel Aviv Stock Exchange (TASE) now describe digital currencies or the technology behind them as essential to their business: Blockchain Mining (BLCM.TA) and Fantasy Network (FNTS.TA).

Shares of Blockchain, which on Sunday changed its name from Natural Resources, have soared some 5,000 percent in the past few months since it announced it would shift its focus from mining for gold and iron to mining cryptocurrencies.

It was down 4.2 percent in afternoon trading on Monday. Blockchain was not immediately available for comment.

Fantasy Networks (FNTS.TA), a former gaming firm, said this month it was studying the possibility of operating in the blockchain field -- the technology underpinning cryptocurrencies. Its share price quadrupled before losing 50 percent in the past two weeks.

Earlier this month, Hauser said bitcoin-based companies would not be included in stock exchange indexes.

In a Dec. 19 statement to TASE, Fantasy Networks acknowledged those remarks, saying: “These restrictions ... could harm investment in the company and even exclude it from trade on the stock exchange.”

Bitcoin is a publicly available ledger of a finite number of digital “coins”, which backers say can be used as a currency without the support of any country’s central bank. It is “mined” by computers, which are awarded new coins for working out complex mathematical formulas. Several other cryptocurrencies have also been launched that work on similar principles.

The value of a bitcoin plunged by 30 percent to below $12,000 on Friday as investors dumped the cryptocurrency after its sharp rise to nearly $20,000. It recouped some losses to trade above $14,000 BTC=BTSPon the Bitstamp platform, down 9 percent on the day.

“We feel that the prices of bitcoin behave like bubbles and we don’t want investors to be subject to that volatility and uncertainty,” Hauser said. “There is an importance to signal to the market where things are... Investors should know where we stand.”

The proposal to block digital currency firms from the stock exchange will probably be the last move for Hauser, who will step down next month after 6-1/2 years as ISA chief.

“But once it’s on its way it will continue to be pursued,” said Hauser, who will be replaced by Anat Guetta.

He said he hopes she will promote easing capital gains taxes and focus on regulatory enforcement.