BUSINESS Israeli start-ups turn from US to Asia for vast funding, market potential

Israeli start-ups turn from US to Asia for vast funding, market potential 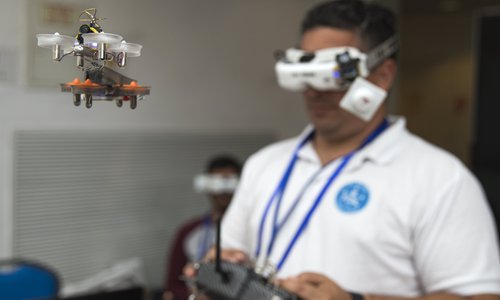 A man flies a miniature drone at the OurCrowd Global Investor Summit in Jerusalem, Israel on Thursday. Photo: IC

Israeli start-ups are beginning to turn their attention to the Asian market, especially to China and India, due to the region's quickly expanding middle-class demographic."Among the $650 million we raised in 2017, half came from Asia," said Roland Wee, managing director of Asia operations at OurCrowd, the largest equity crowdfunding platform in the Middle East. He made the remarks on the sidelines of the company's annual investor summit held in the Jerusalem Convention Center on Thursday, which attracted about 10,000 attendees in person and online from over 90 countries and regions, including 1,000 start-ups, 500 multinational firms and 500 venture capitalists. In a local market of only 8.6 million, the usual practice for most Israeli companies since inception has been to bring their products to the US market, using it as a gateway to reach further global customers. Once the products succeed, the companies often attempt to spread their businesses to different corners of the world via their US offices. "That trend is changing," said Wee. "Israeli companies are starting to think whether they need the US in between."According to a report released in 2017 by the Brookings Institution, middle-class expansion in Asia is expected to become broadly based and heavily concentrated, especially in China and India. The vast majority, precisely 88 percent, of the next billion middle-class people will be Asian. In China and India, Asia's two biggest countries, Israel's image has been relatively positive, which bodes well for Israeli companies that are attempting to enter those markets. During the breakout session on Asia at the summit, Janet Young, head of Group Channels and Digitalization at United Overseas Bank Ltd (UOB), said her message to the Israeli start-up ecosystem was: "The 21st century is an Asia-Pacific century, not only for demographic reasons, but also for economic vitality and social stability." "Instead of just being US-oriented, they need to balance the pivot," said Young. OurCrowd has put in place three offices across Asia, namely in Hong Kong, the island of Taiwan and Singapore, in an aim to radiate investors across the whole eastern hemisphere. "While witnessing a surging demand in Asia to invest in Israel's start-ups, we are also seeing a growing number of Israeli investments in Asia's small and medium-sized enterprises [SMEs]," said Young. Entrepreneurs, start-ups and SMEs worldwide face the common problem of sourcing funds, where venture capital has a role to play. "It is always a two-way thing," she said. She also warned of challenges ahead for Israeli companies operating in Asia. "They need to know about the diverse cultures in Asia and our way of doing things.""Our partnership with OurCrowd is a natural extension of our interest in nurturing the growth of small businesses," Young said. "We've been closely watching the Chinese market," Wee said, although, he said, among the 25,000 registered investors from 112 countries and regions, only a little over 100 came from China. "The number is quite small," said Wee, who partly attributed OurCrowd's slow progress in China to the current capital restrictions from the central government, which have caused overseas withdrawals to be capped. According to Wee, OurCrowd is rigorously seeking Chinese companies to partner with out of a need to align operations with local regulations. Wee feels that there is an evident strong desire from the Chinese side to invest in Israeli start-ups, adding that their offices in Hong Kong and Singapore have seen an increase in investors from the Chinese mainland. The influx of Chinese investment in Israel since 2011 demonstrates Asian interest in Israeli technology.Investment from China in Israeli technology, including agriculture, pharmaceutical, medical devices, artificial intelligence and autonomous driving, has soared to a total of $15 billion over the past seven years, from practically zero.Under the innovative and comprehensive partnership between China and Israel, the latter's innovation ecosystem can find ample space to develop and expand as China embarks on a path to transform its economy into a more innovative one that focuses on high-tech and high-end manufacturing.