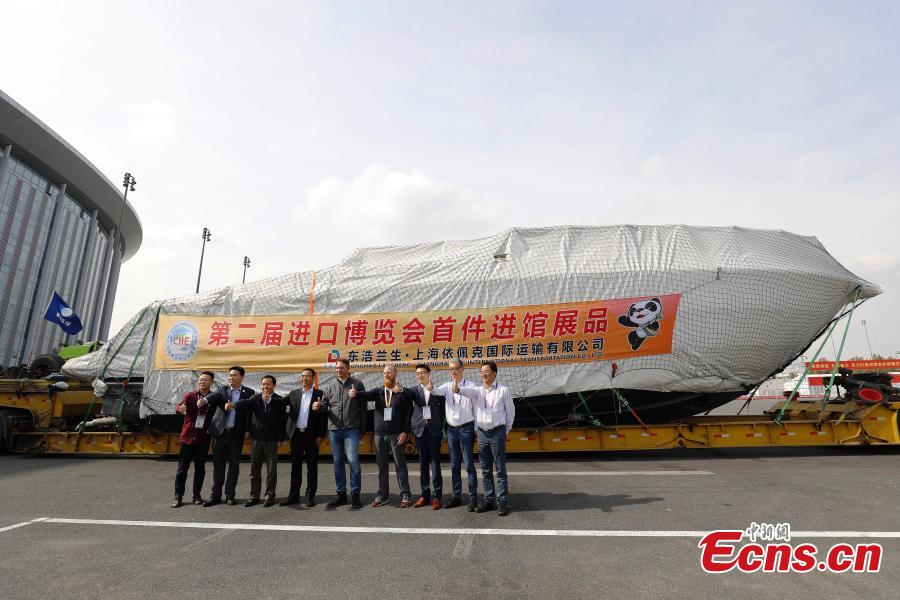 A 20-meter-long patrol vessel from Italy has become the first exhibit to enter the venue of the upcoming second China International Import Expo (CIIE) in Shanghai.

The FSD 195 fast patrol boat, made by Italian shipbuilder Ferretti, will make its Asian debut at the expo, which will be held from Nov. 5 to 10.

Over 170 Italian companies are scheduled to take part in the expo, showcasing a variety of lifestyle and luxury products such as sports cars and fashion pieces.

Daniel Chen, the chief representative of Ferretti's Shanghai office, said the Italian company looks forward to potential buyers and partners for its security boats during the fair.

Since showcasing its luxury yachts at last year's CIIE, Ferretti has sold several large yachts to Chinese consumers and has boosted its brand awareness in China, he said.

Luxury vehicle manufacturer Maserati is another Italian enterprise that will attend the CIIE for a second year.

A brand under the Fiat Chrysler Automobile Group, Maserati will showcase "the entire range" of its new cars, including two special editions, at its 200-square-meter booth at this year's CIIE, said Bordiga.

"The point (of attending CIIE) is showcasing our brand, our technology, our presence in the Chinese market so we can play our part in China's development and opening-up," he said.

In the next three years, Maserati will launch 10 new cars and by 2023 each Maserati car will have an electric version, Bordiga said.

"All these new products will also come to China. And given the fast development of electric cars in China, we are very confident that with these cars, we can reach even younger Chinese customers," he said.

Having lived in China for 15 years, Bordiga said his adopted home shared many similarities with Italy, such as a love of food, family, good life and a hard-working spirit.

Ferrero, the third-largest chocolate and confectionery company in the world, aims to double its sales revenue in China in the following five years, Mauro De Felip, general manager of Ferrero China, told Xinhua.

"China is a core priority for Ferrero in terms of growth in the future. The middle class in China is already quite big, and is expected to grow even more," said De Felip.

In the past six years, Ferrero's sales revenue has been growing steadily in China, reaching a 28 percent market share, up almost 10 percentage points, according to the research firm Nielsen Corporation.

Due to the differences in eating habits, the per capita consumption of chocolate in China remains relatively small compared with European markets, therefore Ferrero needs to "look beyond chocolate," said De Felip.

"We need to look larger and look into opportunities in other markets and categories, like biscuits and confectionery goods, which are big markets in China," he said.

Earlier this year, the Ferrero Affiliated Company acquired Kelsen Group, which makes cookies and baked snacks under the brands Royal Dansk and Kjeldsens.

At the upcoming CIIE, Ferrero will launch its Kinder Happy Hippo biscuits in the Chinese market, as part of its long-term plan to introduce more "sweet packaged food" in China, said De Felip.

"We consider it (CIIE) a good opportunity to showcase our portfolio, meet a lot of stakeholders and get firsthand feedback from potential customers," he said.

Another Italian company IVECO will exhibit five premium vehicles at this year's CIIE.

"In spite of international economic uncertainties, the Chinese market remains the most important for many foreign firms. We attended the CIIE last year to show that we believe in an open market and it was a good starting point," said Croce.