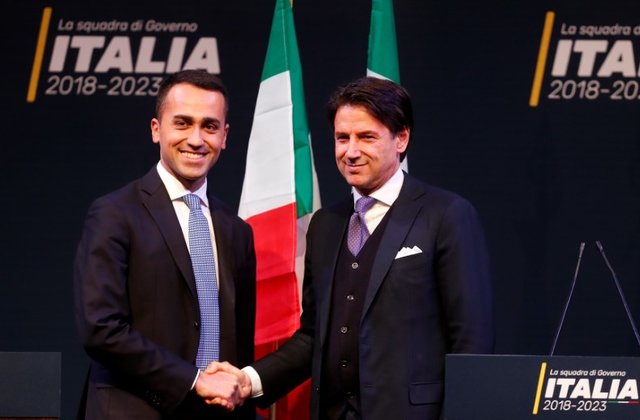 5-Star Movement leader Di Maio shakes hands with Giuseppe Conte, who would be Minister for Simplification of Public Administration with the Parliament in any 5-Star government, during the presentation of the would-be cabinet team, ahead of election in Rome, Italy, March 1, 2018. REUTERS/Remo Casilli

Italy’s anti-establishment 5-Star Movement on Thursday named a university professor as its proposed economy minister if it is called to form a government after the March 4 election.

The last opinion polls published before a blackout was imposed two weeks ago, showed 5-Star as the most popular party, scoring around 28 percent, but Italy’s complex voting law makes it unlikely to be able to govern alone.

The group founded in 2009 by comedian Beppe Grillo is naming ministerial candidates, with an eye to countering charges its officials are too inexperienced.

5-Star leader Luigi Di Maio said Andrea Roventini, 40, an associate professor of economics at the Sant‘Anna School of Advanced Studies in Pisa, was a world leader in his field and would head the Treasury in any 5-Star government.

“We are not proposing a government of technocrats. The people we have picked put their hearts and minds into everything they do. They know what they are talking about,” Di Maio told reporters. “I challenge the other (parties) to do better.”

In an interview with Il Sole 24 Ore on Thursday, Roventini pledged to re-negotiate the European Union’s fiscal compact, describing a 3-percent limit imposed on budget deficits as a “fetish”.

Roventini said 5-Star would aim to reduce Italy’s debt, proportionately the highest in the euro zone after Greece‘s, without privatizing state-owned companies, a strategy which has yielded disappointing results for the current government.

Economists fear all the parties’ electoral pledges would add unsustainably to the debt pile, but Roventini said presenting credible plans would be his priority.

“There will be no space in our budget for bizarre or utopian ideas, we will pay more attention to growth and public investments, keeping the accounts balanced,” he said.

National statistics institute ISTAT said on Friday Italy’s debt fell to 131.5 percent of gross domestic product (GDP) in 2017, up from a record high of 132.0 percent in 2016.

The budget deficit came in at 1.9 percent of GDP last year, ISTAT said, down from 2.5 percent the year before and below the government’s target of 2.1 percent.

ISTAT cautioned that the deficit and debt figures could be revised up because they do not include money used by the government to save two regional banks in northern Veneto.