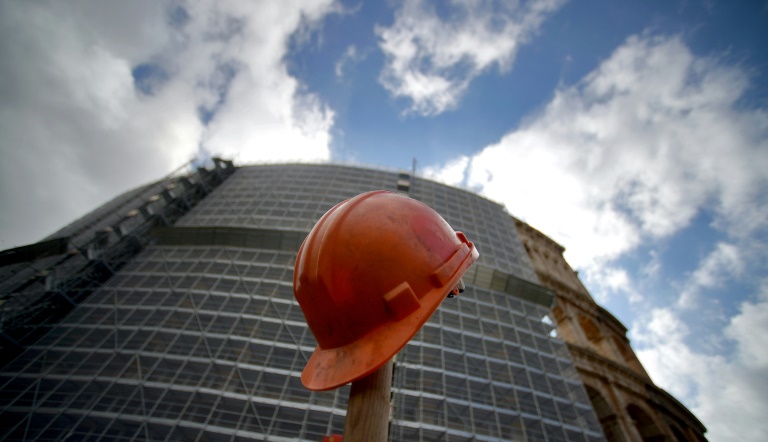 The 0.2 percent contraction of Italy's economy -- following a 0.1 percent fall in the third quarter -- will put pressure on the populist government in the eurozone's third largest economy. (Photo: AFP)

The Italian economy contracted in the fourth quarter of 2018, dragged down by slowing European growth and global trade tensions, plunging the country into a technical recession, official data showed Thursday.

The 0.2 percent contraction -- following a 0.1 percent fall in the third quarter -- will put pressure on the populist government in the eurozone's third largest economy, which took power in June on the back of big-spending electoral promises.

Italy is Europe's second largest manufacturer and is currently the only European Union member in recession, although growth in export powerhouse Germany also fell in 2018.

The Italian economy suffered a harsh recession in 2012-13 and has enjoyed only slow growth since then. Overall growth for full-year 2018 was just 0.8 percent.

Italy's Prime Minister Giuseppe Conte had anticipated the bad news on Wednesday during a business conference in Milan.

"Analysts tell us we'll likely still suffer a bit at the start of this year," he said, pointing the finger at a slowdown in China and Germany which are hurting Italian exports.

"But all the elements are there to recover in the second half," Conte added.

The coalition government of the anti-establishment Five Star Movement (M5S) and the far-right League party was forced to water down its ambitious and costly budget in December to avoid being punished by the European Commission and the financial markets.

A slowdown will make it even harder to follow through on expensive vote-winning measures both parties promised their bases, from reform of the pension system to income support for the poor.

Thursday's data "reflect a marked worsening of the industrial sector's performance, and of a negative contribution of agriculture," national statistics institute Istat said.

The institute had earlier released December's unemployment rate, which fell to 10.3 percent from 10.5 percent, a positive sign. The jobless numbers rose 0.1 percent for young people aged 15 to 24, however, bringing the rate to 31.9 percent.

Growth in Germany fell from 2.2 percent in 2017 to 1.5 percent last year, while government economists on Wednesday predicted a gain of just 1.0 percent in 2019.

Mainland European growth is under threat from abroad, ranging from a slowdown in China to protectionism in the US or the growing risk that Britain will quit the European Union chaotically on March 29.

Italian business confidence has been falling since July, just after the populist government came to power.

"We must act when confronted with slowing global and German economies," said Vincenzo Boccia, the head of Italy's employers' federation Confindustria.

"It was obvious there would also be a slowdown in Italy given our country's export-oriented economy," he said, calling for public works projects to stimulate activity.