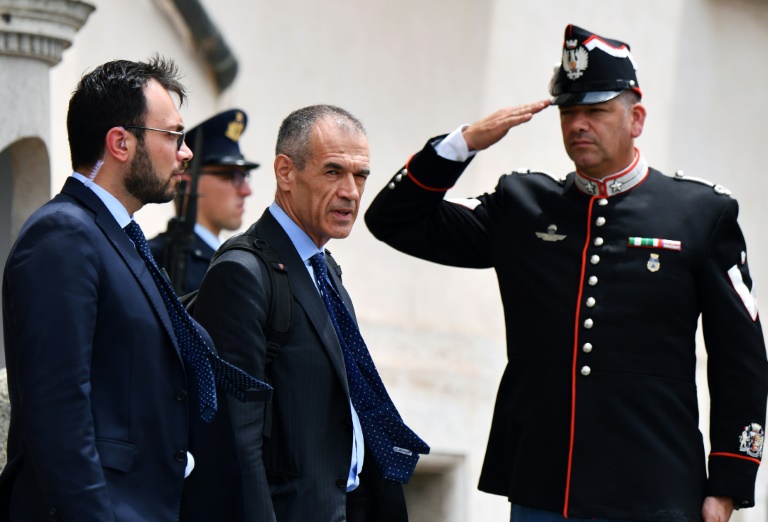 An economist has been given a mandate to form a government in Italy (Photo:AFP)

European stock markets and the euro dipped as chaos in Italy rattled investors who feared the nomination of a technocrat prime minister may fail on the long run to avert a eurozone crisis, analysts say.

Oil prices extended losses, meanwhile, after Saudi Arabia and Russia signalled they could raise output, while Asian stock markets rose on signs that Donald Trump's summit with Kim Jong Un could be back on.

The Paris and Frankfurt equities markets, which had opened in the green, dropped into the red in early afternoon trading after the Milan FTSE MIB stock exchange had a rollercoaster day.

After opening nearly two percent up, it suffered a dramatic plunge, before coming off its worst levels in mid-afternoon.

Italy is mired in political chaos over the anti-establishment Five Star Movement and the far-right League's bid to form a government.

The president has now appointed Carlo Cottarelli, a pro-austerity economist formerly with the International Monetary Fund, to lead a technocrat government, ahead of likely fresh elections in the autumn.

Just ahead of the nomination, Italy's debt-risk premium had soared to its highest level since November 2013.

Italy's 10-year bond yields -- the return an investor gets on holding the bond -- spiked to 233 points above that of German debt which is the eurozone's benchmark.

Yields typically rise at times of stress as investors demand higher returns if they are to buy a country's bonds.

Meanwhile the euro also dropped against the dollar in mid-afternoon trading after earlier positivity gave way to fear of a drawn-out crisis.

"The planned eurosceptic governing coalition will not initially be possible. However, it looks like there will be new elections in the autumn, which could see the populists emerge with a bigger share of the votes," Commerzbank Commodity Research analysts said in a note.

The single currency was also hurt by the prospect of upheaval in Spain, where Prime Minister Mariano Rajoy could face a no-confidence vote after his party was found guilty of benefiting from illegal funds in a massive graft trial.

Separately, the WTI oil futures contract tanked Monday, extending last week's losses, after Saudi oil minister Khaled al-Faleh said his country could open the taps wider in the second half of the year to insure against any supply shocks.

His Russian counterpart Alexander Novak said they discussed whether they need to ease production limits set in 2016.

With the London markets closed for a bank holiday, there was no official quote available for Brent oil, the European benchmark.

Asian markets meanwhile mostly rose on renewed hopes for a Trump-Kim summit after the US president appeared Friday to make a U-turn 24 hours after cancelling the meeting.

On Sunday Trump tweeted that a US team "has arrived in North Korea to make arrangements for the summit".

He added: "I truly believe North Korea has brilliant potential and will be a great economic and financial Nation one day. Kim Jong Un agrees with me on this. It will happen!"