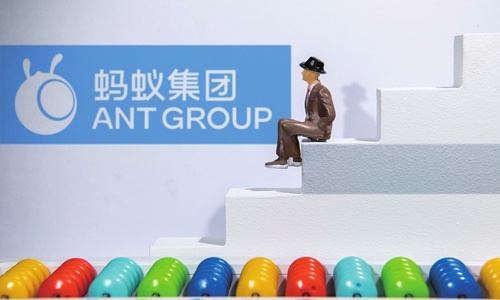 China's top financial regulatory authorities on Monday summoned Jack Ma Yun, the actual controller of Ant Group, and the chairman and the president of the Chinese fintech behemoth, ahead of its record-breaking dual listing in Shanghai and Hong Kong.

Ant Group will continue to uphold "safe innovation, embrace supervision, serve the real economy, openness and win-win," while improving its inclusive financial services, and underpinning economic and livelihood development, the fintech giant said late Monday in response to the summon.

The unexpected regulatory summon, however, reminded the market of Ma's controversial remarks at the Bund Summit in Shanghai in late October.

Describing traditional banks as operating with a "pawn shop" mentality, the Alibaba founder blasted global financial regulatory authorities for stifling innovation and urged the pursuit of a system in China that accommodates development.

Under the proposals released by PBC and CBIRC, loans extended to a single individual cannot exceed 300,000 yuan ($44,850) and loans to an entity cannot exceed 1 million yuan. Companies that seek to conduct online loan businesses must also meet high regulatory requirements, including approval by the State Council's banking regulatory authorities, according to the proposal.

On Sunday, a financial newspaper under PBC also published an article discussing "the potential risks and regulation of large internet companies entering the financial sector," written by a veteran scholar.

The story said tech firms such as Alibaba, Tencent, Baidu and JD.com, have been growing rapidly and continue to penetrate and develop into the financial field, which has changed the ecology of China's financial service sector and played a positive role in some sectors such as small and retail industries. However, it pointed out that these firms also bring problems such as "monopoly, unfair competition," and their "product and business boundaries are blurred."

The story says large internet firms also pose potential systematic risks, noting these firms are "too big to fail." It specifically pointed to Ant Group, saying once a risk exposure occurs, it will cause serious risk infection. It noted that Ant Group has more than 1 billion individual users, and 118 trillion digital payment transactions along with its pending listing that's expected to be shattering IPO records.

A big part of the market big internet firms serve are long-tail users who often lack professional financial knowledge and investment decision-making capacities and could be easily influenced by their peers. Massive market swings could therefore cause irrational behavior and evolve into systemic risks, the alarm-sounding article stressed.

The cross-sector financial offerings of internet titans also make the case for more alerts to the potential risks associated with their fintech strength, which add to their far-reaching internet coverage, similar business models and algorithms, stoke worries about financial risks being swiftly aggravated into systemic risks.

"Accelerating the construction and improvement of the regulatory framework for large-scale Internet companies is imminent," reads the story, adding that China should perfect its regulatory system, strengthen data management and develop regulatory technology to improve risk identification, prevention and disposal capabilities.

"It's necessary and timely to launch a new regulatory method to better guide and supervise the development of these high-tech firms," Liu Dingding, an independent tech analyst, told the Global Times on Monday, noting that regulators should find a balance by providing a good environment for their growth, while preventing these firms from developing "out of control."

The timing of the summon has some investors worried it could impact Ant Group's forthcoming $34.4 billion dual listings.

Its Hong Kong listing is expected to commence on Thursday, while the date for its listing on the STAR Market in Shanghai has yet to be announced.

There were high hopes that the offerings, hundreds of times oversubscribed by investors, would result in lucrative premiums on their debut. The summon, nonetheless, prompted some retail investors to fear a worse-case scenario of its shares falling below the IPO price. Ant Group's Shanghai offering is priced at 68.8 yuan apiece.

"It's less likely that the summon would hammer the stock debut," an individual investor who was lucky enough to win the online bid for one unit, or 500 shares of Ant Group told the Global Times on Monday.