TOKYO, July 21 (Xinhua) -- Japan may achieve fiscal consolidation in fiscal 2027, two years earlier than previously expected, with tax revenue rising despite the COVID-19 pandemic, according to the Japanese government Wednesday. 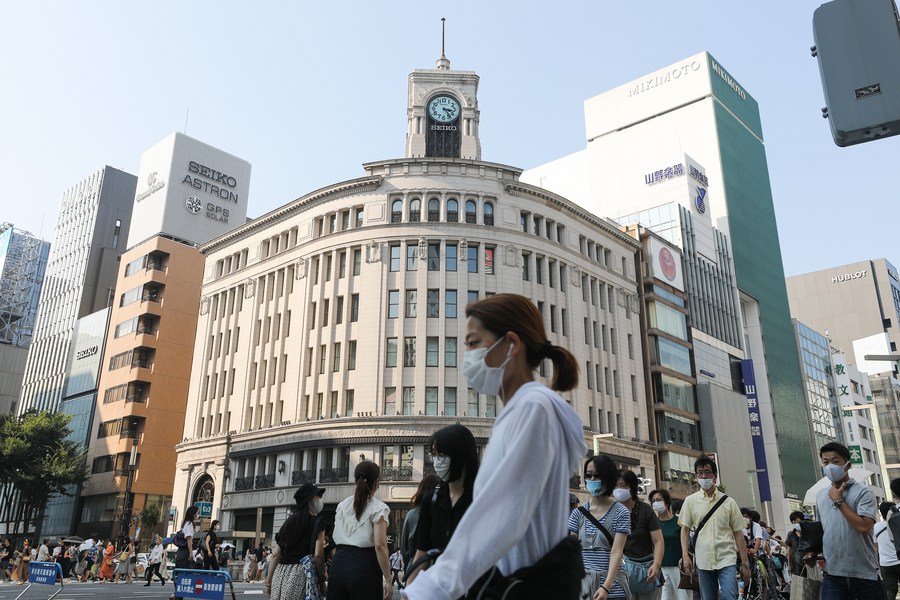 Japan's primary balance, which means tax revenue minus expenses other than debt-servicing costs, is expected to become black in fiscal 2027 with a surplus of around 1.8 trillion yen (16.4 billion U.S. dollars) under the rosiest condition, said the Cabinet Office in its biannual projection.

A previous forecast released in January showed the balance would remain in red ink with a 2.8 trillion-yen (25.5 billion dollars) deficit in the fiscal year through March 2028, and turn black in fiscal 2029.

However, the latest projection assumes Japan will miss its goal of attaining fiscal health in fiscal 2025.

The office said achieving the aim in fiscal 2025 would "come into sight" if Japan, the world's third-largest economy, will pursue the improvement of the balance by around 1.3 trillion yen (11.8 billion dollars) per year through struggles to simplify its spending.

The upwardly amended fiscal outlook was partly because of the government's stimulus of large scale, which has "protected the domestic economy" amid the pandemic and boosted the tax revenue rise more than forecasted, said a government official.

The Finance Ministry said earlier this month that Japan's tax revenue in fiscal 2020 through March struck a record high of 60.82 trillion yen (553.55 billion dollars), far more than the expectation of 55.13 trillion yen (501.77 billion dollars) that the government had made taking the impact of COVID-19 into consideration.

Corporate tax revenue was unexpectedly stable, resulting from firm business income mainly posted by manufacturers even under the COVID-19 situation.

The gain in tax revenue also revealed the full influence of a consumption tax rate hike in Japan from 8 percent to 10 percent in October 2019, according to the ministry.

Japan has been struggling to improve its fiscal health, which is regarded as one of the worst among advanced economies, as social security costs are snowballing, including pensions and health care amid the sharp increase of the elderly in the population.

Under the most optimistic scenario, Japan's economy is forecasted to remain climbing at least 2 percent in real terms and more than 3 percent in nominal terms from fiscal 2021, following a contraction in fiscal 2020 of a real 4.6 percent, or a nominal 3.9 percent.

The nation's gross domestic product in nominal terms could achieve 609.2 trillion yen (5.5 trillion dollars) in fiscal 2024, surpassing the 600 trillion yen mark for the first time if the imagined growth rate is maintained, although one year later than the early projection, the office said.

The newest assessment revealed inflation will struck the 2-percent target of the Bank of Japan in fiscal 2025 under the best-case scenario, pushed back to a year earlier from the January projection.