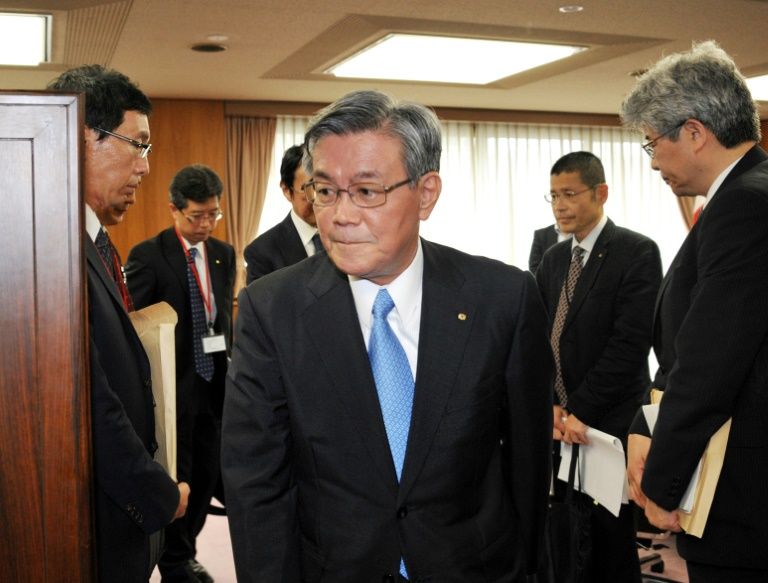 Japan's Kansai Electric Power Company chairman Makoto Yagi has resigned over a scandal which saw top executives receive cash and gifts from the mayor of a town where one of the company's nuclear plants is based (Photo: AFP)

The chairman of a Japanese power firm resigned Wednesday after admitting he and other executives received money and gifts worth around $3 million from a town hosting one of their nuclear plants.

The money and gifts were given to some 20 executives over the course of seven years from 2011 by the late deputy mayor of Takahama town, where Kansai Electric (KEPCO) has a nuclear plant.

"I and (KEPCO president Shigeki) Iwane have decided to step down to clarify our management responsibility over the situation," KEPCO Chairman Makoto Yagi told reporters after a board meeting.

Yagi's resignation is effective immediately, but Iwane will stay on until an independent probe into the scandal is complete later this year, he said.

The gifts came to light after investigations by tax authorities into the late deputy mayor Eiji Moriyama.

According to local media, tax agency investigations found that Moriyama received a 300-million-yen commission from a local construction company hired for projects at the Takahama plant.

Moriyama reportedly told tax authorities he had decided to give KEPCO officials the money in the form of both cash and gifts as a token of his appreciation.

Yagi and Iwane apologised after the scandal came to light, but initially refused to step down.

They changed their mind after being heavily criticised and realising the damage being done to the public's trust in KEPCO, executives said.

On Wednesday Iwane apologised again, and said he will assume a "last mission" of revealing the whole truth of the scandal by cooperating with the independent probe committee, which is due to issue a report in December.

The executives have said they planned to return the gifts and money "at the right time".

"We were afraid our relationship with the local government would be damaged" if the gifts and money were rejected, Iwane has said.

It was not immediately clear if KEPCO, which runs the Takahama nuclear plant with four reactors in central Fukui prefecture, will face sanctions over the incident.