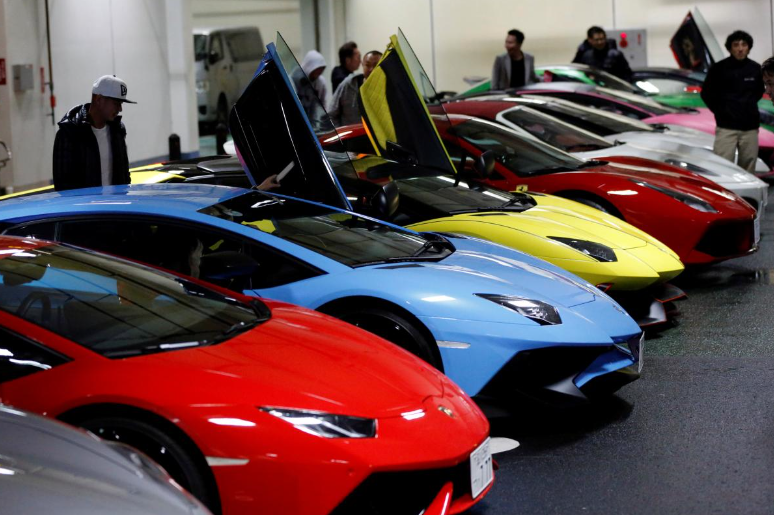 By day, the Daikoku Parking Area hums with transport trucks en route to and from the Port of Yokohama. On weekend evenings, it transforms into a revved-up runway of tuned-up Japanese cars.

The unassuming rest stop is famous to car enthusiasts as a temple of the country’s motor culture, but it also illustrates a “youth” problem that auto companies such as Toyota Motor Corp and Nissan Motor Co are scrambling to address.

The crowd last Friday - around 50 supercar fans who huddled around the back of a loading truck to get a first glimpse of the latest Lamborghini Huracan Performante delivered days before to collector Takeshi Kimura - were mainly men in their 40s and 50s.

“Today’s young people, they came of age during the recession, and some of them didn’t grow up with a family car,” said Kimura, who has earned a reputation on Japanese social media as an ambassador of car culture thanks to stunts including coasting his Ferrari F40 down ski slopes and racing his supercars around a driving school practice course.

“As a result, people hit their 20s and they’re not aware of how fun cars can be.”

On top of that, the cars whose finely-tuned growls echoed beneath the overpasses that criss-cross the Daikoku lot are mostly from the 1990s heyday of Japan’s auto industry.

Back then, Honda Motor Co, Nissan and their compatriots forged a global reputation for their stylish, fast, highly engineered cars. Drifting, the technique of sliding rear-wheel-drive cars through bends that entered popular culture through films like the Fast and the Furious franchise, was born on Japan’s winding roads.

Today, even those young Japanese who do get the car bug are unimpressed by the domestic choices on offer.

“These days automakers just aren’t making cars I’d want to drive,” said Sho Watabe, a 20-year-old student who had rocked up to Daikoku in his 1996 Mazda RX-7.

“If you look at the way cars are designed these days, they all look the same. They all lack personality ... If automakers keep making the same types of cars, young people are going to continue turning away from them.”

Japanese car makers for years have grappled with falling interest in cars among young people, which, along with a rapidly greying society, has led to a 17 percent fall in domestic vehicle sales since 2000, data from the Japan Auto Dealers Association shows.

The number of Japanese license holders aged under 30 has dropped 35 percent since 2001, according to National Police Agency data, even as the total number of license holders has increased around 9 percent during the same period.

The country’s tuning culture, once known among global car fans for its focus on squeezing as much speed as possible out of mass-market models, is also losing its pep, as complex control units and sensors make cars increasingly hard to tinker with.

To appease car enthusiasts and drum up more interest among young people, Toyota last month launched a new line of customized, sporty versions of the Prius, Yaris and other existing models in Japan under its Gazoo racing brand, which feature sports car tuning and racing trims.

Nissan is also marketing more sportier siblings of its flagship models, unveiling racing versions of its Leaf electric car and its Serena minivan at the Tokyo Motor Show this week.

“Mass market consumers want reliable, convenient cars, but we want to position Gazoo as a platform to use our ‘secret sauce’, to use our tuning capabilities to attract car fans,” Toyota President Akio Toyoda told reporters last month.

To raise brand awareness among young car fans, Toyota and a growing number of automakers and suppliers are tapping the country’s drifting culture, which has cleaned up its image  after being associated for years with illegal road racing.

“We don’t participate in motor sports in a big way, so we weren’t registering with young drivers, a small but important market for us,” said Junichi Sugano, a spokesman at Toyo Tires, known domestically as a specialist in minivan tires, which was a sponsor of the first-ever FIA Intercontinental Drift Cup held earlier this month in Tokyo.

“People who attend drift events, not all of them drift, a lot of them drive minivans.”

Longer term, Toyota has also promised to expand its sports car line-up, stoking anticipation of a revival of its popular Supra model.

Back at Daikoku, Kimura, who set up Car Guy, a crew of car enthusiasts, has some advice for Japanese manufacturers.

“If Japanese automakers want more young people to buy their cars, they have to come up with truly stylish and unique cars,” he said. “They need to come to places like this and show cars that will get kids’ hearts racing.”