Japan’s imports from China soared 114.5 percent year-on-year to 1.45 trillion yen ($13.29 billion) in February, while its imports from the US shrank 3.7 percent year-on-year in the same month. Industry observers said the trend reflects closer economic ties between the two Asian economies, which Tokyo should take into consideration before expanding diplomatic and security cooperation with Washington. 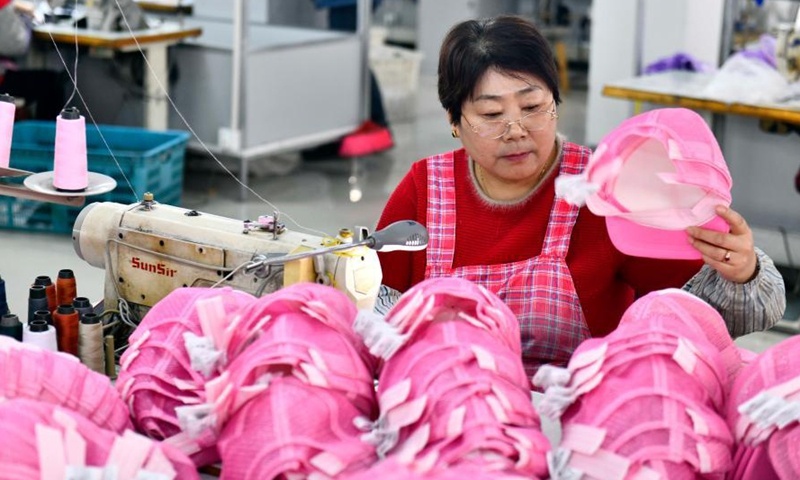 A worker makes hats to be exported to Japan at a manufacturing shop in Ligezhuang Town in Jiaozhou, east China's Shandong Province, March 4, 2021. Over the past 30 years, Ligezhuang Town, a major manufacturing base and collecting and distributing center featuring hat-related products, has achieved industrial upgrading, providing one-stop service for buyers worldwide. (Photo: Xinhua)

According to data released by Japan on Wednesday, the surge in imports from China in February marked the biggest rise since 1979 when the data started being recorded. The increase was led by a jump in telecom products such as smartphones and clothes. China’s telecom product exports to Japan doubled in February, while exports of clothes increased by 2.9 times.

That compared with a 3.7 percent drop in Japan’s imports from the US in February.

Analysts said the data reflects Japan’s high dependency on the economy of China. Given the difference in importance of the Chinese and US economy for Japan, it also sends a warning to Tokyo to be diplomatically independent. Japan has previously been seeking to extend its security cooperation with Washington, and even joined the US in a joint statement disparaging China.

US and Japanese foreign and defense ministers warned Tuesday against "coercion and destabilizing behavior" by China after the bilateral "2+2" talks in Tokyo on Tuesday.

On Wednesday, China’s Foreign Ministry spokesperson Zhao Lijian rebuked Japan’s move, saying the country was willing to “downgrade itself as a US strategic appendage.”