The chief executive officer (CEO) of Kobe Steel Ltd. will resign to account for the firm's string of data fabrication scandals that have had a wide-reaching impact on other industries and sullied the reputation of manufacturers in Japan, sources close to the matter said Tuesday. 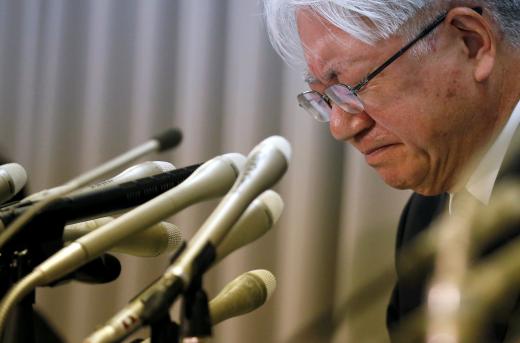 At a board meeting Tuesday, the resignations of CEO Hiroya Kawasaki, 63, as well as executive vice president and head of the aluminum and copper business Akira Kaneko, also 63, were provisionally approved, with the firm set to release its final report on the data fabrication misdemeanors later in the day.

The report is a result of a lengthy internal probe carried out by a committee comprised of lawyers.

The scandal-mired steelmaker, Japan's third-largest, said in October last year that it had found cases of improprieties regarding inspection data that failed to meet industry inspection standards.

The results of an internal probe initially found that products sold that had their inspection data fabricated were shipped to hundreds of companies.

Japan's quality control authorities subsequently revoked certification for some copper products of a Kobe Steel subsidiary and the Japanese government said it had tasked industrial standards-approved bodies to carry out inspections at Kobe Steel Ltd.'s plants.

Kobe Steel Ltd. had initially admitted to falsifying inspection data on a number of its products, including aluminum, copper, steel powder and special steel products.

It came to light that the embattled steel maker's own investigations had, additionally, revealed cover-ups and more incidents of data falsification thereafter.

Companies ranging from automakers and airplane manufacturers, to defense equipment and Shinkansen bullet train makers, have been affected by the scandal.

Kawasaki became CEO at Kobe Steel in 2013 and was known for restructuring its production protocols and adding new revenue streams to the company by enhancing the capacity of some of its minor but profitable businesses.