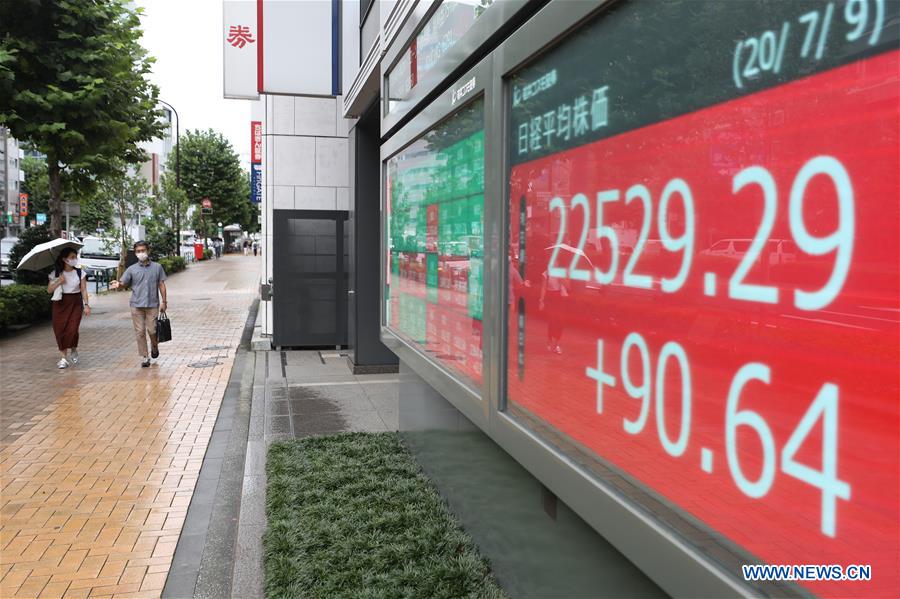 But despite giving exporters a boost, the yen's persistent weakness against the U.S. dollar remained a cause for concern Wednesday as financial authorities here said they are poised to intervene in the currency markets again as the U.S. central bank pushes ahead with its aggressive rate hikes despite fears of a U.S. recession.

Local dealers said that stocks here have been steady in comparison to their U.S. peers and would stay that way in the near term, despite the yen's persistent weakness against the U.S. dollar.

"Stocks have been performing well in Japan due to the exchange rate. So, even if earnings decline it may not have a big impact on financial results, which is why they can stay firm," said Arai.

As a result, with the Bank of Japan, in stark contrast, sticking to its ultra-loose monetary policy, the interest rate gap between Japan and the U.S. is widening, leading to a persistently weak yen, they explained.

The Japanese currency fell to a new 32-year low of 149.39 against the U.S. dollar on Tuesday in New York, leading to Bank of Japan Governor Haruhiko Kuroda saying Wednesday that the yen's recent rapid and one-sided depreciation is "negative" for the Japanese economy.

"The recent depreciation of the yen is rapid and one-sided. This type of yen weakness makes it difficult for companies to draw up business plans and raises uncertainty so it is negative for the economy and unfavorable," he said.

"We are carefully checking foreign exchange movements more frequently. We are ready to take action based on our consistent view," Suzuki said.

While the Japanese yen shifted little against the U.S. dollar during trading hours, as participants remained wary of an open or a "stealth" foray into currency markets by financial authorities here, investment researches said the yen could fall further outside trading hours.

"The yen is likely to depreciate further into the psychologically important 150 level versus the dollar later Wednesday overseas," Takuya Kanda, senior researcher at the Gaitame.com Research Institute, was quoted as saying.

By the close of play, electric power and gas, information and technology, and real estate issues comprised those that gained the most.

Exporters gained on the yen's weakness despite broader concerns about a recession hitting the U.S., with Suzuki Motor rising 1.2 percent, Honda Motor up 0.8 percent, while Tokyo Electron closed 0.9 percent higher.

Bucking the upward trend, Apple parts suppliers here lost ground, following a report the U.S. tech behemoth will slash orders for its iPhone 14 Plus amid concerns of weak demand, with the latest model only recently hitting the shelves.