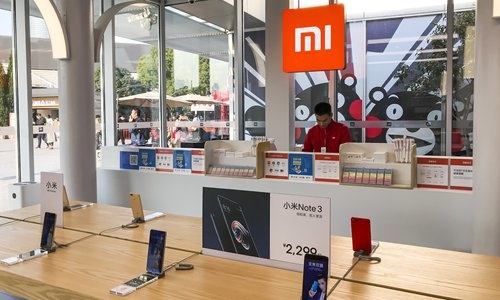 Japanese electronics suppliers are receiving more orders from Chinese mobile companies such as Xiaomi, Oppo and Vivo, against the backdrop of a growing uncertainty over the global supply chain disrupted by the US' squeeze on Chinese technology firms.

However, Chinese experts said that there would be a possibility that the Japanese manufacturers could give way to US pressure by declining new orders from Chinese mobile companies.

Japanese manufacturers of electronic components have taken a new wave of orders from Chinese smartphone manufacturers, as the Japanese companies are expecting the procurement by other companies to fill up or even exceed the lost Huawei business, Nikkei Asia reported on Saturday.

A plant of Japan Display Inc in southeast of Tokyo, which manufactures liquid crystal display panels for smartphones, said that they are running at full production capacity, the report said, citing a business representative of the company.

Some Japanese companies already received a record orders at the end of September, and others are planning to double production capacity for next year, media reported.

This came after the US ban on Huawei that led other Chinese companies to shift their supply chains to China and other neighboring countries such as Japan in a bid to reduce the unnecessary risk of US disruption.

However, experts said that given the special relationship that the Japan attaches to the US and the reliance on the US technologies among the Japanese suppliers, the risks remain for the US extension of the ban on other Chinese companies.

"Mobile phone supply chains are pretty long and complicated and Japanese companies also use some core US technologies in the production lines for Chinese companies," said Xiang Ligang, director-general of the Beijing-based Information Consumption Alliance, noting that there are cases of Japanese factories that were providing goods to Huawei terminating their supplies under the US restrictions.

In order to continue receiving new orders from Chinese technology companies while not having trouble with the US authorities, some Japanese suppliers are distancing themselves from the US in order to continue doing business with Huawei.

Sumitomo Electric Industries, for example, has started using Japanese-made equipment instead of some American equipment to test components for Huawei base stations, Nikkei Asia reported.

Hong Shibin, a Guangdong-based senior analyst of manufacturing production supply chains, told the Global Times on Saturday that he understands that there is a rising trend of Chinese mobile companies placing more orders for electronic parts from Japanese partners.

"Huawei is banned from the US, and its supply chains and market shares are bound to be split by other rivals," said Hong when talking about the reason behind the rising orders.

The Trump administration has been broadening the ban that is preventing some Chinese companies from using US technologies in the supply chains. Yet, despite the US pressure, the global mobile supply chains cannot afford losing the Chinese orders given the weak global demand caused by the pandemic, experts said.

About 240 million 5G mobile phones will be shipped globally in 2020, with the Chinese market contributing more than 160 million, accounting for about 67.7 percent, according to the latest data by international data provider IDC.

Hong noted that the US government might crack down on other Chinese mobile phone brands in the future, even though the main target for now is still Huawei, which after all is China's best technology company.

"However, if the US clamps down on Chinese tech companies, it will have unprecedented impact on the US companies, which have already suffered from the Huawei ban," said Hong.