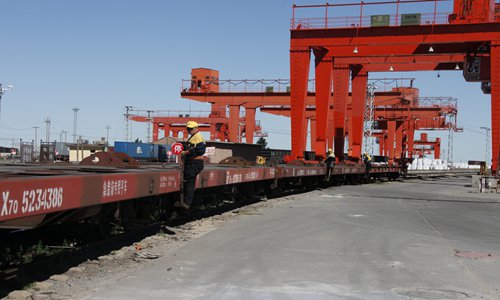 Japanese businesses and officials are ramping up their efforts to seek opportunities under the China-proposed Belt and Roadinitiative (B&R), voicing support for the massive infrastructure program and seeking Chinese officials' nod to take part in some projects in third-country markets.Japan is increasingly concerned that its multinationals might miss out on opportunities created by the B&R, which has seen significant progress in the past five years since its inception. This has prompted Japan to take a more positive stance toward the initiative in recent months, shifting from its earlier ambivalent and skeptical view, analysts noted on Sunday.The shift comes amid an improvement in the previously strained bilateral relations between the two countries, following several high-level interactions between officials from both sides. Japan's economy relies heavily on free trade, and it is trying to improve economic ties with China to counter rising trade protectionism, particularly from the US, analysts said.In the latest effort to gain access to B&R projects, a delegation of more than 200 Japanese business executives traveled to Beijing last week and met with top Chinese government officials, including Premier Li Keqiang, and Chinese business leaders.During the trip, the Japanese executives expressed growing interest in taking part in B&R projects and exploring opportunities in third-party markets."The Japanese business community is eager to participate in the [B&R] and develop markets in countries along the route with Chinese companies," Satoshi Ozawa, a senior adviser to the board of directors at Toyota Tsusho Corp, told the Global Times last week.Ozawa, who was part of the Japanese business delegation to Beijing, said that there is huge potential in third-country markets for Japanese and Chinese companies, although there are no specific investment activities, goals or a timetable.In the meeting with the delegation on Thursday, Premier Li said that China and Japan should avoid vicious competition and guide companies to jointly develop third-party markets.Tension between the two countries has eased in recent months, particularly after Li paid an official visit to Japan in May, which was hailed as opening a "new chapter" for bilateral economic and trade ties. Shift in stance"There is certainly growing interest from Japan to take part in the B&R. That is a big shift from Japan's skeptical stance on the B&R before," said Zhao Gancheng, director of the Center for Asia-Pacific Studies at the Shanghai Institute for International Studies.Zhao told the Global Times that the shift is partly because Japan has started to recognize the scope and benefits of the B&R. "They first sought to counter the B&R because they thought it was China's strategy to gain influence in Asia and other regions. But now they have recognized that they can't win in vicious, zero-sum competition so they choose to cooperate with China," he said.Japan has introduced its own trade strategies, which were seen as an effort to counter the B&R. But Japanese officials have warmed up to the B&R, including Prime Minister Shinzo Abe, who has spoken positively about the initiative several times since last year.In choosing cooperation over rivalry with China, Japan is also trying to counter a rising wave of global trade protectionism, said Chen Zilei, director of the Research Center for Japanese Economics at the Shanghai University of International Business and Economics."Japan's economy depends on free trade and trade protectionist moves from the US pose a risk for Japan. So really, they don't have any choice but to improve ties with China," Chen said.Analysts said there is plenty of room for cooperation under the B&R."Chinese companies possess the capabilities to undertake large-scale projects, while Japanese companies hold technological advantages in some key areas, so they can combine that in some projects," Zhao said.