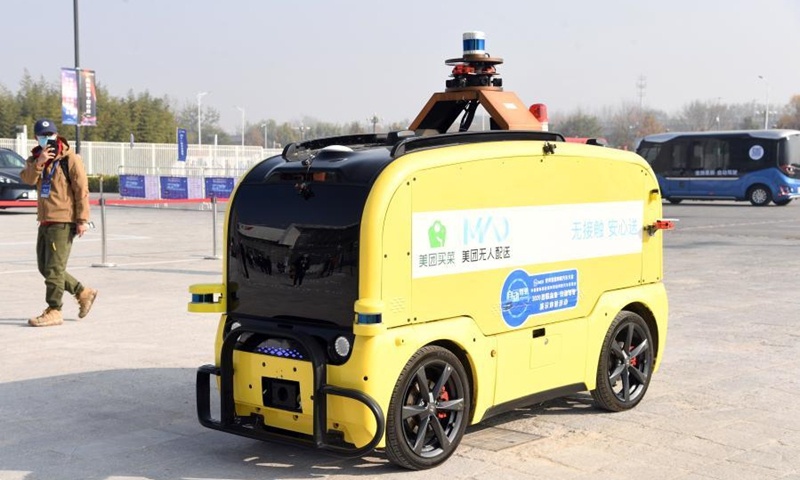 China's JD.com, Meituan and Neolix on Tuesday obtained approval to test their self-driving delivery vehicles on designated public roads within the Beijing Economic and Technological Development Area, in southeastern Beijing's Yizhuang area, which marks another breakthrough in the country's autonomous-driving sector toward commercialization.

Neolix CEO Yu Enyuan said that the permit will help it boost innovations and R&D for unmanned delivery vehicles to run on public roads and intra-industrial parks so as to boost its commercialization, according to a report on the website of the Beijing Economic and Technological Development Area.

Neolix is a start-up specialized in making driverless logistical vehicles, while JD and Meituan develop autonomous delivering systems to assist their core businesses.

JD released its first generation of autonomous delivery vehicle in 2016, and has adopted the robots in over 20 cities in China as of April 2021. Unsupervised, the vehicle drives itself from JD's delivery station loaded with parcels, and plans its own route based on the delivery address of each parcel.

At the Tuesday event, local authorities released autonomous delivery vehicle management framework - the first of its kind in the country.

According to the rules, these companies' unmanned delivery vehicles are categorized as "non-motor vehicles," which means that they will run next to bicycles instead of automobiles.

More importantly, the document sets up standards for the size, weight, speed and other features for the robotic vehicles to put under supervision along with self-driving passenger cars and buses, while requiring that there should be safety drivers "on the spot and remotely" during early days of road trials.