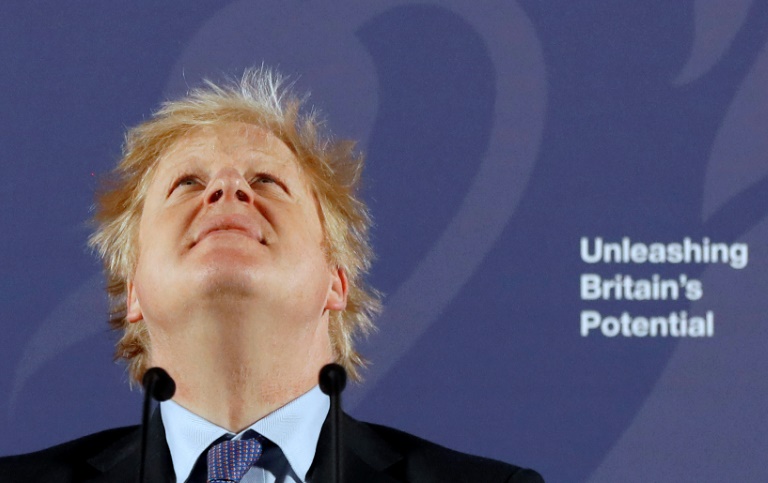 Prime Minister Boris Johnson pledged to restore full sovereign controls over a number of areas as Britain and the EU begin to ponder their post-Brexit future. (Photo: AFP)

Britain and the EU laid down Monday their red lines for post-Brexit trade talks, offering contrasting visions for their future relationship that raise the prospect of clashes to come.

But he still pledged not to "undermine EU standards", after the UK finally went its own way on Friday after nearly half a century in the bloc and an 11-month transition period began.

Worries over trade negotiations sent the pound sinking more than 1.1 percent against the dollar in London midday deals on Monday.

"I see no need to bind ourselves to an agreement with the EU," Johnson said in a speech at the Old Royal Naval College, which chronicles Britain's past as a maritime superpower.

He added: "We will not engage in some cut-throat race to the bottom.

"We are not leaving the EU to undermine European standards. We will not engage in any kind of dumping, whether commercial, social or environmental."

Barnier said fisheries and fair trade would be his top priorities in the talks, with a special focus on denying Britain "unfair competitive advantages".

Brussels will offer a close post-Brexit trading relationship -- but will demand tough terms on fisheries and a level playing field for businesses, he said.

His vision flies in the face of that of Johnson, who insists that Britain's alignment with Europeans on rules and regulations defies the spirit of Brexit and was a thing of the past.

"We are ready to offer a highly ambitious trade deal as the central pillar of this partnership, including zero tariffs," Barnier told a news conference.

"We must now agree on specific and effective guarantees to ensure a level-playing-field over the long term," he said.

"That means a mechanism to uphold the high standards we have on social, environmental, climate, tax and state aid matters today and in their future developments."

Johnson railed against protectionism as a brake to the growth of the world economy and argued Britain had no more reason to meet EU standards than the bloc has to meet British ones.

"There is no need for a free trade agreement to involve accepting EU rules on competition policies, subsidies, social protection, the environment or anything similar, any more than the EU should be obliged to accept UK rules," he said.

Both sides have until the end of the transition period to reconcile their positions, with Johnson flatly refusing to extend the negotiating period beyond December 31.

Until then, Britain has agreed to abide by the rules of EU membership, but failing a deal, the two sides would resort to the most basic of relationships with border checks and high tariffs causing big shocks to the cross-channel economy.

Johnson, a polarising figure accused of glossing over the complexity of leaving the EU, is in a rush to seal a deal and deliver the "independence" promised by Brexiteers.

This would also open the way for Britain to seal ambitious trade deals across the globe, most notably with the United States.

Brussels has repeatedly warned Britain the depth of future trade ties depends on how closely London adheres to EU standards -- what is known as maintaining the level playing field.

"The closer the UK wants to be, the easier the access to the single market. But nothing comes for free," European Commission President Ursula von der Leyen told reporters.

"It's of utmost importance, and therefore I think it's only a matter of fairness to also play by the rules," she said.

Britain has asked for the EU's trade deal with Canada to be used as a model, which Europeans consider acceptable on tariffs and quotas, but too weak on provisions to guarantee fair trade.

Barring that Johnson said Britain would be happy to match the EU's current ties with far-away Australia, which include tariffs, quotas and some basic cooperation on product safety.

Barnier's negotiating mandate will be discussed and approved by the EU's 27 member states later this month with direct trade talks with London to begin in early March.