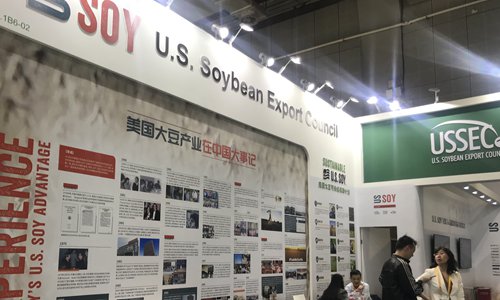 Imports from the US have made steady progress in recent months, yet joint efforts from firms on both sides are still needed for the phase one trade agreement to overcome the difficulties caused by the COVID-19 pandemic, said a Chinese official.

Ning Jizhe, deputy head of China's National Development and Reform Commission (NDRC), the country's economic planner, recently participated in a video call with US-China Business Council President Craig Allen and representatives of US member firms. During the call, Ning said China has done a lot of work to promote the implementation and expansion of the phase one trade deal with the US since it was inked, and positive progress has been made in expanding imports from the US, according to the NDRC website.

However, the import speed of certain goods and services from the US has slowed due to the COVID-19 pandemic and low market supply and demand, as well as US export controls on some goods, Ning said, while expressing his hope that firms on both sides will work together to overcome difficulties and further expand cooperation.

Dong Shaopeng, a senior research fellow at the Changing Institute for Financial Studies at the Renmin University of China, told the Global Times on Thursday that based on the forecast of a full year's imports from the US, it will be hard to fulfill the promised imports or purchase targets as set out in the deal.

In the first half of the year, China's trade with the US plunged in contrast to the overall upbeat trend in China's foreign trade. Bilateral trade denominated in the yuan dropped 6.6 percent in the first half year-on-year. China's imports from the US were down 1.5 percent to 395.62 billion yuan ($56.49 billion) in January-June, according to China's General Administration of Customs.

After a 22-month trade deadlock and a series of strenuous negotiations, China and the US signed the phase one trade deal in January, with China agreeing to purchase an additional $200 billion in US goods by the end of 2021 from 2017 levels.

The gloomy global trade environment caused by the COVID-19 pandemic still faces huge pressure in recovery, Dong said. "But China is still actively implementing the trade deal by expanding imports from the US."

By the end of the first half, China had purchased about 23 percent of the total target of more than $170 billion of goods in 2020, according to Bloomberg calculations based on China Customs data, showing an uptick on a month-on-month basis from May's 19 percent.

"It is noticeable that the US' export controls via its Entity List to restrict high-tech exports to China has reduced shipments in this area," Dong said, "which is unfair to let China act as a one-man show without the US' cooperation."

For farm imports specifically, US soybeans, which takes about half of US agricultural goods shipped to China, has witnessed a buying spree over the recent period.

The rapid recovery of China's swine sector and poultry production have pushed up soybean meal use for feed imported from the US, and purchases and shipments of soybeans from the US has accelerated recently, industry analysts said.

Data from the US Department of Agriculture showed as of the week ending July 16, accumulated exports of US soybeans to China recorded 13.26 million metric tons in the 2019/20 marketing year which started from September 1 last year.

However, China's US farm purchases amounted to $6 billion through May this year, a big gap from the year's purchase target of $36.5 billion, according to Reuters.

Jiao Shanwei, editor-in-chief of cngrain.com, a website specializing in grain news, told the Global Times Thursday that despite the current buying spree which propped up some optimism in the market, prospects are still uncertain given the recent fallouts.

"Besides, it's nearly harvest time for China-grown grain which starts in September, which will also squeeze some market share for US farm imports," Jiao said.

Concerns have been rising recently as to whether the worsening relations of the world's two largest economies will undermine the phase one trade pact.

China is willing to expand imports based on market-oriented principles but if the purchase target cannot be met due to objective factors, the two sides should return to the negotiation table in a calm manner, Dong said.