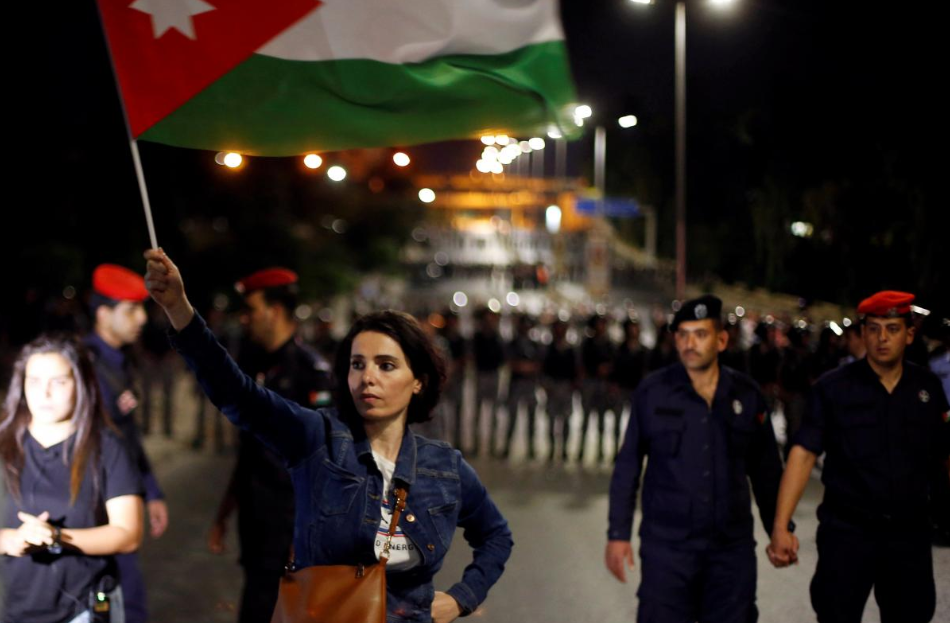 A protester holds up a Jordanian national flag during a protest in Amman, Jordan June 4, 2018 (Photo: Reuters)

A palace statement said King Abdullah left for Jeddah to attend a summit called by Saudi King Salman who invited leaders of Kuwait and the UAE to discuss ways of helping the kingdom overcome deepening economic strains that sparked last week’s peaceful protests.

Officials are hopeful the Jeddah meeting will approve a major package in line with a previous $5 billion fund allocated to Jordan by Gulf monarchies in December 2011 to contain pro-democracy unrest that spread across the region.

The funds that were tied to developments projects had helped spur its aid-dependent economy.

An official who requested anonymity told Reuters a deposit to cushion dwindling existing reserves of $11.5 billion would have a significant impact on easing pressures on a deficit-ridden budget where spending goes mainly to covers public salaries.

In the past, foreign aid has sometimes financed almost half the country’s budget deficit.

The financing of highways, hospitals and ageing infrastructure by Saudi Arabia, Kuwait and the United Arab Emirates had indirectly relieved pressure on the kingdom by reducing the need for large capital spending, another official said.

Thousands of Jordanians hurt by price hikes took to the streets last week against the government’s IMF mandated economic policies. The rare peaceful protests prompted King Abdullah to sack the government and appoint a new prime minister whose first pledge was to reverse plans was to shelve steep tax hikes.

In a statement released by the royal palace, King Abdullah was quoted as saying Riyadh had stood by Jordan “in all circumstances”.

Western diplomats say the protests have worried conservative Gulf states who fear instability in the staunch US ally Jordan that has long backed their foreign policy positions could have repercussions on their own security.

Officials say the kingdom’s economic strains have worsened with the end of the Gulf grant and little extra funds by Western donors in the last few years to cope with the burden of thousands of Syrian refugees the kingdom hosts.

They say the Syrian crisis had also meant Jordan was losing out on business opportunities and foreign investment inflows.

Jordan’s key role in protecting geopolitical stability in the Middle East already makes it one of the highest per capita recipients of foreign aid in the world, according to figures from USAID, the US aid agency.