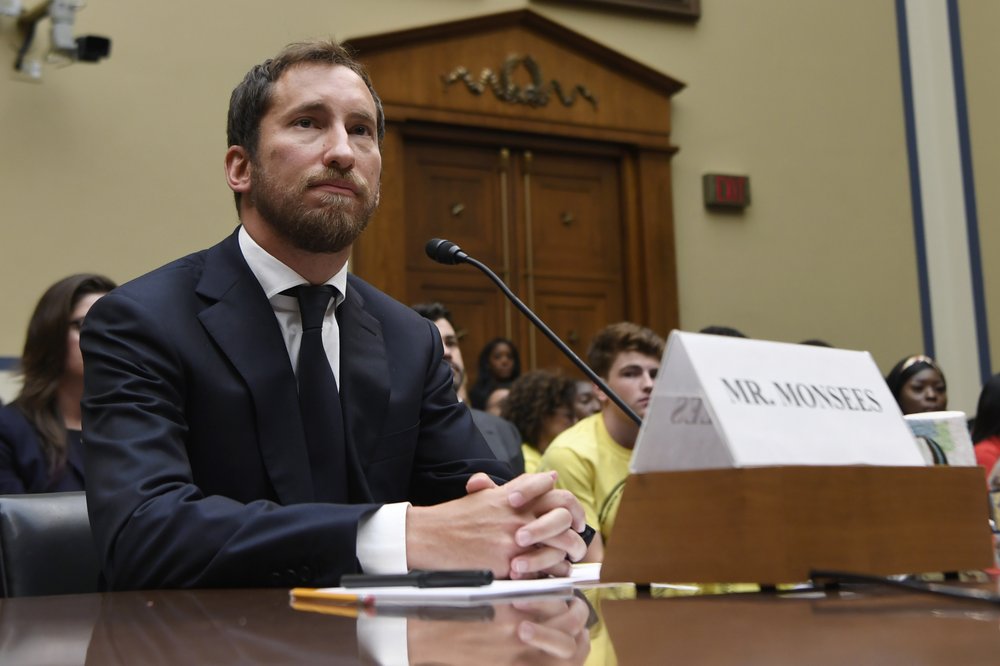 A top executive for Juul Labs said that his company never intended its electronic cigarettes to be adopted by underage teenagers, as US House lawmakers on Thursday accused the company of fueling the vaping craze among high schoolers.

Thursday’s hearing marks the first time Juul has been called before Congress, despite growing scrutiny from parents, politicians and public health advocates. Federal law bans the sale of e-cigarettes to those under 18.

Drawing from some 180,000 documents collected from the company, House Democrats peppered Monsees with questions about the early ads and marketing that they contend led to the current wave of underage vaping by US teens.

“We must trace the origins that led to this epidemic,” said Rep. Raja Krishnamoorthi of Illinois, who chairs the economic subcommittee of the House Committee on Oversight and Reform.

The Democrat convened two hearings this week after launching an investigation last month into Juul’s marketing, technology and business practices. The privately held company has grown into a multibillion-dollar business on the success of its small, discrete vaping device and nicotine pods.

Krishnamoorthi questioned Monsees about what he said were similarities between the design of the original Juul device and packaging for Marlboro cigarettes. He cited minutes from a 2016 Juul board meeting that mentioned a settlement with Philip Morris International, which sells Marlboros outside the US, to remove triangle and diamond shapes from Juul branding. Monsees said Juul paid “zero dollars” as part of the settlement.

“There was never any intent,” to copy Marlboro, Monsees said. “The last thing we wanted was to be confused with any major tobacco company.”

During his testimony, Monsees reiterated past steps taken by Juul, including shutting down its Facebook and Instagram pages and pulling several of its flavored pods out of retail stores to keep Juuls out of the hands of teens.

Monsees said he understands the negative scrutiny of his company, but assured lawmakers Juul’s aim is to “eliminate cigarettes for good.”

“This is an industry that has done wrong for a truly long period of time,” Monsees said. “We are changing that from the inside out with products delivered by innovative people and a company that is 100% committed to changing the fabric of this market.”

Neither Juul nor any vaping product is approved yet to help smokers quit.

Later in the hearing, lawmakers questioned Juul’s chief administrative officer, Ashley Gould, about documents they said showed Juul offered $10,000 to some schools for anti-vaping educational programs. Gould said Juul only gave funding to six schools or youth programs and discontinued the program in 2018 after learning that tobacco companies had funded similar anti-smoking programs decades ago.

E-cigarettes typically heat a flavored nicotine solution into an inhalable aerosol. They are largely viewed as less harmful than traditional paper-and-tobacco cigarettes and some adult smokers use them as an alternative source of nicotine.

Monsees told lawmakers the comment was misinterpreted. Instead, he said Juul had learned the “bad actions” of those companies and what “not to do,” from Jackler’s archive of tobacco advertising.

Juul grew out of graduate work by Monsees and co-founder Adam Bowen, both Stanford design students.

The company’s rise has closely tracked an explosion of underage vaping. Last year, 1 in 5 US high school students reported using e-cigarettes in the last month, according to government survey figures. Juul has become a scourge in US schools with students vaping in restrooms, hallways and even classrooms.

Another committee member, Rep. Katie Hill, D-Calif., said that internal Juul documents indicate the company had at one point sought to aggressively use social media to market its products, with potentially hundreds of social media influencers. Influencers are social media users that have large online followings and established credibility with their audience, according to Hill. She said the company told the subcommittee ahead of the hearing that it used influencers sparingly.

Monsees said that he wasn’t familiar with the contracts she cited and told Hill the company had tried “a number of different things.”

The US Food and Drug Administration gained authority to regulate e-cigarettes in 2016, but the agency has repeatedly postponed a deadline for vaping companies to submit their products for health and safety review. Earlier this month, a federal judge sided with public health groups who sued the FDA and ruled that vaping companies must submit their products for review by next May.