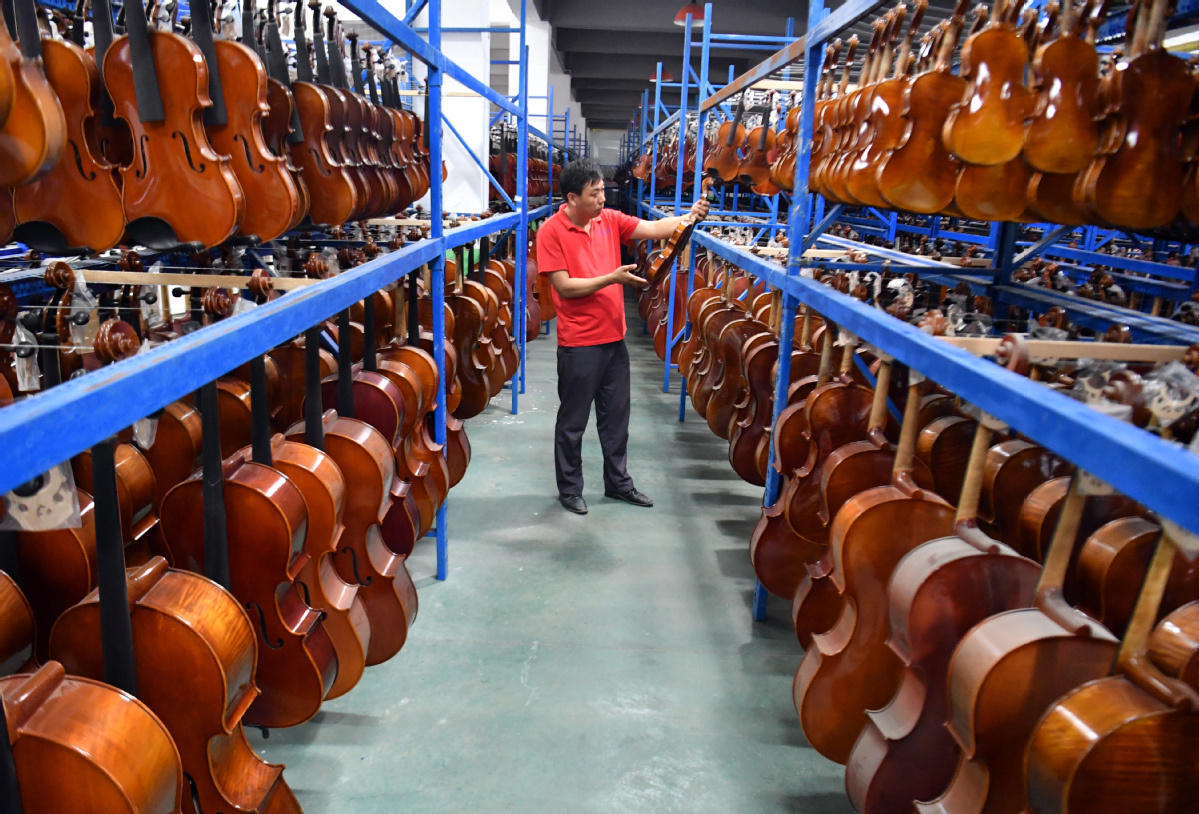 An employee checks the quality of violins and cellos at a manufacturing plant in Queshan county, Henan province, a leading manufacturing hub for stringed instruments.(Photo: Xinhua)

When a group of farmers from Queshan county, Henan province, quit planting crops and came to Beijing for better incomes in the 1980s, little did they know it was the start of a violin making industry that would not only help farmers emerge from poverty, but also turn Queshan into the country's leading manufacturing hub for the stringed instruments.

"Many of them came to Beijing with a simple wish to help their families emerge from poverty back in the 1980s. Some of them started off in violin manufacturing studios and had positive experiences. Others even started their own violin making businesses after years of learning. They continued introducing families, friends and hometown neighbors to Beijing for the same job," said Jiang Hexi, 38, a Queshan-born luthier at Queshan-based Henan Hao Yun Musical Instrument.

Jiang was among the many who were introduced to making violins in Beijing by a friend from his village.

"In 2001, a friend introduced me to Hao Yun, which was then located in Beijing and founded by a Queshan native. At that time, the internet was not widely used in my village and information was not as accessible as now. Introduction from close friends and relatives became a common and reliable way of finding jobs," Jiang said.

He said working as a luthier gives him a sense of accomplishment. "It may be hard to believe that a farmer with little knowledge of music from a small county can make good violins and help people pursue their musical dreams," Jiang said.

With more people from Queshan moving to Beijing and working in the violin industry, the local government began to take notice. In 2015, Queshan authorities launched a series of preferential policies to attract Beijing-based luthiers back to their home county, relocate or start violin making businesses. The goal was to make Queshan China's leading violin manufacturing hub, boost the local economy and create more job opportunities.

Hao Yun, the company Jiang works for, is one of the enterprises that relocated from Beijing to Queshan.

"The Queshan government has many supportive policies like tax cuts and rent waivers for our factory. That is one of the reasons that we came back. We also want to run a business that does good not only for us but for more people in our hometown," said Guo Xinshe, general manager of Hao Yun.

Jiang also moved back to his hometown with Hao Yun. Now he is the director of the assembly department.

"Compared with working in Beijing, working in my hometown is much easier and more comfortable. Back in Beijing I only got the chance to visit my parents and kids once or twice a year in order to save money. But now I can see them every day and take care of them. The salary is about the same here as in Beijing, at about 10,000 yuan ($1,530) per month," Jiang said.

Queshan now has about 102 violin manufacturing facilities that provide jobs for over 2,600 people.

Zhou Minliang, a senior researcher at the Institute of Industrial Economics of the Chinese Academy of Social Sciences, said the growing violin manufacturing industry in Queshan is becoming a pillar of local economic development by offering more job opportunities and generating more tax revenue.

Zhou said that spurred by the growing violin making industry, more manufacturers may be attracted to set up units in Queshan and thus form a relatively complete industry cluster, which is important for regional development as this model helps source components more efficiently and increases local companies' market influence.

"It is important that the government offers corresponding measures to foster a better business environment to promote forming an industry cluster, including more convenient administrative procedures and better infrastructure," Zhou said.

Zhou added that Queshan's violin industry also faces challenges in terms of how to upgrade and transform to high-quality development.

He said many violin makers in Queshan are original equipment manufacturers－companies that produce parts or whole items that are marketed by other manufacturers－and a large portion of their products go to value-added resellers who take a big portion of total profit from the violins.

"Those companies need to step up efforts to build brands and develop value-added services to move up global value chains," Zhou said.

With the gathering of labor, capital and resources, many villages, counties and small-sized cities in China are developing pillar industries that are well-known both at home and abroad, which is essential for those areas to boost regional economies.

But just eight years ago, Tianzhen was among the most poverty-stricken counties in the nation.

Located in northeastern Shanxi, Tianzhen has a relatively short growing season. Farmers in Tianzhen only have four to five months a year to do field work and make money. Although many who work in the fields have found second jobs to supplement their incomes, very few thrived due to a lack of skills and limited educational backgrounds.

In 2012, the local government decided to promote the home care services sector as a major means of poverty alleviation in Tianzhen. Government officials have been working to help locals receive free occupational training at Tianzhen Sunshine Vocational Training School.

Li Chun, the school's headmaster, said they offer free training to students in entry and mid-level classes, and introduce students to jobs providing decent incomes in Beijing and other cities for free. Li said the school received a lot of financial support from the government.

The school was founded in 2011 with an investment of 50 million yuan. Most of its graduates are now working in Beijing, Tianjin, Shanghai and some other first and second-tier cities. A total of 12 students even found jobs in the United States and Japan, with monthly salaries ranging from 11,000 yuan to 20,000 yuan.

"Encouraging Tianzhen residents to study new skills was harder than we imagined. Most of them have lived in Tianzhen since they were born and never stepped out of the county. A majority of them feared going to other cities alone, especially those in their 40s or 50s. Many were quite old-fashioned and considered offering home care services and taking care of other people to be somehow shameful, as did their families," said Fu Xiaoyan, deputy head of Tianzhen Sunshine Vocational Training School.

"But with more people going outside, making money and learning new skills, many people changed their views. Now some think that rather than just making more money, going to Beijing and interacting with people from different backgrounds is an eye-opening experience," Fu said.

Cao Guohua, 55, from Tianzhen, was among the many who found a job as a home care service provider in Beijing.

"I couldn't believe doing housework and taking care of seniors－simple tasks that I used to do for my family for free－could help me earn about 50,000 yuan a year in Beijing," Cao said.

She began studying at the training school in 2017. Before that she worked in farms and was responsible for her entire family's expenses as her husband was disabled.

"Farm work only provided our family about 10,000 yuan per year, even with my sons' incomes combined, which was just enough for food and housing. When I heard about free training and job opportunities in Beijing, I registered without any hesitation. Some of my peers were reluctant because they fear leaving the village, but I didn't think of it that way. I thought it was a great opportunity for people at my age to go outside, earn more and learn more," Cao said.

In 2017, Cao studied housekeeping and eldercare at the school, and a month later, she boarded a train to Beijing.

"My first client was a grandma in Beijing who was diagnosed with lung cancer. I took care of her for over three months, and then I switched to another family. I earned about 50,000 yuan to 60,000 yuan per year from 2017 to 2019, and used the money to pay off our family debts and decorate our new apartment," she said.

"With China achieving its goal of ending absolute poverty by the end of 2020, governments and companies are stepping up efforts to develop pillar industries－an effective and sustainable way to boost regional economic development," said Zhou of the Institute of Industrial Economics of CASS.

"It is also important to promote vocational training among people from impoverished areas and also set up mechanisms, such as rolling out preferential policies, to attract talent, professionals and encourage young government officials to work in those areas for better development," Zhou said.