The Annual Conference of Financial Street Forum 2022, concluding here Wednesday, has featured senior officials from China's monetary and financial authorities, who spoke about reform and high-quality development of the country's financial sector.

Here are some key takeaways from their speeches and remarks during this three-day conference. 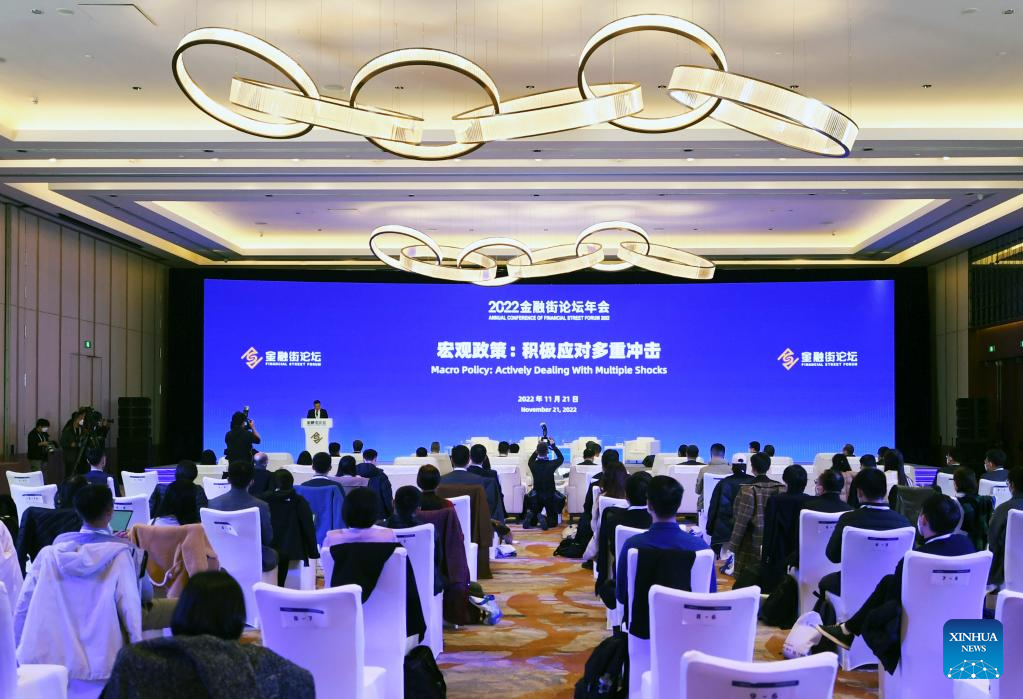 This photo taken on Nov. 21, 2022 shows the scene of a session themed "Macro Policy: Actively Dealing With Multiple Shocks" during the Annual Conference of Financial Street Forum 2022 in Beijing, capital of China. (Photo: Xinhua)

Due to their awareness of the challenges and downward pressure faced by the Chinese economy this year, authorities opted to adjust the monetary policy in a timely fashion in order to provide greater support to the real economy, according to Yi Gang, governor of the People's Bank of China (PBOC).

Thanks to prompt policy adjustments, China has kept the economy stable and preserved price stability at home despite surging inflationary pressures worldwide, he said.

Yi pointed out that the central bank also leveraged structural monetary policy tools to enhance support for agriculture, small and medium-sized enterprises, private companies, and other structural weak links on the supply side, making finance more accessible, available and affordable.

Regarding the housing market, Yi said the PBOC has tailored policy solutions to local specificities, including cutting mortgage rates and down payment ratios to support real housing needs.

Fu said he expects the Chinese economy to not only expand in scale but also embrace structural improvement next year, propelled by green industries and other new growth drivers.

"Compared with the previous two periods of U.S. dollar appreciation, the renminbi exchange rate has become less sensitive to U.S. dollar index fluctuations since 2021," he said.

"Globally, compared with the currencies of major developed and emerging markets, the depreciation of the renminbi is at an average level. Despite fluctuations, cross-border capital flows have been stable and orderly on the whole," Pan added.

Pan, also the deputy governor of China's central bank, attributed the forex market's resilience to the renminbi's two-way fluctuation and flexibility, a surplus in the basic international balance of payments, the improving foreign debt structure, and the promotion of exchange rate hedging instruments.

"We will, as always, welcome foreign financial institutions with sound operations, good qualifications and outstanding specialties to participate in the Chinese market," Guo said.

Yi Huiman, chairman of the China Securities Regulatory Commission, said China's capital market has explored a path that "follows the general laws of the capital market and at the same time boasts Chinese characteristics."

Past work that has shaped this path includes pushing reform on the registration-based initial public offering system, improving the quality of listed companies, and establishing special risk control mechanisms, according to Yi.

To build a modern capital market with Chinese characteristics, he said efforts will be made to tackle problems such as the structure and valuation of listed companies, the culture of capital market investment, as well as investor structure.

Noting that China has over 200 million individual investors, Yi pledged that while continuing to encourage institutional investment, more emphasis will be placed on the protection of the legitimate rights and interests of small and medium investors.