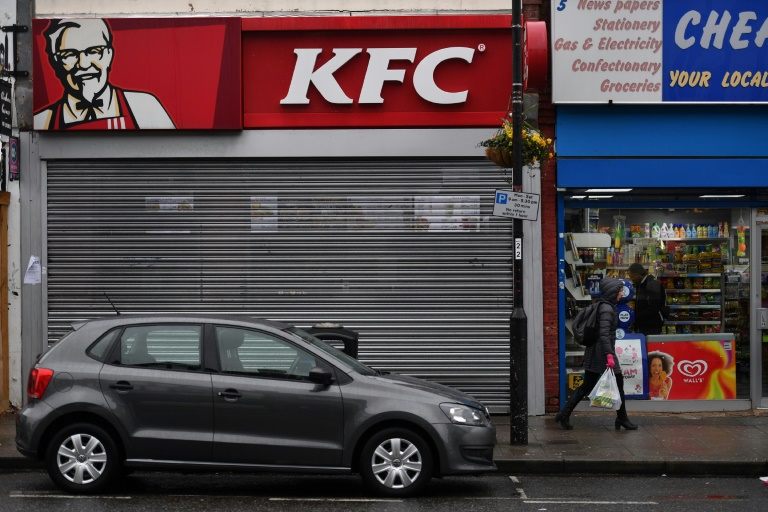 Less than a third of KFC's outlets in Britain remained shut Wednesday afternoon, following a supply crisis that closed hundreds of its restaurants and left customers struggling to find their deep-fried chicken fix.

Around 628 of the American fast-food chain's 900 British outlets were open by mid-afternoon, according to an online list updated by KFC.

"I want my burrito wrap!" 31-year-old Karen Brian told AFP outside an outlet at Victoria Station in central London, which the company said was among those to reopen later Wednesday.

"KFC is a well-known brand and they can't sell chicken?" she said, adding that she would be heading to rival McDonald's even though "it is not that good".

Kustiyah Bego, 42, also expressed disbelief: "It doesn't make sense for me. I eat chicken every day."

"I don't understand. Is there really a lack of chicken?" she said.

The poultry shortages, blamed by KFC on a switch to a new delivery supplier, started over the weekend, with problems expected to persist all week in some parts of Britain.

"We anticipate the number of closures will reduce over the coming days as our teams work flat out all hours to clear the backlog," a KFC spokesman told AFP.

Some outlets will remain closed while others may operate with a reduced menu or shortened hours, he added.

The spokesman said the costs of the crisis on the firm were "significant".

The issues have lead to widespread online mockery for the chain.

"So @KFC have run out of chicken. This is how the apocalypse starts," wrote Twitter user @jonevans78, while @Brad_Langford said: "How will the nation cope?"

Others, like meat substitute maker Quorn, spotted an opportunity, with the company tweeting its offer of "Quorn Crispy Nuggets for a meat-free alternative". 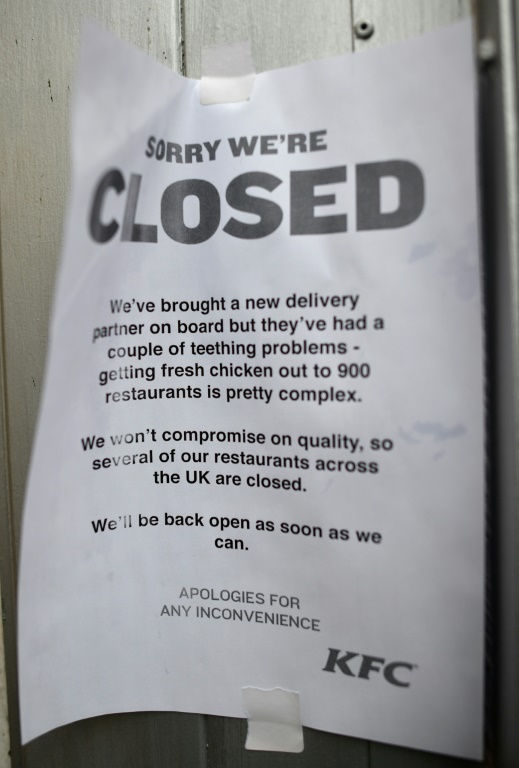 There were reports of desperate KFC employees taking the initiative and buying chicken themselves, while the Daily Mail newspaper reported that crates of undelivered chicken at a depot for German delivery supplier DHL would have to be destroyed.

"Some chickens have now crossed the road," the company said on Twitter, providing customers with a link to the list of open restaurants.

"We're looking at all options to minimise wastage," the spokesman added.

"To be clear, nothing will leave for delivery or be served at our restaurants that doesn't meet our incredibly high standards."

The crisis erupted over the weekend when KFC switched its delivery contract to DHL from South African-owned supplier Bidvest.

"We've brought a new delivery partner onboard, but they've had a couple of teething problems -- getting fresh chicken out to 900 restaurants across the country is pretty complex," KFC said.

"We know that this might have inconvenienced some of you over the last few days, and disappointed you when you wanted your fried chicken fix," the company added.

The GMB trade union said earlier that the closures were the result of KFC's "bird-brained" decision to switch supplier, saying it had caused 255 redundancies and the closure of a Bidvest depot.

"We tried to warn KFC this decision would have consequences -- well now the chickens are coming home to roost," GMB's national officer Mick Rix wrote.

"Bidvest are specialists -- a food distribution firm with years of experience; DHL are scratching around for any work they can get to undercut them," he said. 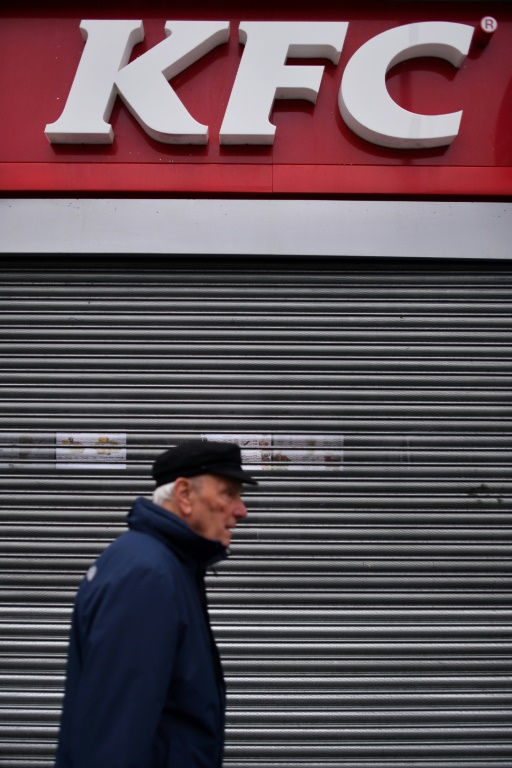 There were reports of desperate KFC employees taking the initiative and buying chicken themselves. Photo: AFP/Ben Stansall

With some customers apparently suffering withdrawal symptoms, one London police department tweeted: "Please do not contact us about the #KFCcrisis -- it is not a police matter if your favourite eatery is not serving the menu that you desire."

DHL's managing director of retail, John Boulter, said the delivery firm was working to "return to normal service levels as soon as possible.

"The reasons for this unforeseen interruption of this complex service are being worked on," he added, although he did not give the exact reason for the problem.

"We are committed to step-by-step improvements to allow KFC to reopen its stores over the coming days."

KFC confirmed DHL is still waiting for an application for a cold storage license to be completed, but added local environmental health officers visited the firm's facility Tuesday and "were satisfied with all arrangements".

"They should rectify this," she said.

Pitcher said she normally goes to KFC twice a month and particularly liked the bucket portions.

"I can understand why people are angry or sad but it is not worth being upset."