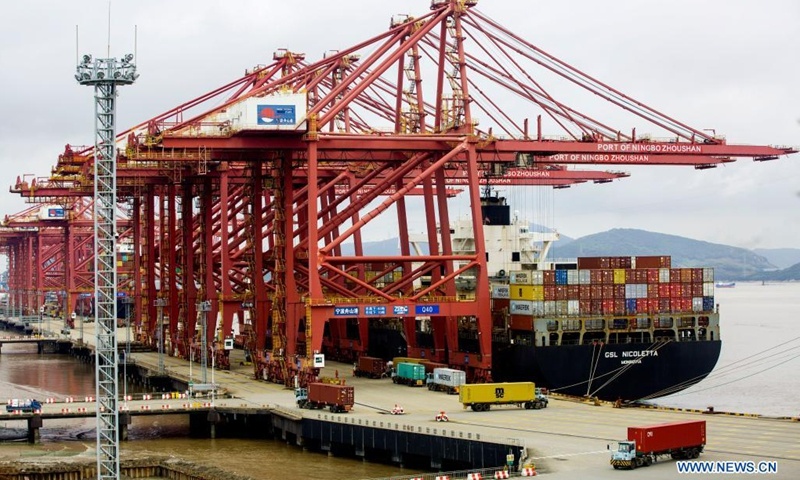 One week after the suspension of operations of a terminal at East China's Ningbo Zhoushan Port - one of the world's busiest cargo ports - due to a positive COVID-19 case, a knock-on effect on global and domestic logistics has emerged.

However, the port operator said that the port retains nearly 90 percent of its throughput capacity and that the daily throughput is improving from July. And some global shipping giant said their operations have not been affected.

A shortage of containers has pushed up freight rates and stricter pandemic prevention measures mean that it's taking more time for docking and unloading, according to industry sources.

The Meishan Wharf of Ningbo Zhoushan Port confirmed to the Global Times on Wednesday that operations have been suspended since August 11 and containers cannot be shipped out.

"Some of my shipments are piled up at the Meishan Wharf. I have transferred some other goods to nearby terminals at the Ningbo Zhoushan Port. There is no way to ship my goods from other ports, because there will be additional freight costs," a freight agent surnamed Zhao, who is based in Ningbo, told the Global Times on Wednesday, noting that other ports in China are as busy as Ningbo.

Zhao said that his biggest concern is whether some time-sensitive goods, such as Christmas supplies, can be shipped on time, though some urgent goods have been delivered by China-Europe rail services.

"As far as I know, the ship scheduling of other ports also takes one to two weeks, depending on the destination. North America is the busiest destination, requiring longer scheduling time," Zhao added.

While some logistics companies and exporters have been affected, others, including global shipping giant Maersk, said there has been little impact.

"Maersk vessels do not have port calls in the Meishan terminal as our vessels berth at the Beilun port area in Ningbo. Therefore, there is currently no impact on Maersk vessels," Maersk told the Global Times on Wednesday.

Maersk said that it has a VSA service AC6 running between Asia and South America, which calls at the Ningbo Meishan terminal, and port calls in August will be omitted.

However, as the Ningbo Meishan Free Trade Port Area was also closed, a Maersk warehouse in the area has ceased operations as requested, the company said.

"If Meishan terminal is closed for an extended period, there could be a chain reaction because other ports in Ningbo cannot fully absorb cargo transferred from Meishan. It's similar to what happened when Yantian Port in South China was closed," an industry insider, who works in a port in East China's Shandong Province, told the Global Times on the condition of anonymity.

The insider added that shipments scheduled to be docked at Meishan will likely be transferred to other terminals at Ningbo Zhoushan Port, instead of other ports in China.

"The design capacity of a port should reflect whether other terminals can absorb shipments if one terminal suspends operation for equipment inspection and maintenance. But Ningbo Port could still face overloading if the Meishan terminal remains closed," the person noted.

Another industry insider from Shandong told the Global Times on Wednesday that the strict quarantine measures are still complex, as the procedures include isolation and medical observation of crew members, especially from international ships, as well as disinfection of the ships and their cargo.

The closure of the terminal is not only affecting international shipments - it is also gradually affecting domestic logistics.

"The decrease in the daily handling of cargo will result in back-ups of ships and vehicles. Then as containers are held up, a shortage could occur. Goods also have to undergo disinfections, which increases the time and cost of transportation," a manager of a cold-chain logistics company based in Beijing told the Global Times on Wednesday.